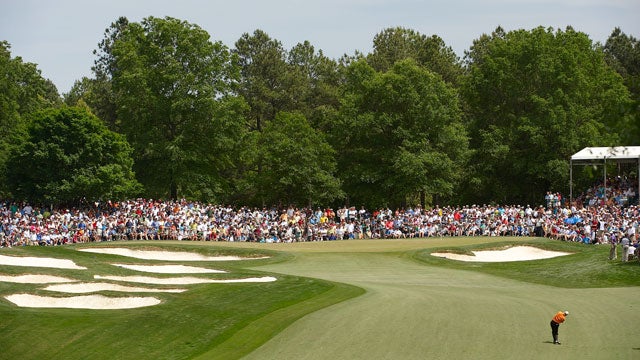 Scenic view of Jim Furyk in action, taking third shot on No 5 during Saturday play at Quail Hollow Club in the 2009 Wells Fargo Championship.
Fred Vuich

CHARLOTTE, North Carolina (AP) — Quail Hollow Club has been selected to host the Presidents Cup in 2021.

“We’re thrilled to add Quail Hollow Club to the growing list of exceptional venues to host The Presidents Cup,” PGA Tour Commissioner Tim Finchem said in a statement.  “Charlotte is a major hub of business in the Southeastern United States with a growing economy and broad base of sports fans, and The Presidents Cup matches perfectly as we look to bring it to exciting, emerging markets and allow a new fan base to experience the competition, pageantry and international goodwill that the event represents.

“Quail Hollow Club has been a player favorite since the PGA Tour returned there in 2003, and we’re confident players, fans and sponsors from around the world will find Charlotte, the Carolinas and the course itself a remarkable setting for The Presidents Cup.

“Being chosen by the PGA Tour to host The Presidents Cup 2021 is a dream come true,” Quail Hollow Club President Johnny Harris said. “Our membership is proud of all we’ve accomplished with the Wells Fargo Championship over the years, helping to impact the history of the sport here in the Carolinas, and the continual improvements we’ve made have allowed us to attract the best players in the world, the PGA Championship and now The Presidents Cup.  We look forward to doing everything we can to make this an unforgettable event for not only fans from Charlotte and the Carolinas, but those who embrace The Presidents Cup from around the world.”

The Presidents Cup is going to Incheon, South Korea, in October, and then Liberty National in New Jersey in 2017.