Put It On The Calendar: This Is The Week Where Tiger Woods Turned The Corner 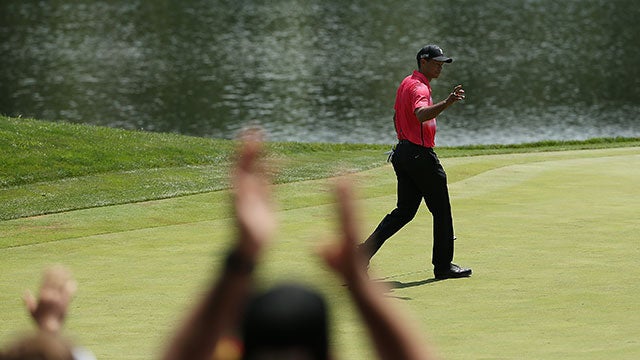 Tiger Woods reacts to a birdie on the ninth green during the final round of the Quicken Loans National at the Robert Trent Jones Golf Club on August 2, 2015 in Gainesville, Virginia.
Getty Images

Mark the calendar. This week at the Quicken Loans National was the week that Tiger Woods turned the corner.

I’m not predicting a win at the PGA Championship or a win at the Wyndham Championship, should he decide to play it in an attempt to qualify for the FedEx Cup playoffs, but Tiger’s game is coming back together.

Tiger knows it. He’s been saying it, but no one’s been listening because he’s been saying it for so long without results. Now he’s got something to show for his work with instructor Chris Como.

“Looking at the whole week in general, I felt like I made some big strides,” Woods said after his closing 68 Sunday at Robert Trent Jones Golf Club. “It was kind of a mixed bag as far as results, but the fact I had total control of the golf ball was nice.”

For once, we can agree that he’s telling it like it is instead of telling it like he wishes it was, so we will quit bugging him. When Tiger says it was nice because he had “total control of the golf ball,” well, if that doesn’t send a little chill down your back then you weren’t around 15 years ago when he gave new meaning to that phrase.

You may also like Tiger Woods Hits a Fan, Makes Birdie

Tiger’s game is on the rebound. How high will he bounce back, how good can he be again? That’s a million-dollar question, literally (or many millions), that no one can answer with Tiger at age 39 after knee and back surgeries. But his performance this week showed that he is, indeed, capable of playing well enough and contending and at least giving himself chances to win.

“Even though I struggled as bad as I did, one thing has been missing,” Woods said. “I’ve been trying to explain… trying to make an up-and-down here and there, scramble and turn an awful round into a scoring round. The first seven holes Saturday I was sucking all over the place and struggling for pars. I had that shot at the eighth to turn my whole round around and get it in the right direction. I didn’t do it. But today I did, which was nice.”

Really, this was the first encouraging sign since, well, who can even remember the last encouraging sign? Those five wins in 2013 that Tiger keeps referencing like they were yesterday, I suppose. Two years is an eternity in golf, but if that’s what he needs to hang on to keep his confidence and/or sanity, I’ll give him that.

The Quicken Loans National was a week that Tiger needed badly. It would’ve been better if he hadn’t totally tanked in Saturday’s third round, then he might have been in the mix Sunday. Then again, it may have been a blessing in disguise as it delivered a reminder that he’s not there yet—but, and this is the big news, he appears to be on the right track again.

Seeing is believing. Tiger played well in Thursday’s first round after he finished chopping up the first four holes. He played very well in Friday’s second round, missing maybe only two shots, and he even had a familiar electrifying moment near the end of the round when he poured in a 35-footer for birdie.

Saturday was just plain awful from start to finish, and that included Tiger’s warmup sessions on the range, where he said he hit it poorly.

Sunday was a wonderful big tease. Here was the Tiger of old again, wearing a flaming neon red shirt, firing out of the gates like he was intent on winning. He was five under par through the first ten holes and then… pffft.

He missed a short putt at 11, a real rally-killer. He hit a bad drive at 12 and while he almost salvaged a miracle par, it was a bogey and the exclamation point on the killed rally. At the 14th, his shot spun back off the green into the water.

Five birdies through ten holes, three bogeys on the next four.

If you’re a Tiger hater, you’re going to say that just proves he can’t get it back, he can’t keep it going under pressure on Sunday.

Closer to what? That’s what we don’t know. His putting stroke was there. His short-game shots were there. If you missed the flop shot he played from a downhill lie in the rough by the grandstand at the 18th hole in the third round, you missed a golf shot. Picture the handful of heroic flop shots you’ve seen him at at the Memorial Tournament over the years at Nos. 14 and 16 and this one was every bit as good.

Tiger was never going to forget how to hit his irons. He was the Ben Hogan of his era as a shotmaker at his best and he’s always been able to live off those clubs. The driver? That’s still an issue, of course, as it has been for the last decade. He won a lot of majors with Hank Haney, though, when his driver was a liability instead of the weapon it was once at the turn of the century. So it’s not necessarily a stopper but it still needs to be addressed.

The tease of Tiger’s closing 68 is that it would really be fun to see what he could do with three or four more tournament starts this year, especially if he could have played his way into the Bridgestone Invitational next week at Firestone Country Club where, oh yeah, he’s won eight times.

Odds are the PGA Championship at Whistling Straits will be his last PGA Tour appearance of the season. The Straits is a big, sprawling ballpark, one that ought to suit him like it suited big hitters Bubba Watson, Dustin Johnson and Martin Kaymer in the last major played there.

A victory there, which may seem like a fantasy, would reignite golf. Tiger would be back atop the game—not in the rankings but who cares about those? The media would breathless resume the Countdown to Jack’s 18 Majors as if Tiger never missed a beat. And Rory McIlroy and Jordan Spieth, for all they’ve done, would be back on the undercard.

It’s a pipe dream, sure, but one rule to live by in the Tiger Woods Era has been never to bet against him or count him out. What I saw this week was a Tiger with enough game to get into contention at the PGA. Winning? I’m not sure he’s ready to do that yet but… The best thing I saw Tiger do this week was smile and have fun and seem more relaxed. Tuesday, maybe he was just tired from a sweltering practice round and some tournament host duties and joining Rickie Fowler and some wounded veterans for a hole-in-one contest that really entertained the fans, but he seemed weary or maybe uncomfortable about what was to come.

Once he got back in the groove and started putting up birdies and making putts, he got a little swagger back and seemed to relax.

Near the end of that awful third round, he stepped up on the par-3 16th hole. He’d been jerking everything left most of the day, and he’d already torpedoed any realistic chance of getting in contention for the week. Plus, this was the hole that offered a $1 million prize to a lucky fan if any player made a hole-in-one. Woods dropped one straight at the flagstick. It landed right by the cup and just checked up right there, maybe three inches from the hole.

After all the agony of a miserable round, Woods picked up his tee, flashed a big smile and said to no one in particular, “That was close.”

So is Tiger. Maybe even closer than you think… if we’re lucky.