There has not been a shortage of controversy at the 2017 U.S. Women’s Open given that it’s being held at President Donald Trump’s Trump National Golf Club in Bedminster, N.J.

The president attended the tournament on Saturday, but while he was watching the best golfers on the LPGA compete on the course, just a few miles away protesters clashed over the event. Regular protests have been held throughout the week near Clarence Dillon Public Library located about three miles from the tournament. According to NJ.com, protesters there “decried the decision by the Ladies Professional Golf Association and the U.S. Golf Association to stage the showcase event at the president’s golf club in light of his past comments and behavior toward women.” 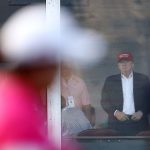 You may also like With Donald Trump looking on, Shanshan Feng leads U.S. Women’s Open

On Saturday those demonstrators were met by up to 50 supporters of President Trump, and at times the heated debate got physical.

On Sunday during the final round, some protesters found a way into the event itself as seen in these Twitter photos:

Breaking: Protesters get inside Trump National at US Women’s Open about an hour ago. Photo credit: @BergenBrennan pic.twitter.com/iXpKkPAjXQ

Though debate and controversy has swirled around the event all week, the USGA and the competitors have attempted to focus their attention on the golf.