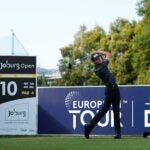 Bryson DeChambeau, at 337.8 yards, leads the PGA Tour this season in average driving distance. At last week’s Masters, DeChambeau also led the field, with an average of 324.4 yards. On the European Tour this season, Wilco Nienaber is best, at 336.89 yards per pop.

On the 597-yard, par-5 4th hole at South Africa’s Randpark Golf Club on Thursday, Nienaber’s drive beat his average. It beat DeChambeau’s, too. After one swing and a few seconds of roll during the first round of the European Tour’s Joburg Open, and before a quick smile, Nienaber’s ball ended up 439 yards away from its white tee.

“Oh my goodness,” an announcer said on the broadcast as the ball landed.

“That is borderline obscene,” the announcer said as the ball came to a rest.

“On 4, I had a decent drive,” Nienaber, a 20-year-old South African, said after his round, where he shot an eight-under 63 to sit in a tie for the lead.

He’s as modest as he is mammoth.

Had it not rolled into the left rough toward the end of its journey, his drive may have broken Nicolas Colsaerts’ European Tour record, a 447-yarder in 2014. The longest drive on the PGA Tour since 2004, as far back as the Tour shows on its website, is a 476-yarder by Davis Love III in 2004. According to various reports, the longest drive ever on the PGA Tour was the 787-yarder hit by Carl Cooper at the 1992 Texas Open, which, as you probably guessed, was aided by a roll on a concrete cart path.

As Nienaber’s average would suggest, he’s consistent, too. To that point, before the Joburg Open, GolfTV challenged Nienaber to see whether he could hit a combined 1,000 yards on three straight drives. He went 356, 355 and 340.7 for 1,051.7 yards.

“It’s a fancy to watch playing alongside,” an announcer said on the first-round broadcast.

“It’s a joy to watch because that’s what every golfer ever wanted to do,” another announcer said.