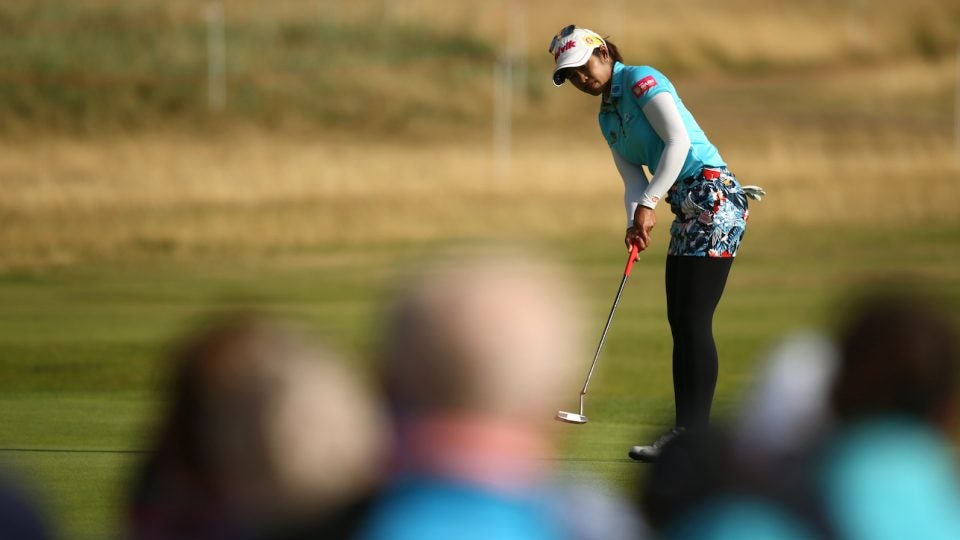 Pornanong Phatlum putts on the 14th green during the third round of the Ricoh Women's British Open.
Getty Images

LYTHAM ST. ANNES, England — Pornanong Phatlum made the Royal Lytham course sing for her again as she held on to her overnight one-shot lead of the Women’s British Open after the third round on Saturday.

Pornanong has been singing Thai songs in her head to calm herself on a links course she admits to struggling on. Though any struggling hasn’t been apparent, yet.

She birdied the third, sixth, eighth, and 11th holes, and dropped her first shot of the major on the par-3 12th, a bogey. It added up to a solid 3-under-par 69 and the prospect of a first win on the LPGA Tour, let alone a first major title.

“Singing in my head makes me come down more, not get too nervous,” Pornanong said.

She was at 13 under overall, one stroke ahead of playing partner Georgina Hall of England, whose scrambling through an erratic round kept her in contention also for a first major title. She birdied three of the last four holes to join Pornanong in the final group on Sunday.

Ryu So-yeon was third at 11 under, one shot behind Hall after climbing the leaderboard with a run of six birdies from the fifth to the 12th.

The South Korean, who has three top-10 British Open finishes, said: “Winning this tournament has always been my goal for the year. I’m in a pretty good position.”

Two-time major champion Park Sung-hyun (69) was a further shot back with Mamiko Higa (71) and Minjee Lee (71).

Higa is aiming to become the first female Japanese golfer to win a major title since 1977.

The leaders are also chasing history.

Pornanong is trying to become the second Thai female to win a major championship after Ariya Jutanugarn in 2016. Hall would be the first Englishwomen to win the Open in 14 years.

While Pornanong will be singing to herself in the final round, Hall will be counting on experience. She was in the final group in the Open last year, and finished in a tie for third.

“It was great to get so much support, I haven’t really had that before because I play in America quite a bit,” Hall said. “There were so many people behind me that I feel that was the reason I had good shots.”