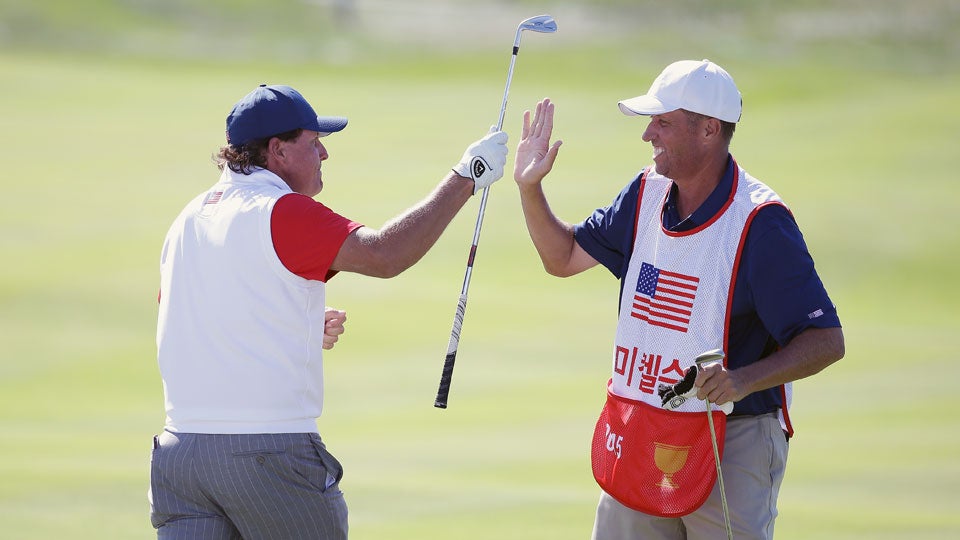 Phil Mickelson celebrates with his caddie Jim Mackay after holing a bunker shot on the 12th hole on Friday.
Getty Images

Phil Mickelson’s ball switch gaffe at the Presidents Cup Friday was not the end of the world.

It’s the Presidents Cup, not the Ryder Cup. And a lot of golf observers might tell you that the best thing that could happen to the Presidents Cup would be for the International team to finally win one and make this match competitive again.

Phil would not be one of those people.

What really happened here? Phil’s error was inexcusable. There is no way around that. He joked to U.S. captain Jay Haas about it being “a rookie mistake.” Ha ha. This is Phil’s 11th President Cup, and he has played in 10 Ryder Cups.

How can he not know the ball rule? This makes less sense than his buddy Dustin Johnson’s Bunkergate at Whistling Straits in that ill-fated 2010 PGA Championship. 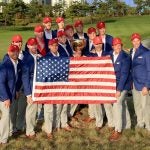 Give Phil bonus points for not trying to slack off the blame or dismiss the importance of what he did wrong. He claimed full responsibility for this bonehead move.

What was he doing with two different kinds of Callaway balls in his bag? He was Phil being Phil, trying to outsmart his opponents. He said he switched to a firmer ball on the 7th hole — to gain an advantage on a longer hole — and thus began The Phil Phlap or Phil-apalooza or LeftyGate or whatever you want to call this blunder.

So swapping out balls wasn’t an accident, it was a plan. The one-ball rule is a bedrock of tournament golf. It’s standard operating procedure. The only time that rule waffles is in foursomes play in team events, where two players use one ball to play out a hole, but otherwise, it’s a strict code. (Mickelson noted that the PGA Championship and Ryder Cup don’t enforce the one-ball rule. He’s half right about the Ryder Cup; when the matches are held in Europe, the one-ball rule is in play.)

The fact that Phil came up with a plan that goes against a long-standing rule of golf without checking it out or asking someone first, that’s incredulous. And that’s Phil.

Even he admitted that it was a huge goof.

He’s not a rookie; he’s the veteran voice of reason on this team. He didn’t earn his way into the lineup; he was a wild-card selection and a somewhat curious one at that. J.B. Holmes, Brooks Koepka and Brandt Snedeker were among the players who seemed just as, if not more, worthy as potential picks. And then Phil commits a massive rules blunder.

Phil likes to be, as Jack McCallum wrote in a classic Sports Illustrated feature, “the smartest kid in the room.” Sometimes it works. Like when he put two drivers in the bag and won a Masters.

Sometimes it doesn’t. Like when he changed equipment companies and all the clubs in his bag just before the 2004 Ryder Cup and his Titanic-like pairing with Tiger Woods at Oakland Hills. Whoops. Or when he tried to win the U.S. Open at Torrey Pines with no drivers in the bag. Whoops again.

Adding to the confusion was that the rules officials made a huge blunder, too. Mickelson was told he was disqualified on the hole where he switched balls and thus sat out as his partner Zach Johnson played on alone. That was wrong. Phil could have and should have finished the hole, which the Americans lost.

And then there was the one-hole penalty for violating the one-ball rule, so for the first time anyone can remember, a duo lost two holes on one hole. That might be the oddity of the decade.

Mickelson said that he can’t remember anything like this ball-switch thing happening before in an event like this. Seriously? Phil is a student of the game — hell, he’s a student of everything in the universe.

He certainly hasn’t forgotten the in-your-face Ryder Cup drama of the 1991 War By the Shore at Kiawah Island. That’s where Paul Azinger and Chip Beck squared off with Seve Ballesteros and Jose Maria Olazabal. On the 10th hole, Ballesteros called out Azinger for having switched to a different ball (a lower compression model of the same brand) on a par 3 a few holes earlier. It was a foursomes match and there was a strict one-ball rule in effect.

The TV cameras caught it all and a flummoxed Azinger was heard saying, “We aren’t trying to cheat,” and Seve cut him off by saying heatedly but diplomatically that while he wasn’t accusing them of cheating, “There’s a difference between cheating and breaking the rules.”

There was more backstory to that episode, as the Spaniards had gotten away with two rules violations on the front nine but the upshot was, the sensitive Beck and Azinger were so thrown off by the rules call-out that the Spaniards crushed them on the back nine and won the match. Phil knows this story as well as anyone else and to claim a ball mix-up has never come up before was an act of convenience.

Anyway, let’s get back to Phil and why he was really picked to be a part of this team.

He was duly embarrassed about his error, but he wasn’t conceding anything. He and Johnson halved the match with Adam Scott and Jason Day.

That prompted this line from Phil: “I feel like we spotted the Internationals’ best team two holes and they still couldn’t beat us. Just saying.”

It’s the kind of mildly defiant line that might fire up the Internationals, but it’s definitely the kind of line that will fire up Phil’s teammates. For all the ribbing that Phil takes about being pollyannish and phonily optimistic, well, it’s not phony, in my opinion. That’s the real Phil. If it’s an act, it’s an act he’s been pulling off for a couple of decades.

He’s a believer, especially in himself. He is confident and optimistic and, without overstating the case, a positive force, no matter what. And those positive vibes wash over everyone in the team room.

That’s why, since there was no clear-cut and obvious 12th player to add to this team, Haas chose Phil. He’s got the experience (well, except about ball rules, apparently), and he’s an important influence on the team.

As for his line about spotting Day and Scott two holes?

At least he got one thing right Thursday.