Who is the main man behind the U.S. Ryder Cup team? Ted Bishop says it's Phil Mickelson.
Fred Vuich / SI

Davis Love III may be the Ryder Cup captain, but Phil Mickelson is making all the moves.

That’s what ex-PGA of America president Ted Bishop writes in this week’s issue of SI Golf Plus Digital.

Mickelson was vocal about how dissatisfied he was with 2014 U.S. Ryder Cup captain Tom Watson after the Americans loss to the Europeans at Gleneagles in Scotland.

At the losing team press conference, Mickelson criticized Watson and the PGA of America, and he praised former Ryder Cup captain Paul Azinger’s pod system. Azinger was the U.S. captain in 2008, the only time the Americans have won the Ryder Cup this century.

Bishop, however, said Mickelson wasn’t completely happy with Azinger, either.

“Phil has told me flatly that he loved Azinger’s system, but he was not a fan of his leadership style,” Bishop said. “I’ve had my own experiences with Azinger, so I understood where Phil was coming from. Paul is a unique character — he has strong opinions and can sometimes be abrasive.”

After the Ryder Cup defeat, the U.S. created a task force — dedicated to righting the Americans Ryder Cup woes — which included Mickelson, Love, Tiger Woods and others. The task force selected Davis Love III as captain, a decision announced in February.

Bishop said that Mickelson “controlled the tenor of the task-force meetings” and added that Lefty took a shot at Watson during the official announcement as Love as captain, saying “Davis will put us in a position to succeed rather than create obstacles to overcome.” 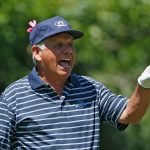 You may also like Lee Trevino: Davis Love Was Right Ryder Pick and Phil Mickelson Should Be Quiet

“I can’t help but think that Phil’s taking charge of the U.S. Ryder Cup process might represent the first time in years that he isn’t living in Tiger’s shadow,” Bishop said.