Phil Mickelson Is Flashing His Old Form — Good and Bad 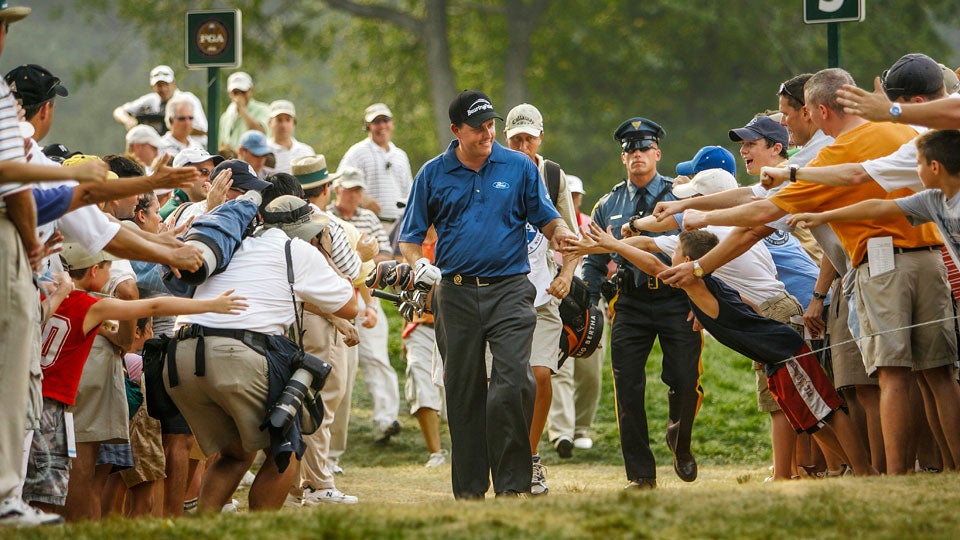 Phil Mickelson has won the Phoenix Open twice, most recently in 2013.
Getty Images

Month No. 1 on the PGA Tour has invited questions about bounce–backs (Rory McIlroy) and burnout (Jordan Spieth). But one question looms largest as we pause amid the Phil Swing — last week’s Farmers Insurance Open, outside San Diego, and this week’s Waste Management Phoenix Open — during which the Tour visits Mickelson hometowns 1 and 1A, respectively.

How much does Lefty have left?

Alas, Mickelson, who in the offseaon left Butch Harmon to retool his swing under relatively unheralded instructor Andrew Getson, showed in the second round he remains a work in progress. He hit a string of wayward wedge shots and bogeyed four of his last six holes for a 76 and missed the cut by two.

Twenty-somethings have been dominating the Tour for a few seasons now, but when it comes to making headlines, oldies such as Phil and Tiger Woods can still bring it. As you may have heard, Mickelson’s MC made more noise than just about anything else that happened at the Farmers. More, that is, than just about everything but the storm that rolled in on Sunday, causing three weather delays that forced a Monday finish, at the end of which Brandt Snedeker had prevailed.

First came Mickelson’s pre-tournament press conference, in which he ripped California’s namby-pamby Fair Political Practices Commission for deciding Mickelson couldn’t submit a bid to redesign the North course at Torrey Pines because he had discussions earlier with city planners.

Then a TV wag asked him about being an inspiration to 17-year-old Australian Ryan Ruffels, among other young players. Already in a feisty mood, Phil laid into Ruffels for blabbing to a newspaper reporter about getting into Mickelson’s pocket in a December match at Torrey Pines.

“He’s a very nice person,” Mickelson began, but Ruffels was young, he added, and had some things to learn on Tour. “You don’t discuss specifics of what you play for,” Mickelson said, “and you certainly don’t embellish and create a false amount just for your own benefit.”

Now, as Mickelson heads to TPC Scottsdale, where he won in 1996, 2005 and 2013, Phil-watchers are wondering whether his clubs also might begin to make some news, and in so doing break a silence that has stretched more than two years. Early signs are positive. Coming off a T-3 at the CareerBuilder Challenge, Mickelson carded six birdies at Torrey South. He reached the green with a 285-yard 3-wood at the par-5 13th hole and two-putted for birdie. He hit a wedge to within a few feet at the par-4 14th. Then he hugged wife Amy in the gallery for luck en route to the 15th hole and proceeded to birdie that one too.

Phil was back! So was the excitement, and the dreaming began in earnest. If Mickelson could tie for second at the Masters without being in total command, as he did last year, then imagine what he could do if he knows where he’s hitting the ball? Then came Friday’s buzzkill.

Mickelson had no explanation, but here’s one: He is still prone to relapses during which stray tee shots lead to spectacular recovery shots until, of course, they lead to disaster. Old Phil isn’t going away quietly. The implosion of his second round at Torrey North, which he started on the back nine, was classic Mickelson. He drove into some gnarly rough left of the 12th hole, choked up on a hybrid, and squirted his second shot to within a few feet of the pin. He made the birdie putt.

He drove into the fairway bunker at the par-5 13th — “What are you doing!?” he yelled at himself — but still reached the green with an outrageous second shot and barely missed his eagle try. He tapped in for birdie.

The round didn’t truly begin to get away from him until he three-putted for bogey at the par-3 17th, which seemed to inform his decision making thereafter. After losing his drive right at the par-5 18th, Mickelson tried to reach the green in two, but his shot came to rest under a wrought-iron fence.

You’ve perhaps seen what came next: Mickelson stabbing at his ball, the club clanging against the fence, and the ball shooting into a greenside bunker. He three-putted for a 7. “I think I tried to force the issue a little bit,” he admitted.

“I still felt like the swing was pretty easy,” he said. “I hit a lot of great drives around my second nine, and I don’t really know what to say, because it doesn’t — the score’s not how I feel like I’m starting to play.”

We’ve heard that a lot from Phil, just as we once heard it from Tiger. Should we believe him? Given Mickelson’s appeal, and with the party-all-the-time Waste Management Phoenix Open on tap, it’s more fun if we do.