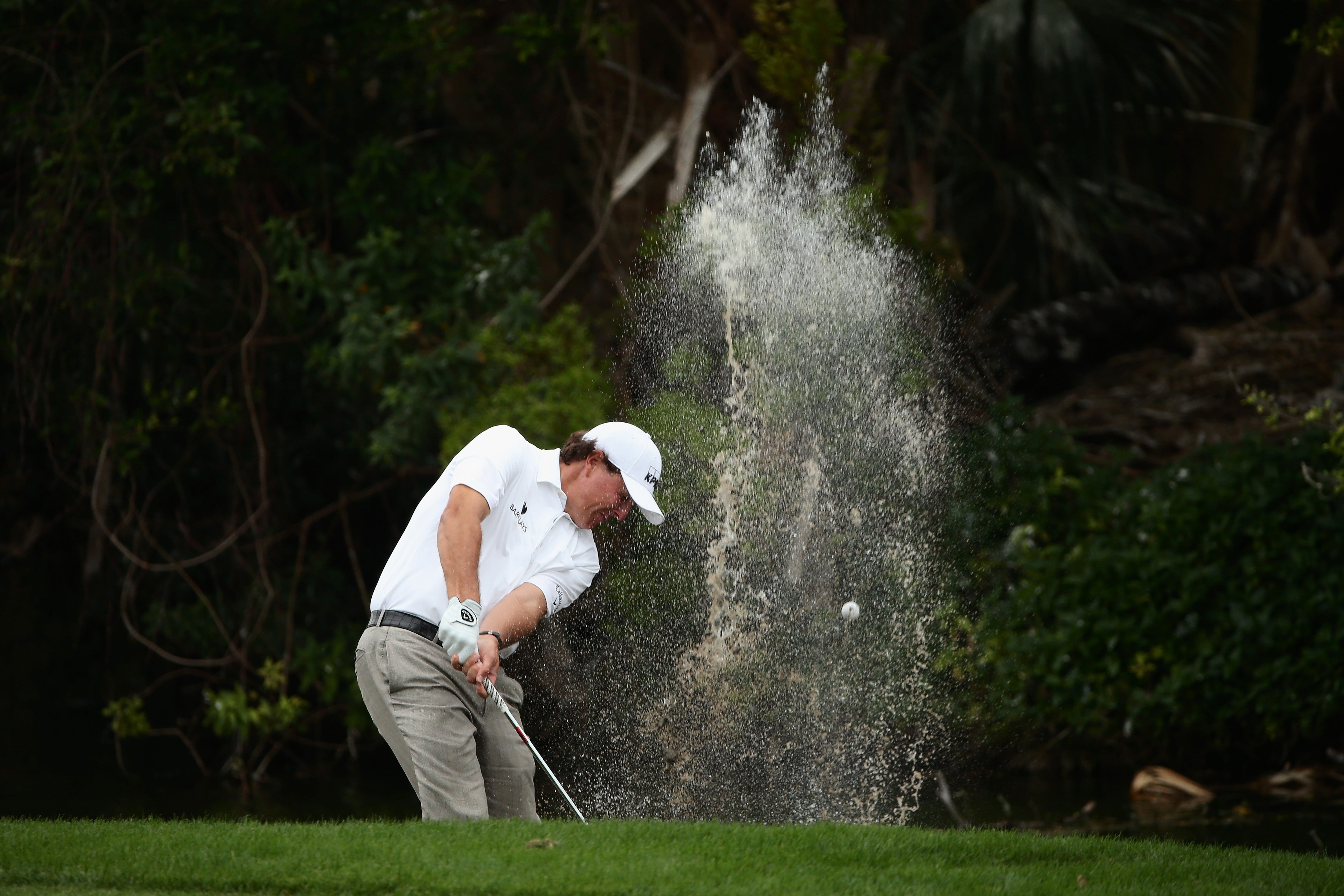 Phil Mickelson plays his shot on the sixth hole out of the water Thursday during the first round of the Honda Classic at PGA National.
Getty Images

Thursday, those two irresistible forces and immovable objects met. Call it a draw. The swirling winds battered the Honda Classic field and kept a lid on scoring although journey player Jim Herman managed to carve out a 5-under-par 65 in the morning half of the field.

Mickelson, coming off an awful putting performance at the Farmers Insurance Open where he missed the cut, remained his usual Mr. Optimism self to the usual almost Pollyanna-ish fault. That’s just Phil being Phil. He’s a believer.

LEADERBOARD: First Round Scores From The Hondal Classic

So the fact that Mickelson shot 71, one over par, was not a bad thing. Especially not when you factored in that he had three penalty strokes because he hit three shots that came to rest in water hazards. Pollyanna-ish? Nah, there’s no shaking Phil.

“I just really enjoy the challenge of these windy conditions,” Mickelson said. Maybe that’s not what he would’ve said the moment after his tee shot splashed at No. 1, his 11th hole. After a drop, he hit an approach shot into a greenside bunker, then made a sweet up-and-down for bogey, holing a 10-foot putt.

“It was a fun day,” Mickelson said.

Maybe that’s not what he would’ve said the moment after his shot at the 5th hole found the water left of the green but not to worry, he made another nice up-and-down to save bogey.

“The greens were beautiful,” Mickelson said.

That’s probably not what he was thinking at the par-4 6th, where he found the water off the tee to the left again, dropped and hit over the back of the green, and made another clutch bogey save. Mickelson is rarely not in his don’t-worry-I’ve-almost-got-this mode. The man can take a hit and bounce back. Six U.S. Open runner-up finishes show that. A bad week of putting at Torrey Pines? Rest assured, he’s had worse putting performances. Thursday in the wind, he rolled it pretty well.

“I made a couple of good four-footers early on and it was fine,” Mickelson said. “I hit every putt on line. It felt good. Putting is not really the issue I’m worried about even though it was the weakness earlier in the year. It was fine today and I don’t expect it to be an issue.”

Mickelson made his message clear: Don’t worry about me, I’m fine. He needed 27 putts, not bad on a windy day, and he successfully got up and down all four times he found greenside bunkers.

Three penalty strokes wasn’t unusual on a trying day like this. Mickelson really is fine, other than the fact that he wasn’t immediately in contention after the opening round.

“On a couple of tee shots, you’re really under pressure to hit the fairway in a strong wind,” said former British Open champion Padraig Harrington, who shot 67. “You just have to man up and hit the shots. We are going to hit a few bad ones but you’ve just got to stand there and try to hit the right shot at the right time and accept your fate.”

Thursday morning’s wind was nothing more than a tiddling little Irish breeze, wasn’t it? “If I had come from Ireland, I probably would be thinking this is a nice day,” said Harrington, who is Irish. “But having played the last four weeks over here, even I was struggling and questioning and doubting myself out there. I kept telling myself, it suits me more than most guys. But I did find it difficult.”

This was the kind of day strange things happen. Brendan Steele, who shot 66, found that out early.

Steele was one under through four holes but hit his drive in the water at the 14th hole, took a drop and hit his third shot in the water. He dropped again, this time near the green, and now he’s looking at a seriously big number. Instead, he holed a 35-yard pitch to salvage a big, big bogey. It was his biggest mistake of the day and at the same time, his biggest highlight.

That’s the kind of day it was Thursday. Fun, according to Mickelson.

Will Phil Mickelson have a bounce-back seaon in 2015? Join the conversation the comments section below.