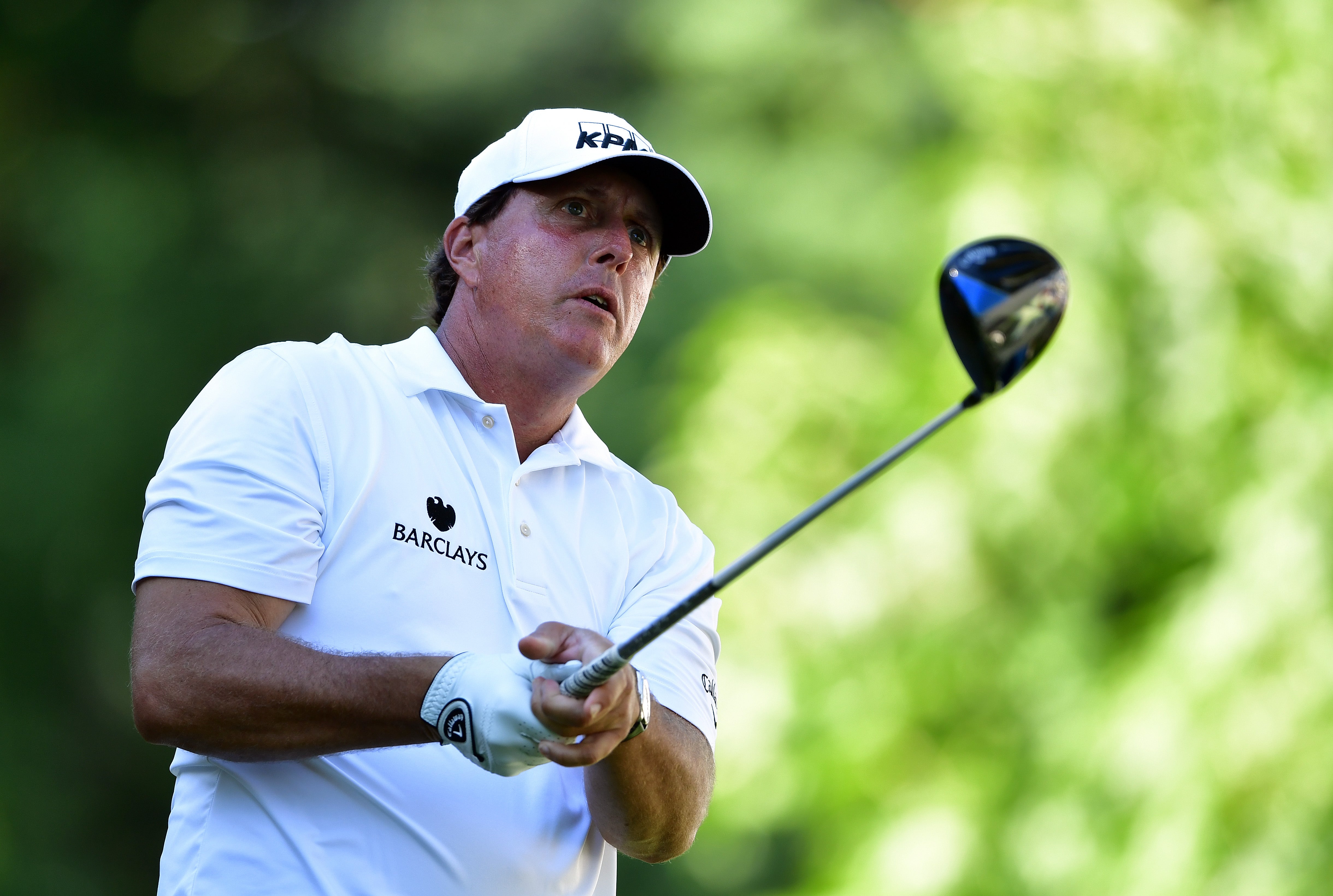 Just days after coming up short at the British Open, Phil Mickelson will get another major opportunity at Baltusrol Golf Club.
Getty Images // Stuart Franklin

SPRINGFIELD, N.J. — Being Phil Mickelson must be exhausting. He’s 46, and a father of three. He designs golf courses and invests in businesses and sinks sweat equity (and the green kind) into altruistic projects such as the Mickelson ExxonMobil Teachers Academy, just 18 miles east of here, at Liberty Science Center. He has a case of potentially debilitating psoriatic arthritis that he medicates daily and rarely makes a peep about. He’s had both the feds and reporters peppering him with questions about his ties to an unsavory insider-trading case involving the gambler Billy Walters.

And then there’s his day job. Earlier this month Mickelson crossed the Atlantic, where he kicked off a two-tourney Scottish swing with a gloomy 76 at the Scottish Open at lovely Castle Stuart (Phil’s toast!) before closing with a dazzling 66 (Phil’s back!). A week later, after three fabulous rounds on the rumpled links of Royal Troon, Mickelson engaged in a riveting but ultimately exasperating (for Phil) dogfight with Henrik the Great. Mickelson played his best but his best wasn’t good enough. That can wear a man down. (“I’ll look back over time,” Mickelson said Tuesday of his duel in Troon, “and my disappointment will probably increase.”)

A Gulfstream flight here, a Gulfstream flight there, and now here we are just nine days later, on the cusp of yet another major, on a course where Mickelson raised the hefty Wanamaker Trophy back in 2005. Play your tiny violins, if you must, but with the mercury hovering in the lows 90s on Tuesday and just a hint of breeze, it was way too hot to watch golf let alone play golf, let alone play golf in the dashing (wool?) slacks Mickelson donned during his practice round-cum-money match with Jordan Spieth, Justin Thomas and Colt Knost. But there was Phil, flashing toothy grins and spinning his magic wedges on the rough-choked Tillie classic that sits here at the base of Baltusrol Mountain. “I like the heat,” Phil revealed later. It loosens up his body, his muscles, his swing. “Ball goes farther. Ball goes straighter,” he said. “It’s a lot easier to play golf in the heat than it is in the cold and rain and wind.”

On the 18th green, after Thomas had holed a 20-footer of obvious financial consequence, Mickelson could only smile and shake his head. “You gotta be sh–ing me!” he chirped. Mickelson shook a few hands before giving Baltusrol head professional Doug Steffen a warm embrace. Steffen, who is on the verge of retirement after 20 years at the club, was among the small gallery that trailed Mickelson inside the ropes on Tuesday.

Then, under a broiling sun, it was time to feed the beast. Awaiting Mickelson to the left of 18th green was a hoard of screaming autograph-seekers. Kids, grandparents, flag-wielding dealers. Mickelson encounters mobs at every Tour stop, but few as large and rabid as this. Lefty does to New York-area golf fans what the Beatles did to Liverpool teens. Squeals, shrieks, so many shouts of, “We LOVE you Phil!”

Can you blame them? They’re only giving back to Mickelson what he has given to them: the heavyweight battle with Tiger at Bethpage in ’02, the heartbreak at Shinnecock in ’04, the redemption here at Balty in ’05, the countless times he has gone out of his way — at Plainfield, Ridgewood, Liberty National — to praise the local fans. They’re a 15th club in his bag. “It not only makes it fun to play but it also keeps my energy level up throughout the round when I have a tendency to make a mistake or two,” Mickelson said of his love affair with the galleries. “It helps me overcome some of those mistakes.”

Mickelson didn’t err much when he won here in ’05, and if his current form is any indication he’s unlikely to make many blunders this week. The key to success at Baltusrol? Driving and putting, Mickelson said. With two par-4s that play 500-plus yards and a par-5, the infamous 17th, that extends to 650, big hitters who find fairways will have an edge. Assuming, that is, they can manage the greens.

“Putting is a challenge here because the greens have a lot of contour, and they are not consistent contours. There’s a lot of little rolls and knolls,” Mickelson said. “You can see multiple lines and only one of them is correct, and it’s sometimes hard to see.”

What’s not hard to see is that Mickelson is still hungry for more majors. He has five, which puts him in the same class as the likes of Byron Nelson, Seve Ballesteros and Peter Thomson. One more and he’d join Lee Trevino and Nick Faldo. Two more and he’d join Arnie, Snead, Sarazen and Varden. The clock is ticking, but Mickelson doesn’t hear it.

“I don’t believe that there is a small window,” he said. “I think there’s a really big window of opportunity to add to my resumé, to continue to compete in big events, for the simple reason that the feel and sensitivity of hitting shots, the ability to play golf courses a certain way, to visualize, to make birdies, to pull shots off, that has not diminished.”

After meeting with the press Tuesday afternoon, Mickelson slipped out of a side door in the media center and into the sweltering heat. Sky Sports and ESPN’s Tom Rinaldi were waiting for him outside. Moments before ESPN started rolling, a look of panic briefly flashed across Rinaldi’s face. He wanted to confirm a fact but didn’t have access to his phone. Not missing a beat, Mickelson whipped out his phone to help with the search. His workday wasn’t done just yet.