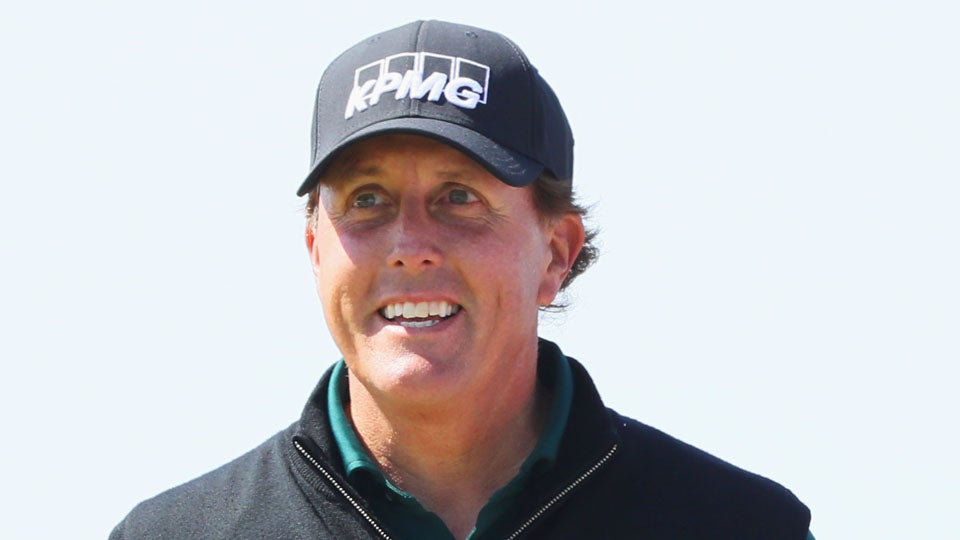 Phil Mickelson is off to a hot start at Royal Troon.
Getty Images

But that’s not all. The competition was in Gillette Stadium, home of the New England Patriots, and Mickelson won with a right-handed wedge. Remember, this is the guy known as “Lefty.”

Mickelson and his seven Ryder Cup teammates put on Patriots jerseys and hung out on the field on Wednesday, as he and the rest of the crew bonded off the course as they prepare for the first round of the Deutsche Bank Championship, just outside of Boston, on Friday. And, just for fun, a hole was set up 78 yards away on the field, and players took aim using captain Davis Love’s wedge.

Mickelson stuck his shot four feet away from the hole.

Lefty talked about the shot on Thursday, and he made sure his Ryder Cup teammates remembered who won.

“Honestly, it’s just not that hard to play golf right-handed,” Mickelson said, taking a light-hearted jab at his fellow U.S. Ryder Cuppers. “I think the real challenge and enjoyment I get is from trying to play the game left-handed.

And one more jab…

“I wouldn’t want them to feel bad,” he said. “As a guy who knows how sensitive these players can be, I didn’t want to overemphasize my victory last night. It didn’t go unnoticed, but I didn’t need to harp on it. I didn’t need to make a big deal of it. They’re just a little touchy about that kind of stuff.”

Jordan Spieth added: “(We) all feel really bad because he sure let us know about it.”

The #Patriots are on the road, but another team – @RyderCupUSA – hit the @GilletteStadium field tonight: pic.twitter.com/S6A94DQAzY