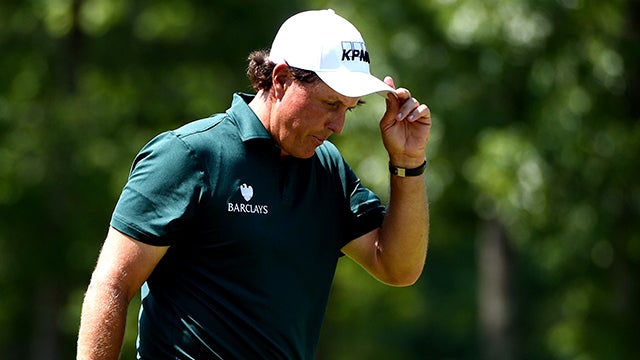 Phil Mickelson missed the cut at the Players Championship for the third year in a row on Friday.
Carlos M. Saavedra / SI

Phil Mickelson’s victory at The Players in 2007 seems like a long time ago. He missed the cut Friday for the third straight year, and as he made his way toward the finish found himself saying, “I can’t believe I’ve actually won here.”

“I’m not as discouraged as the scores out indicate, just for the simple reason that I made nine birdies,” Mickelson said after a 76. “I hit a lot of good shots. It’s just that when I hit bad ones, it led to huge scores.”

He tried to play a draw into the right pin on the 18th, and blocked it into the water. That led to a triple bogey. He got himself in a bad position short of the sixth green and made a double bogey.

Mickelson was playing for the first time since his runner-up finish in the Masters.

“I get a little rusty mentally when I take three weeks off and I come out not the sharpest,” he said. “I wasn’t too optimistic about going low yesterday, but I thought today I was going to get a good round going. Then I started out birdieing the first hole. I thought that I was going to be off and running, but it didn’t really work out that way.”

He made bogey on the next hole, the par-5 11th. And he was off and walking.