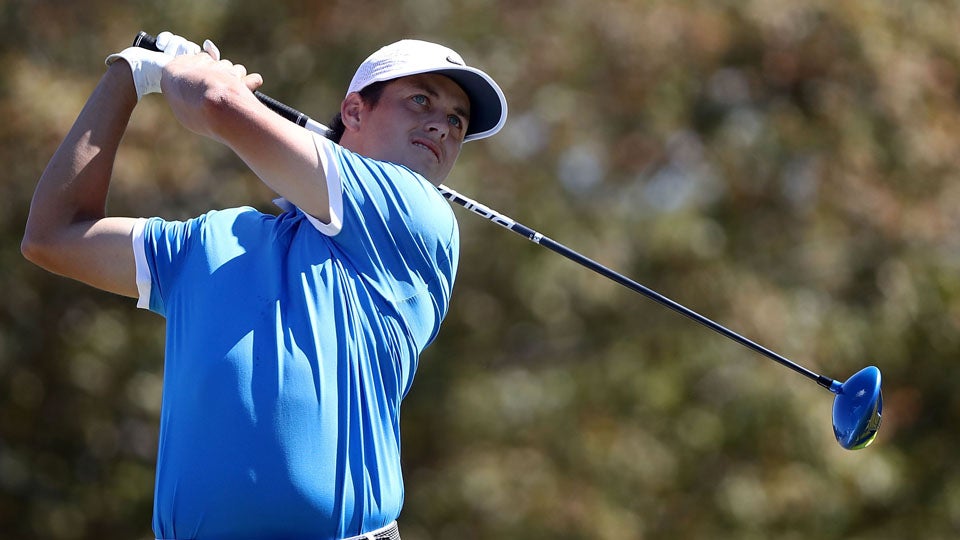 Cody Gribble plays his shot from the 5th tee during the final round of the Sanderson Farms Championship on Oct. 30, 2016, in Jackson, Mississippi. Gribble won by four.
Getty Images

JACKSON, Miss. (AP) — Cody Gribble and his caddie talked a ton during the final nine holes of his impressive run to a Sanderson Farms Championship victory. Very little was about golf.

They talked about Gribble’s Texas Longhorns and their big win in football over Baylor on Saturday. They talked about the Chicago Cubs and the World Series. They discussed their upcoming trip to Las Vegas.

Anything to keep Gribble’s mind off the incredible run he was making.

“I knew I was in a good spot and I knew I was playing well,” Gribble said. “It’s hard not to sit there and look at the scoreboard, look where you’re at and how you’re doing.”

The small talk worked. Gribble finished with a 7-under 65 – which included five birdies on a spectacular back nine – to turn a tight fight into a four-stroke victory and his PGA Tour title.

The 26-year-old rookie started the day a stroke behind playing partners Chris Kirk and Luke List.

Gribble looked as if he might have trouble just making the cut at the Country Club of Jackson after an opening 73. He bounced back with a 63 in the second round to jump into contention – one shy of the course record – and followed it up with a 67 on Saturday. On Sunday, Gribble started slowly, but picked up steam on an unseasonably hot day in Jackson where the temperature pushed 90 degrees. He made a short birdie putt on 11 and then hit a difficult downhill 18-foot putt for birdie on 13.

Kirk and List each shot 70 to tie for second with England’s Greg Owen (68).

“Cody played unbelievable,” List said. “He definitely deserved to win. I was happy to scramble around and get a couple under out of it.”

Kirk won the tournament in 2011, back when it was called the Viking Classic and played at nearby Annandale Golf Club. He was in contention again at the Country Club of Jackson after shooting a 65 in the third round, but nobody was able to keep up with Gribble’s torrid pace on Sunday.

“It was definitely impressive watching Cody play that back nine,” Kirk said. “I wish that I could have given him a little better run. I was just a little bit off, I guess.”

Gribble played in college at Texas and is the second member of the school’s 2012 national championship team to win a PGA Tour event. The other is Jordan Spieth.

Gribble obviously has a way to go to match the accomplishments of Spieth, who is among the world’s best players, but the Sanderson Farms win is certainly a good start. He earned $756,000, 300 FedExCup points and exempt status on tour through the 2018-19 season.

The four-stroke win was the second largest in tournament history, trailing Frank Conner’s five-stroke win in 1988.