PGA Comes Under Fire for Refusing to Move Up Tee Times 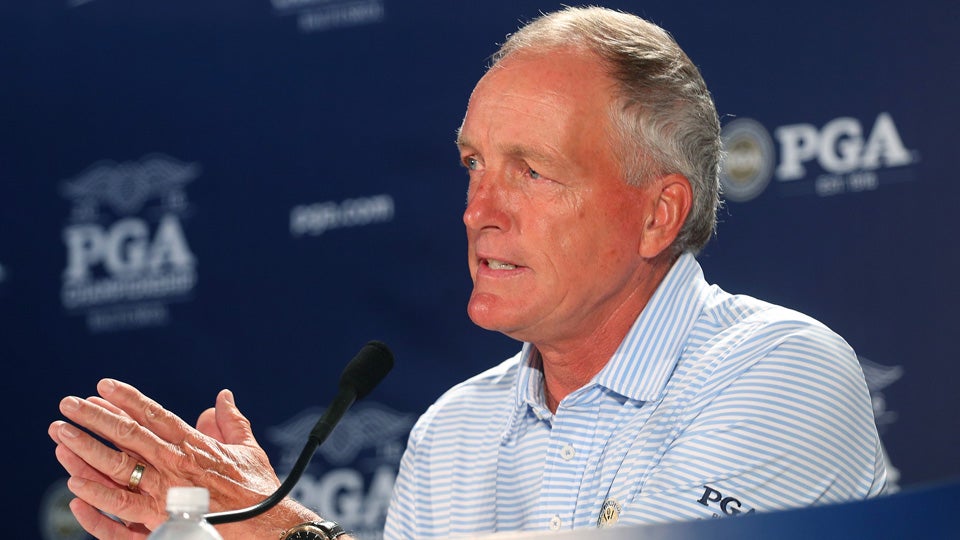 Kerry Haigh, the chief championships officer of the PGA of America, talks to the press after play was called on Saturday at Baltusrol.
Getty Images

SPRINGFIELD, N.J. – Thunderstorms have thrown the 98th PGA Championship at Baltusrol into disarray, and on Saturday night some critics in the press wondered aloud if it could have been prevented with some better planning.

Kerry Haigh, chief championships officer of the PGA of America, said the third-round forecast was largely the same as it was for the first and the second rounds Thursday and Friday, and as a result the organization did not use both tees to get everyone around the course Saturday morning and early afternoon before the horn blew at 2:14 p.m.

“It’s a major championship and we certainly try and look at starting from one tee whenever we can,” Haigh said in a press conference with reporters mediated by PR man Julius Mason. “Unfortunately the weather didn’t help us today. I think we have a similar forecast for tomorrow. Our hope is that those showers or storms hit elsewhere.”

Alas, he received many follow-up questions. One reporter suggested Haigh was on record saying he wasn’t opposed to two-tee starts, and asked for clarification. Yet another journalist asked why the PGA didn’t emulate the R&A at the 2014 British Open at Hoylake, when a two-tee start got players around the course just in the nick of time.

MORE: Round 3 Suspended Due to Weather, Calls for Busy Sunday

“Well, as I said earlier,” Haigh said, “and then for the third time, the forecast was very similar to the previous two days, and we were unfortunate that we got hit with them.”

The Hoylake questioner followed up: “But why take the chance when you can have one hundred percent—”