PGA Championship: Which Star Bounces Back in Round 2? 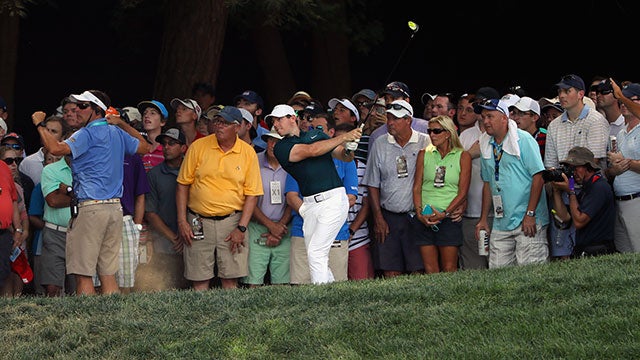 Rory McIlroy of Northern Ireland hits his second shot on the 18th hole as fans look on during the first round of the 2016 PGA Championship at Baltusrol Golf Club.
Getty Images

1. After one round, the leaderboard is lacking a little star power. What big-name is most likely to bounce back in a big way on Friday?

Peter Bukowski, associate editor, GOLF.com: I’m tempted to say Rory McIlroy because no one can get hot like he can, but I’m going with Phil Mickelson. Lefty looked great in practice rounds and just didn’t look like he had his swing dialed in today. He’s a veteran player who can make changes on the fly. I expect him to get his swing ironed out and play much better tomorrow in what promise to be soft conditions.

Marika Washchyshyn, multimedia editor, GOLF.com: For pool purposes, I hope it’s Dustin. But I’m going to go with Rory for the same reason Alan suggested. Rory in soft conditions can be a dangerous thing — watch out! Gary Van Sickle, senior writer, Sports Illustrated: Henrik Stenson shot 67 and looks like that is the worst score he can shoot. I see him bouncing back from 67 with something even lower.

Josh Berhow, staff producer, GOLF.com: Rory. Take away his horrific putting and he played pretty well. But 35 putts and an average length of putts made of about a measly two feet is unreal. He came back to the putting green Thursday night and was working with longtime coach Michael Bannon, and you could tell based on Rory’s body language that he was really searching for answers. I think he gets his putter back on Friday and goes on a run.

Joe Passov, senior editor, GOLF Magazine: Certainly Dustin and Rory are the obvious choices, though, boy, Rory seems to struggle with the flatstick a lot. Beyond that, I’ll pick Phil Mickelson. His 71 wasn’t bad at all, he knows he’s in it, he’s handy on poa-influenced greens and he’s won here before. The soft course will contain a few of his wayward drives. Look for him to go low Friday. Jessica Marksbury, digital editor, GOLF.com: I, too, am holding out hope for Rory. If he gets the putter going, he could get right back in mix tomorrow.

Shipnuck: Right, Jess. And *if* the Titanic had avoided the iceberg it would have been a successful trip.

Peter Madden, senior producer, GOLF.com: I just walked by the putting green on the way back to the media center. Rory is still out there working on his stroke. I’m not sure whether that’s a good thing or a bad thing.

Sean Steinemann, social media editor, GOLF.com: I’m going to go with Spieth. I think he’ll ride the momentum of two birdies in his final three holes to get into the mix heading into the weekend.

Jeff Ritter, digital development editor, GOLF.com: Is Jason Day eligible for this answer? He hit 17 of 18 greens in what was essentially his second practice round of the week. He’s only three back, and if he can have another ballstriking round like Thursday, he could be sitting on the lead tomorrow night.

Sean Zak, assistant editor, GOLF.com: Spieth seems to be the only star with any momentum, riding a pair of late birdies to get back to even on the day. Outside of a double bogey on the 7th, which played tough for the entire field, Spieth was solid. Watch for him to go out early and start chasing down Jimmy Walker.

Mark Godich, senior editor, Sports Illustrated: I’ll take Spieth. The driver is still a bit wayward, but he still hit 14 greens. The problem was that he made next to nothing. We know that won’t last for long.