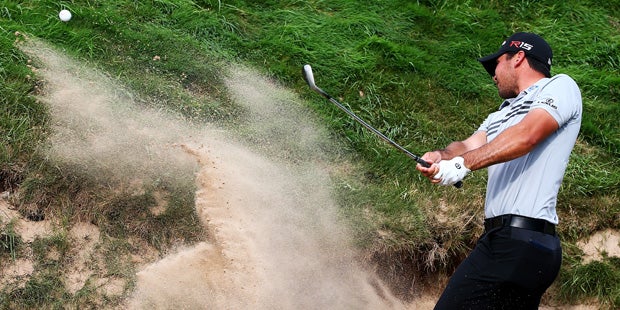 Jason Day blasts out of a bunker during the second round of the PGA Championship at Whistling Straits on Friday.
Getty Images

HAVEN, Wis. — It’s time. Jason Day knows it. We know it. He has proven to be a contender at Augusta National, the Old Course, Merion, Pinehurst and Oak Hill. Day’s rare combination of power, precision and determination make him a threat to win anytime, anywhere, but he is at his best in the more exacting conditions of the major championships. Nine top-10s in the last five years is proof that his game is ready. Day himself knows what is the real challenge. “The last bit of the puzzle is all up here,” he says, pointing at his noggin. “Having the belief and confidence that you can do the stuff that other guys do on Sundays. I mean, that’s really inside your head. And it’s just amazing how the more and more I stay out here over the years, the more it’s all about the head, rather than the whole game itself.” 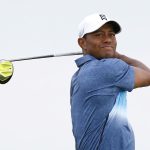 You may also like 2015 PGA Championship: Tiger Woods Misses Cut, Decision on Wyndham Up Next

Day, 27, is once again in position to realize his awesome potential. A nasty lightning storm stopped the second round of this PGA Championship prematurely; when play resumes at 7 a.m. local on Saturday, Day will face a birdie putt on the 15th hole to take sole possession of the lead. As it stands now, he is tied with fellow Aussie Matt Jones atop the leaderboard at 9-under, with Justin Rose trailing by a shot. Tied for third, at 7-under, are David Lingmerth, Harris English and Tony Finau, a titanium-denting rookie who has also impressed this year with his consistency and all-around game. (With the exception of Lingmerth, all of the above players must still complete their second round.) Lurking one more shot back is Jordan Spieth, who put a charge into this PGA by going out early on Friday and shooting a 67 to fly up the leaderboard. The highlight was what has rapidly become Spieth’s trademark, a high-degree-of-difficulty hole-out, in this case on the 18th hole. Spieth’s rapid ascent has placed a heavy burden on other young players who are struggling to breakthrough and none feels it more acutely than Day. “Unfortunately,” he says, “sometimes people make it look easier than others. Some people get there quicker than others. For me it’s more of a learning time right now. We’re humans. We’re not machines out there. It’s very easy to make poor choices and have bad swings every now and then. But we were so blessed with Tiger and Rory and Jordan, just recently, that winning looks so easy. And I’m not saying it’s difficult for me, but it’s something that I’m trying to learn and get better at.” 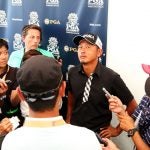 You may also like PGA Championship: Chasing 62, the History Behind the Coveted Number

The struggle is real for plenty of other players, too. Golf’s star-crossed kid, Dustin Johnson, was atop the leaderboard until three bogeys in four holes early in the back nine sent him skidding. Johnson is 31, a year younger than Tiger Woods was when he won his last major. The window can close faster than anyone imagines, even for the ultra-talented, which adds to the urgency for Day to capitalize on yet another golden opportunity. “I think the more times that I keep putting myself there, the more opportunities that I give myself, sooner or later it’s going to happen,” he says. “I know that.”

If Day slips up plenty of other players are primed to make a run at the Wannamaker trophy. Rose, the 2013 U.S. Open champ, is swinging the club beautifully – one of his eight (!) birdies during the second round came when he drove the green of the 334-yard par-4 6th hole – and looks exceedingly confident with the putter. Jones, 35, took last year’s Houston Open for his first PGA Tour victory and so far this week he has played nearly perfect golf, making only one bogey. Indeed, Whistling Straits has not been as fearsome as advertised. The big mover a day before moving day was a player known only to the most sleepless Golf Channel viewers: Hiroshi Iwata. Following an opening 77, Iwata tied the major championship scoring record with a 63, moving up a whopping 90 spots on the leaderboard; at -4, he’s in a tie for 15th place. Big George Coetzee also made a big move, with a 65 that propelled him up 59 places on the leaderboard, to a tie for 12th. Coetzee regularly plays money games against his fellow South Africans Louis Oosthuizen, Charl Scwartzel and Branden Grace, which can be an expensive proposition. “I’ve actually got to make some money to pay some bets this weekend,” he said. 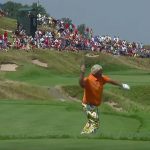 Both Iwata and Coetzee are fun characters to have around but neither has yet had his heart broken in a major championship, which seems to be a prerequisite to actually winning one. Day contented at this year’s U.S. Open despite a scary onset of vertigo, a massively impressive performance that led to a growth spurt. “I learned a lot about how far I could really push myself mentally and physically,” he says. “It’s just a matter of how much do you want it. And I really want it. I mean I’m willing to put my body on the line and stuff like that, just to get a taste of that greatness.”

A series of physical maladies has stunted Day’s growth as a player but he is finally of sound mind and body. His peers know how dangerous that makes him. “You feel like if he could have smooth sailing for a couple of years health-wise he’d be right up there with Jordan and Rory,” says Geoff Ogilvy. “He’d be a threat to win every week.”

Day’s most recent victory, in Canada, came a week after his near-miss at the British Open, where he had a putt on the final hole to join the playoff. Though the result was familiar, something shifted for Day during that pressure-packed final round in St. Andrews. “I felt different,” he says. “And I don’t know what changed, but I felt a lot more calm. Everything was kind of slow paced. Everything felt like a Thursday, rather than a Sunday of a major championship.”

He will have to carry that same equanimity into the weekend of this major championship. If he does, expect Day to arrive, at long last.