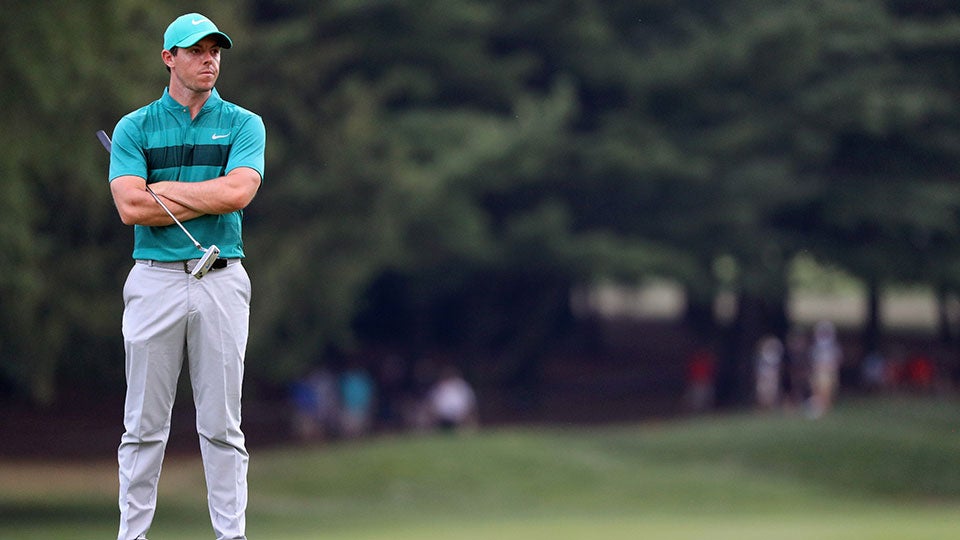 SPRINGFIELD, N.J. – Two years ago, Rory McIlroy was beaming from ear-to-ear on the 18th green at Valhalla Golf Club, hoisting the Wanamaker Trophy in the darkness as flashes from cameras lit up the scene. He was 25, the No. 1 player in the world and the owner of four major titles. All of the talk was about his quest to complete the career grand slam. Now fast-forward two years. With his missed cut at the 2016 PGA Championship, McIlroy has been a non-factor in the eight major championships since.

A sloppy bogey at the reachable par-5 18th hole dropped McIlroy to three over par, a shot over the cut line at Baltusrol, and sent the No. 4 player in the world home early at a major for the second time this year.

To say McIlroy is streaky is no revelation. He has said he would rather win three times and miss three cuts over the span of six events versus having six top 10s. But he has taken the streakiness to a new level of late: It now goes from hole to hole.

After a birdieless, four-over 74 on Thursday, McIlroy had work to do just to make the cut. He hit the first eight greens in regulation and made two birdies. He seemed to have found the bounce in his step.

After bogeys at the 9th and 13th holes and a birdie at the 11th, McIlroy stood on the 16th tee one shot over the cut line. He carved a towering long iron that settled six feet from the pin, but he shoved the putt, failing to even scare the hole. He bounced back by jarring a 33-footer for birdie on the par-5 17th.

Standing on the par-5 18th tee, McIlroy and playing partner Phil Mickelson were both two over, and the cut line was fluctuating between one and two over par. Mickelson reached the green in two and two-putted for birdie. With a mid-iron from middle of the fairway, McIlroy short-sided himself in heavy rough right of the green and needed three pitch shots to reach the green. He would bogey the easiest hole on the course, and a par-5 no less. (McIlroy leads the PGA Tour in par-5 scoring average this season.)

“Tee to green was good, but it was just pathetic when I got onto the green,” a disconsolate McIlroy said after his round. “I just need to figure out what to do on the greens. I need to have a long hard think about that.”

That’s been the story for most of the season.

At the Masters, McIlroy was a shot out of the lead and in the final pairing with Jordan Spieth on Saturday. McIlroy played tentatively in the gusting winds, while Spieth made clutch putt after clutch putt. McIlroy spent five hours hitting tee shots 20 yards past Spieth but failed to record a birdie, while Spieth nabbed five.

“I turned around after 15 and said how the hell is he two under par today?” McIlroy said after that round. “And as much as it could be annoying to his competitors, it’s very, very impressive. And as much as it does dishearten you seeing those putts lip in, you got to take your hat off to him, because he is such a grinder and such a battler.”

The final score: Spieth, 73, McIlroy, 77. A one-under round on Sunday vaulted McIlroy into a tie for 10th, six shots behind Danny Willett, but good enough for his third straight back-door top-10 at Augusta.

McIlroy appeared to be peaking entering the U.S. Open at Oakmont. He tied for fourth at the Wells Fargo, was 12th at the Players, won the Irish Open and tied for fourth at the Memorial. He promptly cruised to an indifferent first-round 77 with eight bogeys amid weather delays, then grinded on the range on Friday night, pounding drive after drive alongside coach Michael Bannon. When he birdied four of the first seven holes in the second round, McIlroy seemed to have fixed his issues. But he came home in 40—including a four-putt —and missed the cut by two shots. He left the clubhouse without talking to reporters.

At the British Open, he sparked more intrigue in front of the microphone than on the course. In his pre-tournament press conference, McIlroy raised eyebrows when he said he didn’t get into golf to grow the game and that he might not even watch golf at the Olympics, instead focusing on the sports that “mattered.” On the course, he was never in contention, but he shot a Sunday 67 to move into a tie for fifth, 16 shots behind Henrik Stenson. The highlight of his week was snapping a 3-wood in frustration on Saturday.

“Look, I want to win,” McIlroy said on Sunday at Troon. “I want to play well. I think you guys are more desperate for it to happen than I am. But I’m happy with everything. I’m happy with where my game’s at. All I can do is keep plugging away. I feel like it’s definitely heading in the right direction.”

On Thursday at Baltusrol, he again was out for a late practice session, this time on the putting green with Bannon giving a watchful eye as McIlroy repeatedly rolled 10-footers. And again he left seemingly having found something that would lead to better results. And for a few holes on Friday, he had.

Then, as he’s done so many other times this year, he lost it.