PGA Championship: Jordan Spieth Can Take Over No. 1 Ranking at Whistling Straits

Jordan Spieth is closing in on McIlroy’s throne, aided by the Northern Irishman’s absence from competitive golf between the U.S. Open and PGA Championship due to an ankle injury.

Here is the list of scenarios in which the defending Masters and U.S. Open champ can oust McIlroy from the top spot at the PGA Championship. 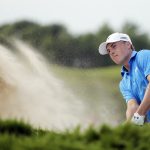 You may also like Jordan Spieth, Rory McIlroy Matching Each Other Blow for Blow at PGA

At 2-under par through 36 holes, McIlroy has safely made the cut (currently projected at +3), but the first three scenarios are very much in play.