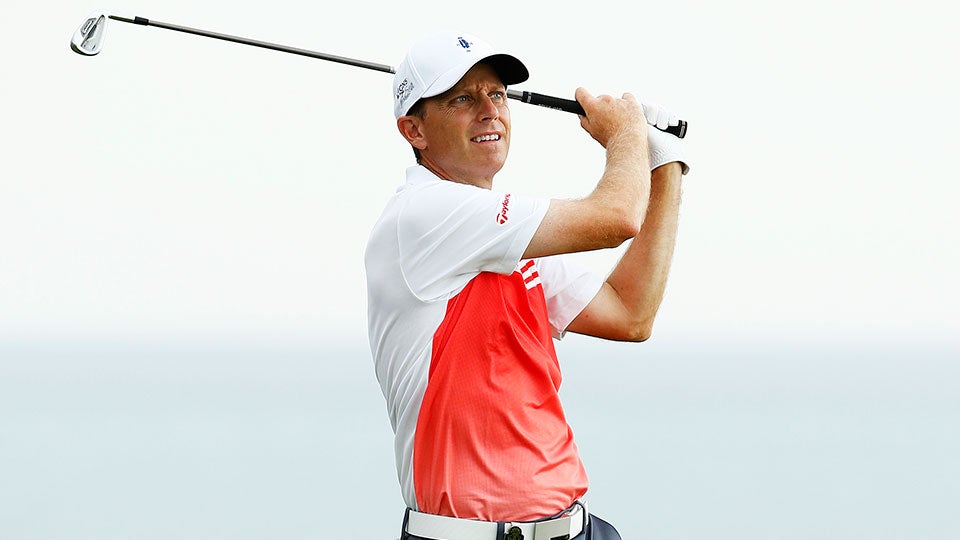 Brian Gaffney watches his tee shot on the third hole during the first round of the 2015 PGA Championship at Whistling Straits on August 13, 2015.
Getty Images

Brian Gaffney is the head professional at Quaker Ridge Golf Club in Scarsdale, New York. He qualified for the season’s final major with a birdie in a playoff at the PGA Professional National Championship. He has played in four PGA Championships in his career, and the 45-year-old opened this year’s PGA with a 1-under 71. This is a look at his week so far in his own words.

When you get to a major championship, there are many details that need to be covered. You have to get credentials for yourself, for your wife and for your family. You have to find a rental house. When you finally get to the course, you also need to get in a rhythm with your swing. You don’t want to practice too much, while still practicing enough to stay sharp.

This is my fourth PGA Championship, so that makes things a little easier. There is so much energy here, so much food everywhere, and so many people patting you on the back—it all strokes your ego. There is perfect turf on the range, and it’s stocked with the TaylorMade ball that I play. It’s all so perfect. You just want to hit balls all day.

I had the earliest tee time to begin the tournament at 6:45 a.m. We were in bed by 8:30 p.m. Wednesday night, and my alarm went off at 4:30 a.m. Surprisingly, I slept really well. When I got to the course, I went to the trailer to get stretched, then I went to eat breakfast. After a few putts, I was ready to go to the first tee.

My goal was to finish the round under par. I had an easy birdie putt on the first hole and left it short. That was just nerves. Fortunately I birdied four out of the next six, and at that point I really felt comfortable. I play this course differently from the Tour pros, and even some club pros. Matt Dobyns, a fellow club pro, told me he went for every par-5 in two. I couldn’t go for any! I’m only 140 pounds and just not built for that.

I played with Pat Perez and David Hearn. They might feel like they drew the short straw, getting stuck with me. But I saw them both on Wednesday and shook their hands to break the ice. There’s a small part of me that wanted to say, “If I’m in your way, let me know.” But there’s also a part of me that wanted to say, “I deserve to be here, I earned my spot.” But I keep that thought tucked away and remain humble.

To help ease any potential tension during the round, I respectfully said to them, “I’m going to mark my ball, which side do you want me to walk in on?” I’m also always ready when it’s my turn to hit. I stand in the right places. When you put those little things together, it tells them that I know what’s going on.

You may also like 2015 PGA Championship Postcard Stories: Inside Where the Players Stay

It was a long day. I teed off at 6:45 a.m. and was back at the course at 6:40 p.m. to do interviews for TV and XM radio. I won’t pass up those opportunities, because how often does this happen? After my round, I went home and took a quick nap. I was going to shower and change, but didn’t know if I should wear the same shirt for television. So, I put on a lot of deodorant, washed my face and came back to the course in the same shirt. It’s very cool for someone to ask for my time, and I’m flattered by it.

I hope the members back in Westchester are able to follow along and enjoy the event. I know when I make a birdie there are a lot of guys at their computers who will be excited. And when I make bogey, they are probably thinking, “Is it all falling apart now? ” I live and die along with them. It’s very special to have people back home to share this moment with me.

The lasting image from today was the first drive I hit. I caught it so solid. When I got to my ball, Hearn said, “That’s not your ball, it’s mine.” I was 25 yards farther! That is a moment I’ll remember. But that is not as important as the last hole. I hit a decent drive, caught a horrible lie in the rough and hacked it out. Faced with 116 to the hole, I hit gap wedge hole high. To hit a shot that did just what I wanted it to do was satisfying and still gave me a chance at par. I was really happy with that wedge shot. I made the putt for a 71—one under—and I hit my goal for the day of an under-par round.