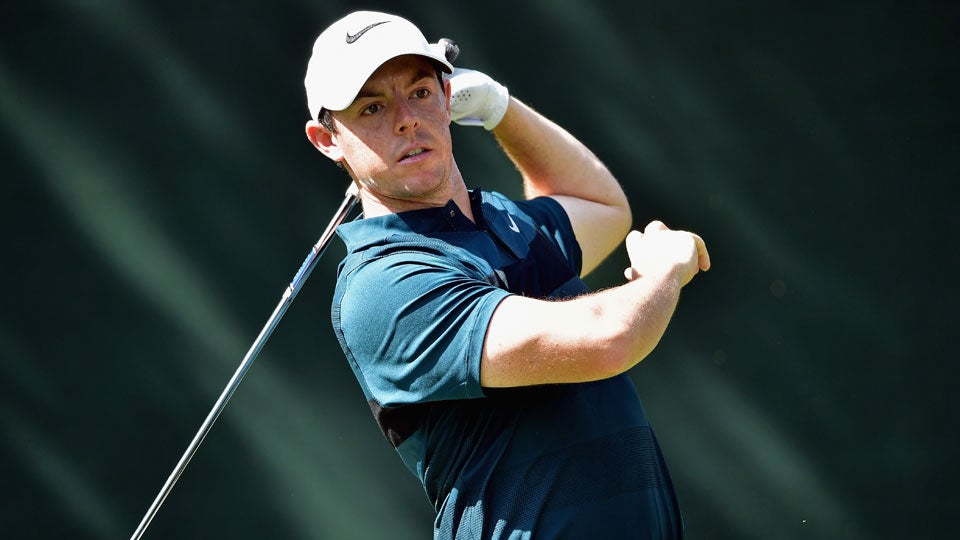 Rory McIlroy struggled to an opening-round 74 at Baltusrol on Thursday.
Getty Images

Springfield, N.J. — The PGA Championship has a quaint tradition of pairing together the three reigning major championship winners for the first two rounds, but don’t be fooled — on Thursday at Baltusrol the marquee group was Phil Mickelson, Rory McIlroy and Jason Day. That would be the lion in winter, the game’s most talented enigma and the World No. 1, respectively. During their 18 holes together we learned a lot of things: Day is a real threat to defend his title; Mickelson, an arthritic 46 year old, still has plenty of grind left; and, sadly, McIlroy is turning into a full-blown head-case.

Let’s start with Day, who shot the easiest 68 you’re ever gonna see. He hit 17 greens in regulation, picking up 4.74 strokes gained on the field tee-to-green. Day’s play on the uphill, 550-yard par-5 18th hole is symbolic of his macho ballstriking: he went 3-iron, 3-iron and was pin-high. Yes, Day converted only three of his birdie putts, but he burned a handful of edges and his speed on the greens was mostly excellent. If he keeps swinging like this he’ll only go lower, and he knows it. “I’m very excited about how I hit it today,” he said. “I hit a lot of good quality shots. Hasn’t been like that lately. To be able to go out there and hit it exactly where I’m [aiming] and see the shot and what I need to do and actually execute it was exciting for me. Really positive stuff going into the next three rounds.”

Getting off to a hot start is helpful to any player but was virtually mandatory for Day, whose fine season has been marred by disappointing play at the majors, including a 76 to open the U.S. Open, a first-round 73 at the British and a 72-73 start at Augusta. He admitted earlier this week that at the majors he has been feeling the pressure to justify his lofty perch in the World Ranking. “There’s a little bit of expectation on my shoulders,” Day said. “You’ve got to come out and fire on all cylinders and get yourself up the leaderboard and show people that you’re there and ready to win. I think if you try a little bit too hard sometimes, you can kind of shoot yourself in the foot.” Now he can exhale and simply play his game, which, it should be noted, took Day to a record 20-under par at last year’s PGA.

While Day is back to making the game look easy, McIlroy was a woebegone presence throughout the opening round. He had droopy body language by his second hole, already beat down by his season-long inability to convert on his bountiful scoring opportunities. His birdie-less 74 evoked that disastrous birdie-less 77 he had shot on Masters Saturday in front of god and Jim Nantz (and playing partner Jordan Spieth.) On Thursday at Baltusrol, McIlroy took 35 putts and failed to hole anything longer than 6 feet 11 inches, leaving a series a makeable birdie putts short of the hole. He lost a whopping 3.95 strokes-gained to the field and it got so bad that at one point James Corrigan, the salty scribe for The Daily Telegraph, tweeted, “If Carlsberg made putters, Rory McIlroy would pour it down the toilet.” To which Ian Carter, a BBC Sport correspondent, parried, “He might miss.” Afterward McIlroy stated the obvious in calling his troubles “a mental thing.” He added, “I just need to be a little bit more aggressive, a little bit more free flowing with my stroke. … It’s good on the putting green. It’s just a matter of getting it from the putting green to the course. Maybe that’s why I’m starting to be a little bit more assertive and not quite as tentative.” The good news for McIlroy is that he’s pounding his driver and his iron game was sharp. But as we saw during his missed cut at the U.S. Open or Saturday 73 at Troon, there is an elemental spark that is missing, and it’s hard to imagine he’s going to find it on the sweltering practice green at Baltusrol.

While McIlroy continues to do less with more, Mickelson came through with a gritty high-wire act to stay in the tournament. A post-Troon letdown was inevitable, and sure enough Phil the Thrill bogeyed four of his first 11 holes. But he scrapped his way to a trio of closing birdies, beginning at number three, what he called the toughest hole on the course, salvaging a 71 that has him in the middle-of-the-pack but feeling rather buoyant. “I’m in a position where I know I’m playing well,” he said following the round. “If I go out tomorrow and just play a good round, I think I can shoot mid 60s and get back in it and that’s the goal.”

By the end of the day Mickelson had already diagnosed his maladies at the outset of the round: “When you get into a major championship and the penalty for a miss is severe, it’s very easy to steer it, try to control it and not swing freely. That was what I did early on today, I kind of steered a lot of shots. I didn’t swing freely. I was quick from the top. My rhythm wasn’t great. All of that is try to control the results rather than just swinging the way I’ve been swinging and playing the game. Took me a little while, I kind of got into the flow there towards the end. I hit six out of seven fairways on my second nine. That’s the stuff I need to do and not be so impatient.”