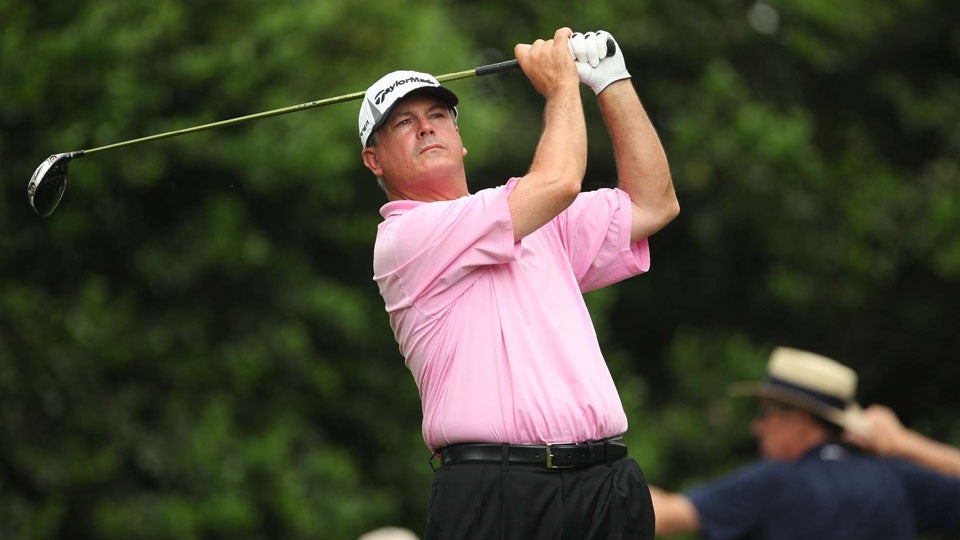 SCOTTSDALE, Ariz. (AP) — Paul Goydos shot a 3-under 67 on Saturday to take a two-stroke lead into the final round of the PGA Tour Champions’ season-ending Charles Schwab Cup Championship.

A day after opening with a 62 for a three-stroke lead, Goydos birdied the par-5 18th to reach 11-under 129 on Desert Mountain Club’s Cochise Course.

“I was happy. It was a nice day,” Goydos said. “The wind had calmed down a little bit. It seems to be windy in the morning here and better in the afternoon. Playing good’s an advantage to some extent.

Points leader Bernhard Langer was third at 7 under after a 66.

The top five in the standings – Richmond winner Scott McCarron is second, followed by Montgomerie, Joe Durant and Miguel Angel Jimenez – can take the season title with a victory Sunday. Durant was tied for 15th at 1 under after a 69, McCarron was tied for 17th at even par after a 71, and Jimenez was 22nd at 1 over after a 67.

The season standings were reset after the event last week in Virginia, with Langer’s lead over McCarron reduced from 935,657 to 200. The tournament winner will receive $440,000 and 2,000 points.

“I just know that there’s a bunch of possibilities like we imagined and here we are,” Langer said. “I guess right now if it stands like this, Monty and I would be tied and we’re going to a playoff. But will it stand that way tomorrow, nobody knows. I don’t know. It’s certainly exciting, it’s volatile. You know, it comes down the stretch.”

The 59-year-old German has a tour-high four victories and has wrapped up the season money title with $2,836,459. He won season titles in 2010, 2014 and 2015. He’s recovering from a left knee injury that forced him to withdraw from the playoff opener at Sherwood.

“It’s been the same for the last two weeks, just being very careful walking,” Langer said. “I can’t read my putts properly because I can’t bend down the way I used to. But my goal is to finish the tournament, not to read my putts properly. Obviously, I would love to read them right, but if that would kick me out of the tournament, that’s no good, so I’ve just got to do what I’ve got to do.”

Goydos is 24th in the standings. The two-time PGA Tour winner won the Dick’s Sporting Goods Open in July for his third senior title. He shot a 59 in the PGA Tour’s 2010 John Deere Classic.

“I’ve gotten off to good starts and, hopefully, I can continue that tomorrow,” Goydos said. “A little sloppy on the back nine, quite frankly. But I’m Paul Goydos, I’m not Bernhard Langer, as I’ve proven time after time after time after time. But I hung in there pretty good. Made a couple birdies on the 5 pars, which is nice, and looking forward to playing tomorrow.”