Paul Dunne, shown at the British Open at St. Andrews, will play the U.S. Amateur later this month at Olympia Fields.
R&A/Ian Walton

Paul Dunne, the Irish amateur who took center stage during the British Open, will play in the U.S. Amateur later this month at Olympia Fields via special exemption from the USGA.

The 22-year-old born in Dublin shot rounds of 69-69-66 in the first 54 holes at St. Andrews and was tied for lead at 12-under with Louis Oosthuizen and Jason Day. He was the first amateur to hold any share of the 54-hole lead at the British Open since Bobby Jones in 1927.

In the final group Sunday with Oosthuizen, Dunne stumbled to a 78 and finished T30. Nevertheless, the recent University of Alabama-Birmingham graduate made a name for himself, all but carving out his place in the future of golf. 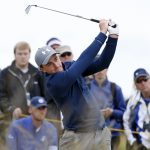 You may also like 2015 British Open: Paul Dunne Five Things to Know

Dunne captured attention for another reason; he not only played like Jordan Spieth, but looked like a mirror image of the Masters and U.S. Open champ reflected across the Atlantic. Spieth had been touted as the steal of the century for Under Armour, but with UA logos everywhere and no contract, Dunne may have held that title—at least at the British Open.

As a collegiate golfer, Dunne was the Conference USA Player of the Year in 2014 and finished fifth in the 2015 NCAA Men’s Division I Championship. He is currently No. 38 in the World Amateur Golf Ranking.