Paul Casey’s career has had its road bumps, but he’s finally ready to break through

ERIN, Wis. — More than a decade ago, Paul Casey’s swing coach, Peter Kostis, opined that he would consider the young Englishman’s career to be a disappointment if he didn’t win multiple major championships. Everyone’s All-American at Arizona St., Casey used to make the game look a little too easy. He was a rock for Europe in three straight Ryder Cups beginning in 2004, and in 2009 he reached as high as third in the world ranking. Fleet Street was atwitter, having finally found the Next Faldo.

But Casey suffered a stinging rebuke from Colin Montgomerie in 2010, when the blustery Scot snubbed Casey for a captain’s pick at the Ryder Cup. Casey was 7th in the world at the time; his countryman Justin Rose said the vote of no-confidence “left a bit of a scar” on his old friend. Then life really got in the way: injuries, divorce, a touch of apathy. Casey turns 40 next month and he feels every step, having worn out all of the cartilage in his right big toe. “It’s excruciating,” he says. “I take two hundred milligrams of man-up and get on with it.”

He has won only once in America (though he does have 13 victories on the European tour). He’s remarried, to the English television personality Pollyanna Woodward, whose shapely, lingerie-clad form adorns Casey’s phone case. They have a young son and another kiddo on the way; putting family first, he has given up his Euro tour membership to reduce travel form his home-base in Arizona, which means he’s not eligible to play in the Ryder Cup. Casey hasn’t given up, exactly, but he is comfortable with his changed priorities. “I’m very content with my life,” he says. And yet now, suddenly, he has the chance to become the player he was always supposed to be. During the first round of the 117th U.S., Casey eagled the opening hole and went on to shoot a stellar 66, but what he did on Friday was even more impressive. He birdied his second hole of the day (the 11th) to surge into the lead and then everything went pear-shaped: a bogey on 12 and then a triple-bogey 8 on the 14th hole, during which he had an extended misadventure in the fescue. Punch-drunk, Casey bogeyed the next hole, too.

The second round had become a tidy metaphor for his entire career to date: so much promise but ultimately disappointing. And then something funny happened: Casey fought back. A beautiful approach on 17 and then a stone-dead pitch at 18 led to back-to-back birdies. He made it five straight with birdies on the 1st, 2nd and 3rd holes. Improbably, that took him back to under par for the day, and his 71 left him at seven under and with a share of the lead, along with Brooks Koepka, Tommy Fleetwood and Brian Harman.

“Not every day you enjoy a round of golf with an 8 on the card, but I’m a pretty happy man,” he said afterward. Could he have displayed that kind of toughness earlier in his career? “Probably not,” Casey said with a laugh.

He credited his caddie Johnny McLaren, wife and son for the attitude. In fact, Casey has always had a broader perspective. He’s an intellectually curious chap with a wide range of hobbies, though after dislocating his shoulder years ago snowboarding is no longer among them. He used to mountain-bike in Whistler with assorted pro riders but is now forbidden to do so, he says. By his wife?

Now he gets his rocks off on road bikes. In a couple of weeks Casey will go on a week-long, 360-mile ride through the Italian Dolomites, doing up to 50,000 feet of elevation per day. But there will be very little suffering: The trip includes a gourmet chef and masseuse. As much as he will be sweating, Casey says he will still end every day “calorie-positive” owing to the fine food and wine. “It won’t be a dry affair,” he adds. 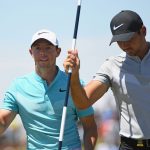 You may also like Dustin Johnson, Rory McIlroy, Jason Day among stars to miss the cut at the 2017 U.S. Open

Casey is aware of the outsized expectations his swing coach has always had for him, and he says of Kostis, “He’s clearly disappointed then.” But Casey points to Henrik Stenson as a role model, as last summer the 40-year-old Swede finally broke through with his first major championship victory. Casey has 10 career top-10s at the majors, including at the last three Masters. (This year at Augusta National he had six three-putts and finished five strokes behind Sergio Garcia, who had only one three-jack.) Of his lack of major championship hardware, Casey says, “I’ve got to the point, it’s no longer a burden. I thought about it more a few years ago. To me I’m still inspired. I’m fully capable of doing it. I need a little bit of luck, I have to I admit. I have to play some great stuff and get a little fortunate.”

Fortune favors the bold, and no one at this Open has displayed more mettle than Casey. Maybe a triple bogey is exactly what he needed. It’s time for Casey to climb to greater heights, and not just on his bicycle.