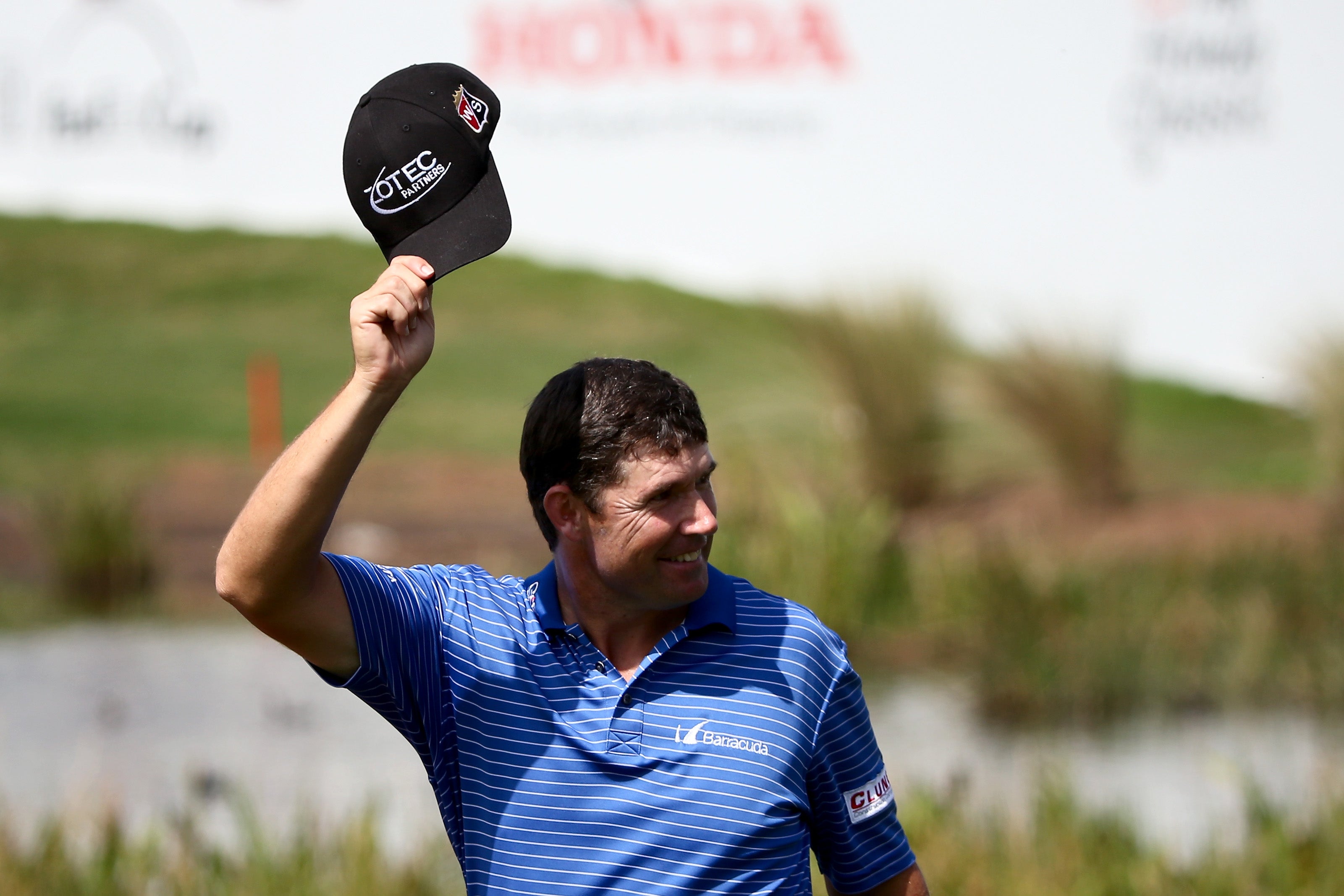 The race for the annual Free Pass Championship (FPC) is suddenly wide open. Irishman Padraig Harrington had opened a nice lead, but he likely knocked himself out of contention for my coveted FPC title, an award I dole out each season to the pro who scores the most PGA Tour sponsor’s exemptions (free invites into tournaments).

Harrington had accepted seven exemptions already this season, then used one of those exemptions to win the Honda Classic. That earned him a two-year Tour exemption, so he won’t need any more free rides this year, though he said he will show up and play at the tournaments he already accepted exemptions from. Classy move.

That opens the door to some lucky challengers.

Patrick Rodgers, a Stanford alum who was runner-up in last year’s Free Pass Championship by receiving his non-member limit of seven, ranks second this year with five exemptions. He has made three cuts and won $57,115.

Former Masters champ Trevor Immelman, a surprisingly non-exempt past major winner like Harrington, will play at Bay Hill this week with his fifth exemption of the season. He made one check worth $16,405 so far. Immelman could be the guy to beat this year. He’s a former Masters winner, he’s got that name recognition and he’s a very nice guy.

This has been a banner year for exemption recipients. Besides Harrington’s win, Sean O’Hair got an exemption to play in the Valspar Championship, wound up in a playoff with Patrick Reed and Jordan Spieth, and finished second, cashing more than half a million bucks. O’Hair got another exemption this week to get into the elite field at the Arnold Palmer Invitational. It’s his third exemption.

Among those with three are familiar names John Daly, Scott McCarron, Chris DiMarco and John Rollins. As a foursome of free-passers, they’ve made a combined total of two cuts in 12 tries.

The Monday Man of the Year, given to the player who excels in Monday qualifying, is still a close race.

Four players have made it through Monday qualifying twice to get into tournaments — Jonathan Randolph, Wes Homan, Roberto Castro and Jin Park.

Garrett Osborn has a big lead in the Monday money list. Osborn’s ninth-place finish at the Sanderson Farms Championship was worth $100,000.

Van Cynical, Do you think Donald Trump will run for President? — Andrew Polson via Twitter

I doubt it. He couldn’t handle the pay cut. Or the rejection. Besides, in his own mind, he’s already won that election in a unanimous vote.

Van Sickle Cell, Is the mud ball the new Tour phrase for a less than desired swing/shot? — Brian Bailey via Twitter

Yes, Bailjumper, it is golf’s version of losing it in the lights in baseball. Catching a flier is also a euphemism for “caddie gave me too much club.” Players never hit bad shots. It’s somebody else’s fault. No sport has better plausible deniability than golf.

Sick Man, Now that Sean O’Hair is back, who will deliver my UPS packages? Seriously, where was he? — Mr. Fairway via Twitter

Seriously, Fairlawn? FedEx drops $50 million a year on golf and you’re still going with UPS in an otherwise hilarious question? (Don’t count that.) Golfers rise and fall like empires, only a lot faster and a lot more often. Good for O’Hair to turn it around and rise again. Long live Caesar!

Van Sinkhole, With Tiger not playing at Bay Hill, what are the odds that he won’t tee it up at Augusta? Will he really be back, ever? — SoCal Golf Guy via e-mail

I think I covered Tiger in every conceivable manner in my latest for Golf.com, Low Cal Guy. It’s all just speculation in the absence of hard facts, honestly. But let’s put it out there: Tiger’s comeback/return has gone from being a foregone conclusion to just a matter of time to questionable to a serious uphill battle. Just coming back and contending now would make him Comeback Player of the Year. All the way back, as in winning another major, that seems far, far away. He’s Tiger, you can never count him out … but it’s close.

Sicklemania, I’m afraid Tiger at Augusta will be similar to Willie Mays on the 1973 Mets. Give it to me straight, Gary. — Michael O’Connor via Twitter

That would be the smart-money bet, Mannix. But he is Tiger, a golfer capable of amazing things. His chipping issues are solvable if it’s not the chip-yips (a big if) and he’s never forgotten how to hit iron shots. I give him a chance to play respectably, but if a fly ball is hit to Tiger, I don’t think he’ll catch it. Dusty Rhodes in right better call him off.

Van Cyclical, Does Patrick Reed not have a soul, is he insanely talented or both? What’s wrong with this kid? — Bustinpar via Twitter

He is definitely insanely talented. As I wrote in my Valspar Championship recap, Reed is a combo platter of young Lanny Wadkins and Raymond Floyd with a mean streak. He loves to compete and, man, it’s do or die to him. No quarter, he’s there to cut your heart out. Reed and Jordan Spieth look like the first American golfers who are real closers since Phil Mickelson. They may turn the U.S. Ryder Cup fortunes around.

Vans, Your current Masters pick? Sleeper (a player outside the top 20) who can win? — Al Walker via Twitter

Well, young Skywalker, I will give you picks only because I am sure you are not using them for any gambling purposes. Bubba Watson can be skittish and squirrelly but his game has looked in fine shape, his short game better than ever, and his high lefty fade is tailor-made for Augusta. Duh, he’s won twice there. Outside the top 20 — do you mean the money list, the FedEx Cup points list or the world ranking? Forget I said FedEx Cup points. (Don’t count that.) Former British Open champ Louis Oosthuizen is back on his game and healthy. Remember he made a double eagle at Augusta and got nosed out by Bubba in a playoff? He’s got the game and the attitude and is my sleeper pick.