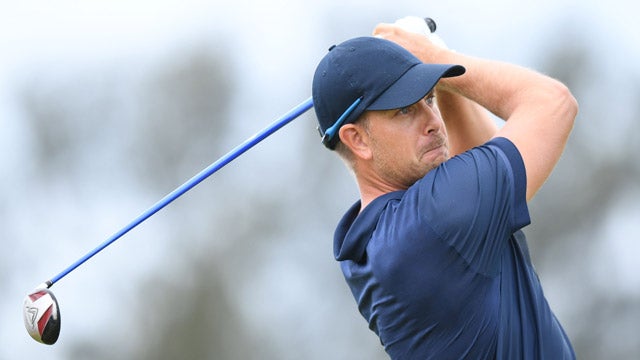 Henrik Stenson is two shots off the lead entering Saturday at the Olympics.
Getty Images

RIO DE JANEIRO — Day two of Olympic golf felt less like a party and more like a tournament, albeit one with Matthew McConaughey making the scene.

After an overnight rain softened the course, the players were presented with a sterner setup, and Olympic officials got their unstated wish with a more bunched leaderboard. First-round leader Marcus Fraser of Australia shot a typically workmanlike two-under-par 69 to reach 10 under, but only one shot back is Belgian bomber Thomas Pieters (66). Lurking in third place, at eight under, is big, bad Henrik Stenson (68). Tied for fourth at six under is Justin Rose (69) while the pack at five under includes Danny Lee (65, New Zealand) and Graham DeLaet (71, Canada).

Matt Kuchar (70) is the low American at three under, one better than Bubba Watson, whose topsy-turvy 67 included four bogeys and a hole-out for eagle on the par-4 3rd. Patrick Reed is still in the hunt (barely) at one under after a 69, while it appears Rickie Fowler (four over, 71) will medal only in non-Olympic activities, including social-media juice; he and McConaughey were electronic pals but had not met in real life until the star of Dazed and Confused and lesser classics showed up in his gallery, sporting a President Cup windbreaker no less.

Coming into the Olympics it was a nice thought that a Cinderella story from a country with little golf tradition could steal a medal, but halfway through, the leaderboard is dominated by established touring professionals from Western Europe and the antipodes. Stenson has already made history this summer at the Open Championship, and Rose conquered Merion three years ago, but for every other player in the top 15, the gold medal would be by far the biggest achievement of their careers.

“A lot of people think in a big tournament only the top players can win, but all of the guys here are good, solid pros and they’re capable of getting it done if they manage their game and manage themselves properly,” says Ian Baker-Finch, Australian golf captain. It is the very professional approach of Fraser, 38, that gives Baker-Finch the belief that his man can keep it together during the fraught final two rounds. “He’s very controlled, he makes wise decisions,” Baker-Finch says. “He practices with a purpose, he thinks through his rounds before he even puts a peg in the ground. He’s very diligent in everything he does.”

Fraser, a three-time winner on the European tour who currently leads the money list in Asia, has benefitted from the palpable team chemistry of the Aussie contingent. After his countryman Scott Hend finished his second round, he rushed out onto the course to watch Fraser play the final few holes. At his side was Baker-Finch, the boyish former British Open champ who can’t hide his giddiness at being part of the Olympic experience.

“He’s keen as mustard, mate,” Hend says about IBF. “He’s all over it. For a guy who achieved so much in world golf he’s so proud of his country and so proud to have us as team members. He so badly wants us to perform, he’s keen to pump us up. We’re professionals, we don’t really need any pumping up, but he’s trying his best. We’re having a great time at dinner, we haven’t stopped laughing all week. We behave as a team, we eat as a team…”

Drink as a team?

Fraser has bought in to this team concept completely, and it appears to be reducing the pressure he feels to achieve individual glory. As he said following the round, “Absolutely, we’re here for one reason, to try to win a medal for Australia.”

While Fraser’s game is built on hitting fairways and making putts, the 6’5” Pieters is capable of overpowering any course. At 24, he is just figuring out how good he can be, having won back-to-back starts on the European tour last year. Countryman Nicolas Colsaerts—known in some golf precincts at “The Dude”—describes his protégé as a player with no weakness: “He’s a good ballstriker, he hits the ball a long way, he’s good around the greens and he’s a streaky putter. When he’s putting well he’s capable of these showings in the biggest events. Honestly, I expect more of this from him.”

The 2013 NCAA champion while at Illnois, Pieters can come off as shy and retiring, even after finishing a round with three consecutive birdies, as happened on Friday. But that’s not who he is to friends in his native Antwerp. “He’s into music, clothing, all the stuff Antwerp is known for,” Colsaerts says. “It’s by far the most cutting-edge city in Belgium and it reflects in his personality. He listens to music that makes me realize I’m getting a little old.”

“No, this is quite gentle. I’m just telling it how it is.”

Anyway, Pieters is not shying away from the magnitude of the moment. He calls his time in Rio “the best week of my life so far” and is openly coveting a medal, saying, “If you don’t dream about it, you’re never going to achieve it.” He and Fraser will face among the biggest challenges of their careers when they play on Saturday in the final pairing alongside Stenson, the world number two. The Swedish Iron Byron had an atypically wild round, birdieing the first two holes in the rain, the latter on a 58-foot snake, and then saving par at the 3rd with a putt that measured 108’7”. “You’re just standing there praying for a two‑putt bogey,” Stenson said afterward. “Before I know it, it found the bottom of the cup. That’s the longest putt I’ve made in my career, I would say. First of all, it’s hard to get a putt that long on any green in the world.” The finish to his round was also action-packed as Stenson didn’t par any of the last five holes, recording three birdies and two bogeys.

He was cheered throughout the round by members of the Swedish handball team, which inspired Stenson to keep grinding. “When you have some of the best athletes out there, you want to try to hit it close and I did on a couple of occasions,” he said. This led to a vintage Stenson riff on how the sports might be combined: “I wouldn’t mind playing a round where I can kind of tackle the same way as those guys do. It could make for good television. Top of the backswing, someone comes in and just topples you over.”

In fact, it may take something like that from Fraser or Pieters to stop Stenson. There are a lot of very good, very seasoned players on the Olympic leaderboard, but only one alpha male. He’s the guy with the yellow and blue flag on his heart.