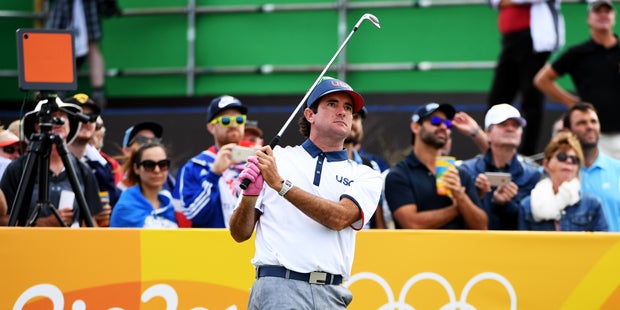 Bubba Watson is in a good mood. Buoyed by his experience as an Olympian–he’s enjoying every minute of Rio, from exploring the Olympic Village to cheering on American athletes in other events–Watson took a duffed putt on the 14th hole in stride.

Watson’s attempt at a 35-foot putt only rolled about 6 feet. He later blamed the miss on a clump of mud that was stuck to the bottom of his putter. But he wasn’t defensive or bitter about the mistake. Instead, he laughed.

Bubba’s play yesterday has earned him a spot near the top of the leaderboard and the chance to win a medal today. But he’s not too hung up on the outcome.

“I haven’t even been wanting to look at a leaderboard. I don’t know how to put it into words; I really don’t care,” he said. “I’m out here enjoying it, being so blessed that we get to play in the Olympics.”