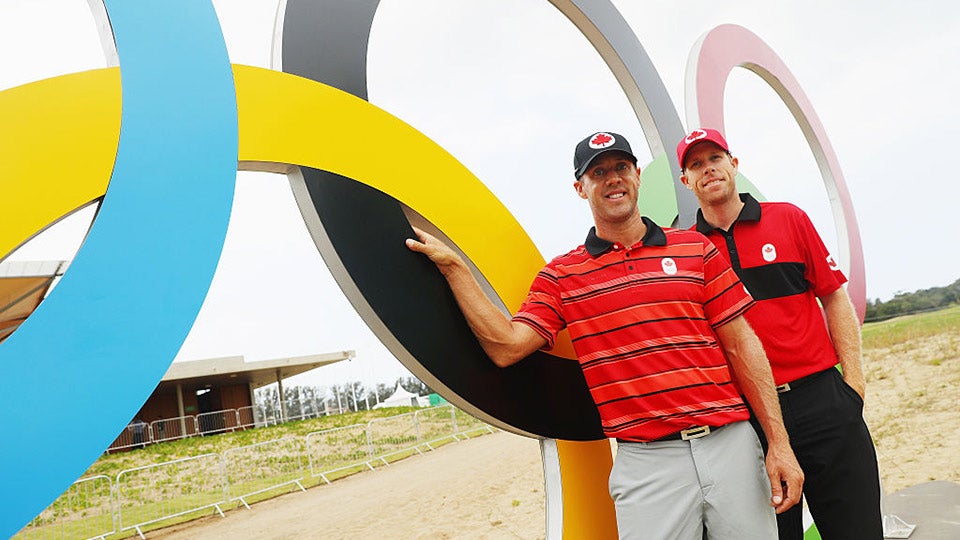 RIO DE JANEIRO — After 112 years, and a very tumultuous last few months, the wait is finally over: Golf is back in the Olympics…like it or not. But after an excruciating run-up during which many top male golfers withdrew, along the way casting aspersions about the host city and its people, golf in the Games has turned into a surprisingly joyous occasion.

Monday was the first day at the Olympic Golf Course in which pretty much the whole field gathered and the good cheer was palpable. The players looked particularly spiffy in their team uniforms, the usual tacky corporate logos replaced by the flags, colors and iconography of their homeland. (Martin Kaymer’s get-up looked like it had been designed by Hugo Boss channeling Leni Riefenstahl.) Said Anirban Lahiri, “Now that everyone is here we are all getting over the hype or the fear or the enigma that shrouded this event. You put on your country’s gear and right away you feel in your bones this is unique, it’s special. There is nothing like this on Tour and there can never be something like this on Tour. All of us who are here are so happy and honored to be here.”

The four rounds of individual stroke play commence on Thursday, but while it’s every-man-for-himself, the players still enjoy the support structure of their national team. Paul McGinley, the captain of the Irish side, was standing behind the 18th green when the French competitors Julien Quesne and Gregory Bourdy sauntered by. “Allez le blue!” Quesne woofed. Translation: Go France. McGinley was still laughing after they had walked away. “Look at those guys, smiles on their faces, stopping to shake hands and have a little banter,” he said. “At a European Tour event you might not even get a nod. For the people who are here there’s a camaraderie that is really, really unique.”

Adding another element to all of this is that a good number of the female competitors are already on-site and practicing alongside the men, even though the women’s competition does not begin until August 18. Kaymer played a practice round on Monday with Brazil’s wonderfully named Victoria Lovelady, tapping her local knowledge on everything from the grain of the greens to her preferred churrascaria. Israel’s Laetitia Beck was working plenty of side-eye at the driving range. “It’s an amazing opportunity to observe and learn from so many great players,” she said. “I would never go up and introduce myself. I just try to watch without appearing to be a stalker.”

Everyone has a fun story about life in the Olympic Village, though some have to be kept on the down-low. “By all accounts,” smirked one International Golf Foundation official, “Rickie Fowler is having the time of his life in the Village.” Beck is the only golfer from her country in the field, male or female, but she has been welcomed by the entire Israeli Olympic team, sharing kosher meals as well as training advice. “This morning another athlete was like, I’ll give you a putting tip… and he was serious,” Beck says. “It feels good to be accepted as one of them.”

Whereas most other sports at the Games are conducted on standardized playing fields, the Olympic Golf Course is sui generis and will be among Rio’s most scrutinized venues. The early raves for Gil Hanse’s design have been thunderous. “It’s brilliant, I love it,” says Australia’s Marcus Fraser. “You step on this course and straightaway it gives you a good feeling. There’s lot of birdies out there, but lots of places to get into trouble, too. Putting will be important, as it always is, but it’s more of a complete test. There are holes that favor bombers and holes where you have to be very precise. The greens demand a lot of different shots. And you can see how versatile it is, with many different teeing grounds. I expect there will be a lot of yardage changes from day to day, so it will never play the same way twice. It’s a great test all the way through.”

Kingston Heath and Royal Melbourne were inspirations for Hanse in the bunkering and green complexes, so it should come as no surprise that Fowler’s caddie Joe Skovron called the course “very Sand Belty.” Ian Baker-Finch, the minder of the Australian team, agrees only up to a point: “It looks like home but it doesn’t play like it. The course doesn’t have any fire in it. The grasses are grabbier and the course is a bit soft. I think they’ve watered too much—they want it to look green on TV. But it would play much better as a blonde.”

Hanse is in agreement, and on Monday he and Baker-Finch were planning to appeal to the powers-that-be to firm up the course. But with the women’s competition looming next week the set-up can be pushed only so far. For now, the greens are rolling about 10.5 on the Stimpmeter, and can’t get much faster because of the windblown site. With an absence of rough and fairly open playing corridors, aggressive golf will be rewarded but a deft touch in the short game remains paramount. “What I think is so cool,” says Graham DeLaet, “is that around the greens you can hit anything from a 3-wood to a hybrid to 9-iron to a sand wedge to a 64-degree wedge.”

It is this required variety of shots that has left those on the ground puzzling over the gold medal favorite. Says McGinley: “Does it favor any one person or nation? I don’t think so. It reminds of the Carolinas, Kiawah Island and such, it looks Australia and it feels like a windswept links from Britain and Ireland. And then you have very modern grasses, with Paspalum greens and Zoysia fairways. So I think many players will happy and comfortable.”

The good vibes extend well beyond the golf course. To go only by the public comments of the top-ranked golfers who bailed out you would think Rio is a land of pestilence and Purge-like violence, but the golfers who bothered to make the trip have been delighted to discover, like everyone else, that it is a great city imbued with the warmth of its people. “It’s been an unbelievable experience,” says DeLaet. “Actually, I’m really disappointed about all the bad press Rio has gotten because it’s been nothing but 100% class so far.”

As social media has helped disseminate this message—Fowler in particular has been an ambassador of good vibes—and the glory of the Olympics plays out every night in primetime, it’s logical to wonder if any of the brand-name players who took a pass have regrets. It is already the subject of much mirth at the Olympic Golf Course. On Monday, Nick Faldo was out scouting the design and he even stopped to compare notes with Johnny Miller, who was doing the same thing. Faldo had a laugh imagining the Jordan Spieths and Rory McIlroys of the world, at home missing out on the party of the year. Says Faldo, “You know when you realize you’ve made a really bad decision but it’s impossible to change it, how you get the cold sweats and the shits? I’m sure that’s how all those guys are feeling now.”

Golf has already benefitted from one indelible image from this Games, when Mohammad Rahman carried the flag for Bangladesh in the Opening Ceremonies. “You can’t image what that will do to raise awareness of our sport in Bangladesh or Myanmar, or India or Thailand for that matter,” Lahiri says. Now, with the competition finally upon us, stakeholders in the game continue to see the bigger picture. Says McGinley, the 2014 European Ryder Cup captain, “It’s quite humbling to come out of the realm of being a golfer and think everything we do is so important and then put yourself in the context of all these other sports. The Olympic experience is good for the head and the heart. Yes, it’s a shame for the game we don’t have our superstars showcasing the game. I think the Dream Team in Barcelona did a huge amount for basketball, and if we had all of our superstars here I think it would have created a big buzz for golf. But look, we still have plenty of great players here, and hopefully in the end we get an iconic image so that everyone will remember, Golf was there, golf was relevant. This is still our chance to show the world what a great game we have. I believe in my heart that we will.”