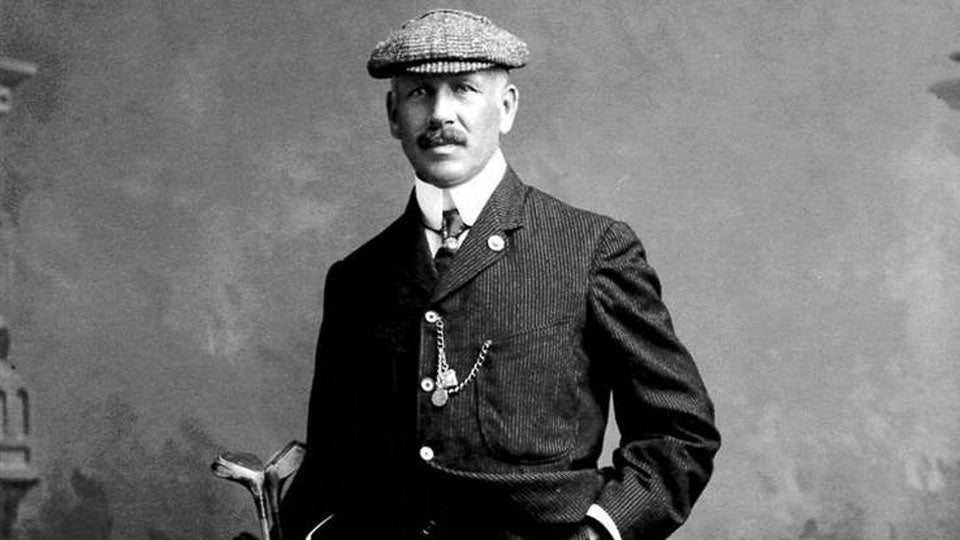 I had just finished a round at Rosedale Golf Club in Toronto in 2012 when I spotted one of the ancient game’s rarest artifacts.

Hanging on a wall in the pro shop was an Olympic gold medal – for golf.

The club pro told me it was the very medal won by a Torontonian at the 1904 Summer Olympics in St. Louis. Come again? I had been playing golf since 1997, one of millions drawn to the game because of Tiger Woods’s astonishing victory at the Masters that year. I was hooked on golf, and I was fairly certain that it was not an Olympic sport.

Curiosity piqued, I set off to find the story behind the medal and discovered that, before there was a Tiger, there was a Lyon.

George Seymour Lyon was a natural athlete and well-known sports figure in Toronto in the late 1800s. He excelled at baseball, football, track and field, lawn bowling, hockey, curling and especially cricket, a sport in which he set a world record as a young man when he carried his bat for 238 innings.

One beautiful October afternoon in 1895, Lyon stood waiting for his cricket mates at the Rosedale Cricket and Lacrosse Fields. His friend John Dick stood nearby at the first tee of the new golf course the club had squeezed onto an adjacent cow pasture running between the popular cricket fields and the railway tracks. Lyon was less-than-enamored with golf. Perhaps that was because of the dairy cow that he sometimes saw grazing on the course, or because golfers stepped in the occasional cow pie.

Lyon had other quibbles with the game. Golfers required a veritable toolbox of clubs, there appeared to be more standing around than in other sports and, good lord, women were allowed on the course. His pal’s invitation to give golf a try might have been politely rejected that afternoon had Lyon’s cricket team shown up on time. The squad didn’t. So, with low expectations and mild contempt for what he was about to experience, Lyon ventured out with borrowed hickory-shafted clubs under the tutelage of his friend to play his first nine holes.

Something happened out there in the pasture, because the next day Lyon asked to be proposed as a member of Rosedale. He had caught the golf in a bad way and within three years was the Canadian Amateur champion.

Over the next few years, Lyon honed his competitive skills in international competitions with American teams, but it was the chance to play one of golf’s greats that really whet his appetite for the big matches. In 1900, the English golfer Harry Vardon, sponsored by Spalding Sporting Goods, promoted the Vardon Flyer ball in a series of exhibition matches around North America. One afternoon at Rosedale, Vardon agreed to play against the best ball of Lyon and his partner. The Brit put on a clinic with his short game and putting, set a course record and in the process took down Lyon’s team. The lesson was not lost on Lyon. He won the Canadian Amateur later that year and again in 1903. Eight years in the game, three national amateurs. In Canadian golf, at least, Lyon was the man to beat.

As Lyon sat in the library of his Toronto home in April 1904 reading the March 4, 1904, issue of Golf Illustrated, the dream of Olympic golf was laid out before him. The magazine had published an invitation to golfers worldwide alerting them to the fact that a special American Committee had been established to conduct the Summer Olympiad at St. Louis. Golf, the article explained, would be one of the competitive sports for “the first time in history.” Lyon knew that this last part was not quite true as golf had in fact been a sport at the Paris Olympics in 1900. An event of no more than a dozen golfers had been held at the Compiegne Club in a small town outside Paris. No medals were awarded and many of the competitors had no idea they were even in an Olympic event until after it was over. Hardly what Lyon imagined for Olympic competition.

But in 1904 the Olympics would be held in America, the new world power. This Olympiad would top the previous events held first in Greece in 1896 and later in Paris. To add an extra level of excitement, the organizers paired the Olympics with the St. Louis World’s Fair. Americans wanted to show the Europeans and the rest of the world what American know-how and athleticism were all about.

“It is to be hoped that some of the very best of the British golfers will consider the honor of winning the Olympic championship medal grand enough glory to be a sufficient inducement for them to make the journey and compete. ‘Tis the mere glory of winning a coveted title and of being the proud possessor of the distinguishing badge, not the intrinsic value of the prize itself, that makes the true amateur sportsmen so keen to win it. The title of Olympic golf champion should certainly be as eagerly sought as amateur champion of Great Britain or the United States. Possibly a dark horse in the person of some golfer hitherto unknown to fame may win the coveted honor.”

A dark horse? The thought appealed to Lyon, but he had to wonder: By the time the Olympics started in September, he would be 46. Would he have the strength and stamina to compete against the world’s best young players? He had read about the achievements of these men: the 19-year-old boy wonder Chandler Egan, who had lead the Harvard golf team to three consecutive championships, the great amateurs from England and Scotland. Still, Lyon was ready.

Glen Echo Golf Course, the first 18-hole course west of the Mississippi, would host the event thanks to the determination of its co-founders, Colonel George McGrew and his son-in-law, Albert Lambert. Lambert had competed in Paris in 1900 while on business related to his company, Lambert Industries, the maker of Listerine mouthwash. The two men made it their mission to put their best foot forward for Missouri. The invitation noted that the course was of “generous length” at 2,055 yards going out and 3,171 coming in with holes varying from 148 yards to 538 yards.

For the competition itself there would be a 36-hole stroke-play qualifier on Monday, Sept. 19. The top 32 golfers would move on to a week of daily 36-hole match play. The match-play finalists would meet on Sat., Sept. 24, to battle for gold. There would be consolation matches for those eliminated along the way, team competitions, putting contests and a long-drive competition. The top finishers would go home not only with medals but also with magnificent trophies .

Lyon and his friend Albert Austin, co-founder of Lambton Golf Course in Toronto, along with Austin’s son traveled by rail to St. Louis to compete. Only Lyon qualified for match play against a field of talented Americans.. While more than a dozen countries from four continents were represented in other competitions, golf drew participants from just two nations. Was it a snub from the Europeans? McGrew had even promised to send a ship to transport the golfers. None accepted.

As the two men from very different generations walked to the first tee at Glen Echo a veritable monsoon had descended upon the area. Rain and wind lashed the course but the golfers set out for the 36-hole final followed by hundreds of spectators tucked under umbrellas, many of whom had come from the World’s Fair to see the contest. After 18 soaking wet holes, Lyon was 1-up. The men broke for lunch, changed into dry clothes and then resumed their match.

The weather improved marginally, and with the help of a streetcar broom to sweep the greens of water, the two men slogged their way around the muddy layout. After six holes, Lyon was 4-up. But Egan would not quit. With four holes to play, he had cut Lyon’s lead to just one. With honors on the next hole Egan squandered an opportunity when he found the water off the tee. Lyon took a two-hole lead. They moved on to the 34th hole, a 430-yard par-4 dogleg left named Punch Bowl. Lyon crushed another drive, while Egan, in a futile effort to match the blast, found trouble again. And again. And again. When it was over, Lyon had won the hole with a 4 to Egan’s 6. Lyon def. Egan, 3&2.

An exhausted Egan retired for the day. Lyon, after an arduous contest in heavy plus-fours, made his way to the clubhouse, removed his rain soaked wool jacket and hat and proceeded to walk — on his hands — across the dining room to receive his trophy and medal from a beaming Colonel McGrew.

Lyon returned to a hero’s welcome in Toronto. Today his trophy is safe in the Canadian Golf Hall of Fame, but his medal was lost and has never been found. Was it sold for the value of its gold during the long Depression that gripped Canada from 1929-40? Was it stolen? Was it given away to a friend? No one knows.

What I do know now, though, is that the framed medal on the wall at Rosedale is not Lyon’s gold medal. It is not even a replica. It is, in fact, a replica of a track-and-field medal that the IOC gave to Lyon’s family as a replacement for the lost medal. The family in turn donated it to Rosedale.

Next month, after a lengthy absence, golf will return to the Summer Olympics in Rio de Janeiro and George Lyon’s 112-year reign will end. With Brazil facing a host of political, economic and public health crises, several top golfers – Jason Day, Rory McIlroy and Adam Scott among them – have withdrawn their names from the competition, leaving golf’s future in the Olympic Program in doubt. But who knows? Maybe the competition could spark some much-needed interest in the game and inspire an unlikely athlete to go for gold in golf.

After all, it happened once before.

Michael Cochrane is a Toronto lawyer and author. His debut work of historical nonfiction, Olympic Lyon: The Untold Story of the Last Gold Medal for Golf, is available in bookstores, on Amazon and through www.georgelyon.ca.