Olympic Golf: 5 Things We Learned on Day 2 in Rio 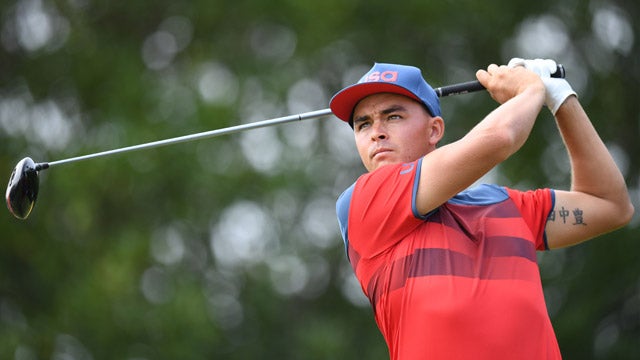 Rickie Fowler carded 75-71 to open his Olympic debut and is in 50th entering the weekend.
Getty Images

The bad weather reversed itself Friday, rolling in for the morning at the men’s golf competition instead of the afternoon on day one. That didn’t seem to phase 38-year-old Australian Marcus Fraser, who shot 69 and became the only player to reach double digits under par at 10 under.

Here are five things we learned from a soggy day in Rio.

1. Rickie Fowler’s golf continues to be the least interesting thing about him in these Games.

He shot an even-par 71 Friday, which beat his opening round score by four strokes. Good for him. Even better: Fowler, who has been hanging off the course some with Mr. Gold Medal Michael Phelps, was followed Friday by Olympic super-fan and Oscar winner Matthew McConaughey. “Yeah, we’ve always followed each other on social media,” Fowler said, “and we linked up this week and we’ve been texting. He said he was going to try to come out to the golf. Pretty cool that he was able to make it. I know he’s flying out this afternoon.” 2. Olympic golf is becoming a referendum on whose game can travel. (Hint: It’s not the Americans.)

From the sponsor-free uniforms to the multi-colored bleachers behind the 18th green, this tournament looks nothing like a regular PGA Tour event, or even a major. That may be why you see so many Europeans and/or European tour players at the top: They travel well. Take Belgium’s Thomas Pieters, who shot a second-round 66 to get to 9 under, just a shot back. According to his website, this year alone the 6-foot-5 snowboarding enthusiast has traveled 2.42 times around the globe, spanning 96,894 kilometers and hitting tournament sites in the Middle East, Europe, Asia and America.

3. No one is quite sure what to make of the Americans’ lethargic first 36 holes.

Friday was a better day for the Stars & Stripes, with Matt Kuchar shooting 70 to get to three under, Bubba Watson firing a late-afternoon 67 to get to two under, and Patrick Reed shooting 69 to get to one under. Still, barring a big comeback this weekend they seem to be out of contention, putting NBC golf commentators in a bit of a tough spot. “Just pet it right in there,” Johnny Miller said as Malaysia’s Danny Chia stood over a putt. Groan.

4. Anyone within two or three going into the last three holes Sunday has a shot.

The 288-yard 16th is easily drivable, NBC’s Miller wondered aloud if the 17th is the easiest par-3 in pro golf, and almost everyone in the field can reach the par-5 18th hole in two shots. Watson reminded us how soft the course’s closing holes are when he birdied all three of them Friday. Kuchar would have done the same had he not missed a bunny on 17.

5. Even with the Americans struggling, the cream could still rise to the top.

Justin Rose, 12th in the World Ranking, is four off the lead after shooting 69 Friday. Fifth-ranked Henrik Stenson shot 68 in the worst of the weather to get to eight under, just two back. The reigning British Open champion drained a 108-foot putt for par after hitting into the water at the third hole. “That’s the longest putt I’ve made in my career,” Stenson said. “First of all, it’s hard to get a putt that long on any green in the world—maybe St. Andrews on a double green, you can find one.”