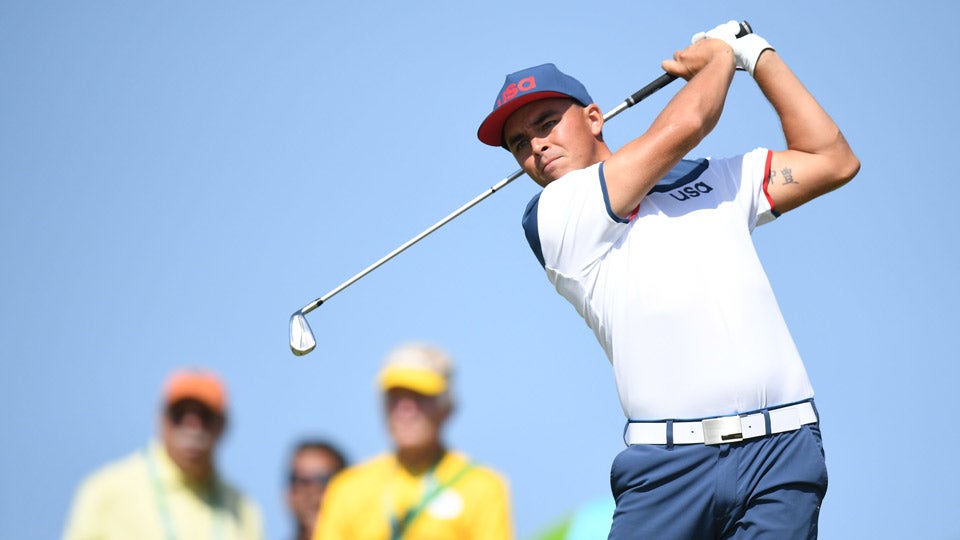 Rickie Fowler during the third round of the 2016 Olympic Golf tournament.
Getty Images

RIO DE JANEIRO — For his next trick, Rickie Fowler will bring peace to the Middle East. Or perhaps he will disarm North Korea, or shutter Guantanamo Bay. Because for all of his golf accomplishments, it is clear that Fowler’s real gift is for international diplomacy.

At these Olympics he has been a one-man ambassador of good vibes, charming the larger sports world and helping to heal golf’s reputation one playful social media post at a time. From his garish America headwear to his omnipresence at other events, Fowler has been the smiling, appealing face of golf in Rio. If the Spieths and McIlroys of the world furthered the public perception of Tour pros as whiny, entitled point-missers by bailing on the Games, Fowler’s goodwill tour has mitigated at least some of the damage.

Should golf survive the IOC referendum in 2017 and remain an Olympic sport, Fowler will have played a key role, and everyone knows it. Ty Votaw is the PGA Tour vice president who spearheaded the effort to get golf back in the Games and last week all he could says was,”Thank goodness we have Rickie.”

Of course, the only thing that had been missing during Rickie’s excellent adventure in Rio was — ahem — good golf. He began his first round with a four-putt and it was easy to imagine his mind was still on Swedish swimmers or Brazilian beach volleyball players…or any of the thousands of other exotic creatures populating the Athletes Village, where Fowler has been posted up since his star turn in the Opening Ceremony. He went on to shoot an opening 75 that left him 56th in a 60-man field. Apparently saving Olympic golf is easier than saving par.

During the second round Fowler had in his gallery assorted movie stars and silver medalists (U.S. diver Sam Dorman) but he could do no better than an even-par 71. Still, Fowler remained upbeat. “I feel like I’m close to playing some really great golf,” he said. “I felt like I swung it really well at the PGA [Championship], and same thing here, didn’t really make putts to build up momentum or get into a good rhythm. It’s close.”

After various breakthroughs last season for Fowler the 2016 season has been an almighty struggle, and it’s telling that on Friday he committed to playing in next week’s Wyndham Championship, despite what is sure to be an emotional hangover from Rio. Fowler knows that he has been on the verge of playing his way off the Ryder Cup team and is heading to North Carolina to try to earn enough points to qualify or, failing that, impress U.S. captain Davis Love with the earnestness of the pursuit. “That’s the reason I’m going there, to show the commitment to the Ryder Cup and how much it means to me,” Fowler said.

Well, hopefully Cap. Love turned on his TV early on Saturday morning because Fowler reminded Rio that his game can be as good as his attitude. He birdied four of the first eight holes and then on the par-4 ninth, holed-out a wedge from 73 yards for an eagle.

Add it up and Fowler torched the front nine in 29 strokes, and then he birdied number 10 to start the first 59 watch in Olympic history. With a freshening wind he bogeyed 14 and 15 but rallied to birdie the final two holes, finishing off a 64 that is the second lowest score of the week. Fowler walked off the course at three under par, in 16th place, seven strokes off the lead and promptly coined a new term: backdoor medal. That’s the goal for Sunday, to produce another low round that at least gives him a shot at the podium.

But even if Rickie leaves without a new necklace, he’ll take home (and no doubt has already Snapped) plenty of lasting memories, not least standing poolside while the U.S. swim team chanted his name. Meanwhile, he will continue his efforts to recruit a stronger field for the 2020 Olympics. As he said earlier in the week, “As far as making guys jealous back home or wherever they might be, I feel like I’m doing a pretty good job of it.”

All credit to whomever shoots the lowest score, but Fowler deserves a special medal of recognition, because no one in Rio has done more to champion their sport.