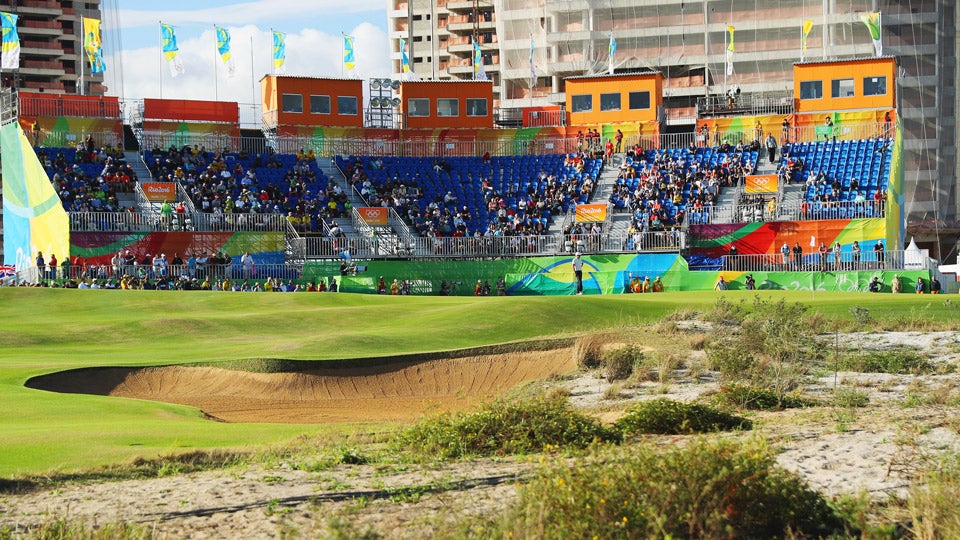 The scene at the 18th green during round 1 of the Olympic Golf event in Rio.
Getty Images

RIO DE JANEIRO — The Olympic golf experiment, er, tournament finally began on Thursday and, as expected, it felt different from anything else the game knows. The pomp began with the first tee shot, struck at 7:30 a.m. local time by native son Adilson da Silva. With the first tee surrounded by golf dignitaries, curious onlookers and bleary-eyed reporters, da Silva smashed one down the middle, ushering in a new era for the sport. He was the right man at the right time. “Many hardships, many setbacks, much joy,” da Silva said of his golfing life, but he could easily have been describing golf’s return to the Games after a 112-year absence. The son of a carpenter and chambermaid, da Silva learned the game as a caddie, dropped out of school at 13 to help support his family and left his homeland at 17 to pursue his golf dreams. He was greeted with shrill cheers every step of the way during his one-over-par 72, and was so moved by the experience that a half hour after the round ended da Silva was still leaking tears.

Even the most seasoned player in the field felt the magnitude of the moment. Padraig Harrington is a three-time major winner who will one day be enshrined in the Hall of Fame, but he said after his opening 70 that he was as nervous on the first tee “as I would have been when I played my first major… There was a feeling of trepidation, a feeling of joy after hitting the first shot. I’m an Olympic athlete now forever. Every [other] week we play, 156 guys tee it up, there’s 155 losers. This week, 60 guys tee it up, we’re all winners.” Of course, only three players will end the week with some shiny hardware around their necks. Graham DeLaet threw down the gauntlet early, shooting a 65 playing alongside da Silva. It was a fellow Canadian, George Lyon, who won the last Olympic gold medal in 1904, leading DeLaet to joke that he was the de facto defending champ. He has been dreaming about a medal of his own since early in the week when he crossed paths with Canada’s women’s rugby team as the players were parading around with their bronze medals.

“That’s when it really kind of became real to me how amazing it would be to get that chunk of metal,” DeLaet said. “Obviously gold would be incredible, but I think bringing home anything would be really, really special.” The Canadian is considered one of the game’s preeminent ballstrikers, but his putter was so hot on Thursday that at one point he turned to his caddie and said, “I feel like Jordan Spieth with this thing in my hand right now.”

SCORES: Full Results from Round 1 at the Rio Olympics

It’s the other scoring clubs that have been more problematic; this summer DeLaet developed a nasty case of the chip-yips, forcing him to take a sabbatical to deal with what he forthrightly called the “anxiety.” This coincided nicely with the arrival of twins, so DeLaet retreated to the comforts of home. It was, he says, “A little bit of a break for my brain and just [time] to regroup.” He is still, he admits, “battling through it.” Given the tight lies and devilish collection areas around the sloping greens, it will be a heckuva battle over the next three days.

DeLaet’s course record lasted for barely half an hour as Australia’s Marcus Fraser roared in with a 63 three groups behind him, built largely on five birdies in the first six holes. Like many courses near the sea, the Olympic track tends to get windier as the day wears on, and no one threatened Fraser’s lead in the afternoon zephyrs, though Henrik Stenson, teeing off last at 11:09 a.m., might have shot the day’s most impressive round with a 66 that left him tied for second with DeLaet. “I think this is probably one of the best rounds of golf I’ve ever played,” said Fraser, 38, a three-time winner on the European tour. “I think given the circumstances, I was quite edgy and a bit jumpy on the first tee, because it’s such a big occasion to be here at the Olympics. To manage that and go on to play the way I did is really pleasing and a big confidence boost.”

Fraser had been struggling in his first practice rounds but was straightened out by the Australian golf minder Ian Baker-Finch; this team support is yet another way these Olympics are different from the typical dog-eat-dog world of touring golf. “It’s been great being able to talk to Ian all week about different things, the experiences that he had been through in his career and trying to pluck as much information out of him as I can,” Fraser said. “Ian was always an idol of mine growing up.”

Fraser will need every little edge to hold off Stenson, who is still flying high from his record performance at the Open Championship. Of his 66, the Swede said, “Tough day, gusty, strong winds. I played a very solid round of golf. Yeah, I’m just happy with the start.” The rest of the field should consider themselves forewarned.

Among those tied for fourth, one shot behind Stenson, are Justin Rose and Rafael Cabrera-Bello. Martin Kaymer, Sergio Garcia and Matt Kuchar are in 11th place with 69s. Beyond Kuch, the other Americans struggled mightily. Rickie Fowler four-putted the first green and never really recovered, shooting a 75 to sit 56th in a 60-man field. (There is no cut.) Patrick Reed posted a 72, one stroke better than Bubba Watson, who actually salvaged his day a bit by birdieing two of the final four holes. Afterward he was surprisingly chipper, calling the Olympic track “the best conditioned course we’ve played all year” and likening the atmosphere to a Ryder Cup.

In fact, the announced attendance was a respectable 3,239 but it was a particularly boisterous, fun-loving crew. Numerous fans were draped in full-sized flags and other forms of patriotic plumage, with each of the 32 countries in the field seemingly represented by an old lady wearing a hat with the sequined flag of her homeland. When France’s Gregory Bourdy rolled in a birdie putt on the 18th hole, capping a stylish 67, the large grandstand surrounding the green exploded with “Allez les Bleus!” Said Bourdy, “That kind of surprised me it was so loud.” He added, “I saw more French flags today than I see at the French Open!”

As the most high-profile Latin American golfer in the field, Venezuela’s Jhonnattan Vegas has been particularly invested in the success of this Olympics. Following his 72 he said, “Honestly, I’m really surprised. I thought maybe no one would care or no one would show up. But the support for each country was phenomenal. It was a really unique atmosphere out there, with all the different languages, all the different colors. And you know what, word is going to spread that, hey, it’s a beautiful place, you can stand right next to players, it’s a fun time. I’m looking forward to some futbol chants, maybe a little craziness. Right? How fun will that be?”

Craziness has never really been synonymous with golf. But after such a lively opening day, suddenly anything seems possible as golf finds its identity at these Olympics.