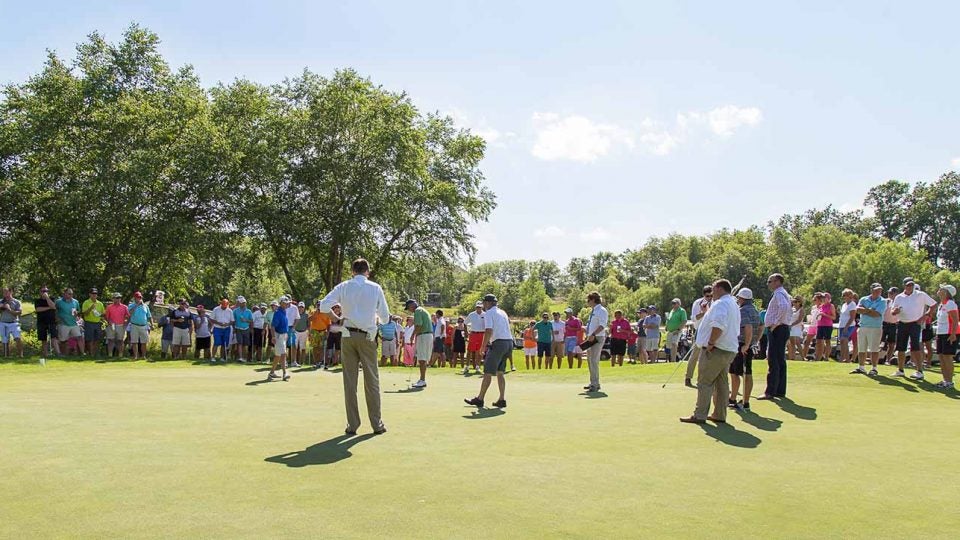 The best golf shot I witnessed last weekend wasn’t struck by Brooks Koepka or Justin Thomas or Rickie Fowler. It was executed 498 miles south of Erin Hills, at the Stampede, a rollicking member-guest at the Club at Old Hawthorne in Columbia, Mo.

Vance Allison, an amiable 57-year-old 5-handicap who tees it up more times in a month than most of us do in a year, faced the impossible: a downhill, side-hill, 90-foot birdie chip, with his ball nestled so deep in the Bluegrass rough that one of his opponents almost stepped on it, to a green that had been cut and rolled a couple of hours earlier and was Stimping at more than 11. The shot required playing a good 10 feet of break, and any ball that rolled more than five feet past the cup was doomed to scoot down a precipitous slope to a lower tier. His opponents in the alternate-shot format, the father-son team of Kerry and Jason McCartney, stood on the front collar, lining up their birdie putt.

Allison tested the rough with a couple of practice swats and then sent a low, skidding shot well left of the pin. A crowd of more than 100 urged on the ball as it rolled off a slope, and the cheers built to a crescendo as the Pro V1 trickled ever closer to the hole. Then the ball disappeared, dropping in the cup so delicately that it barely kissed the flagstick. Before Kerry McCartney had a chance to putt, players and their wives stormed the green, exchanging hugs and high-fives with Allison and partner Ed Cox. (Think Justin Leonard at the 1999 Ryder Cup.)

After the green cleared, McCartney missed his long birdie attempt, and Allison and Cox were crowned as Stampede champions for the second consecutive year. “You could give a Tour player 100 balls,” assistant pro Tommy Thrash said later on Saturday, “and he wouldn’t make that chip.”

You would also be hard-pressed to find a better tournament than the Stampede. Old Hawthorne didn’t open until 2007, but general manager Travis McCubbin and head professional Kevin Stull have this whole member-guest thing figured out. How good is it? For several years, 48 teams competed in eight flights, but due to popular demand, the field was expanded to 60. A few years back, when online registration opened on a Saturday night in April, the field filled up in two minutes and within five minutes there were 18 teams on the waiting list. As a result, a points system was implemented to reward members who use the club the most. (Still, this year the field grew to 72.) I’m happy to report that Pat Neylon, my best friend going back to our college days at Missouri in the 1970s, plays about as much golf as Allison. Every April, I anxiously await the text from Neys: “We’re in!” I’m lucky to have been invited each of the past seven years.

So, what makes the Stampede can’t-miss? In a word: Everything. Masseuses man the range on Friday and Saturday morning for players who need a quick rubdown, and spotters track wayward tee shots on no fewer than seven holes. The camaraderie is unmatched. The staff is ready to meet your every need, and although the competition can get heated over the course of playing five nine-hole matches in two days, the members couldn’t be more welcoming. I’ve come to know at least two dozen of them on a first-name basis. The perfectly manicured course is home to the Mizzou men’s and women’s teams and stout enough to have hosted an NCAA regional. From the Friday night Steak-Out to the closing party, the fare is five-star; scotch and cigar bars are part of the festivities, and live music, too. Tee gifts have ranged from carry bags with the Stampede logo to Scotty Cameron putters.

Amid all the decadence, no one loses sight of the ultimate goal: having your name engraved on Old Billy, the trophy that honors the club’s delightful owner. A national champion as a cutting-horse rider, Billy Sapp hadn’t picked up a golf club before he turned his horse farm into a 631-acre development a decade ago. The residence on the property, built in 1938 as a replica of President Andrew Jackson’s home, was expanded and turned into a 30,000-square-foot clubhouse. Perched atop a hill, it offers spectacular sunsets and sprawling views of the course below. These days, Sapp, 71, sports a 9.8 index and shiny set of PXG clubs. On many Friday nights he and his charming wife, Glenda, can be found breaking bread with members in one of the small dining rooms. If you didn’t know better, you’d swear that the Sapps were just another dues-paying couple.

Like Neys, Allison has been a member of Old Hawthorne since it opened. The two play a lot of golf together, so it’s no surprise that it has become a Stampede tradition for our teams to pair up for the Thursday practice round. Allison likes to complain a lot about the state of his game—when he saw who was in his flight this year, he announced that he and Cox, a strong stick in his own right, would be lucky to collect a single point over the 45 holes of competition. (The format is better-ball, and 10 points are at stake in each match. Each hole is worth a point—halves are common—with a point going to the winner of the match.)

We were subjected to more grousing on Thursday (“Another double!”), yet by the end of play on Friday, the defending champs had built a 1 1/2-point lead. However, after collecting only 3 1/2 points in their final match, Allison and Cox sat slumped in their cart, resigned to the real possibility they had thrown away the flight, so much so that they had already loaded their clubs in the trunk of their car. Then, boom! A 30-foot birdie putt on the final hole of another match gave them the half-point cushion they needed. Back to the parking lot. Back in the shootout.

Allison-Cox made a routine par on the first hole, survived a chip-off at the second and got into the finale with the McCartneys when the other remaining team conceded after making a mess of the third hole. The two survivors both bogeyed the devilish 18th the first time around, necessitating a return to the tee. McCubbin was posting live on Facebook. (Note to Travis: Let’s work on the video quality for 2018.) As the quartet was making its way to the green, he said, “No bad winners in this. Hopefully, somebody can do something good and lay claim to it.”

And then Allison did. Ryan Euliss and Roger Clark had been the only two-time winners of the Stampede, and Euliss has never been shy about reminding anyone and everyone as much. Now he has company on Old Billy. Not far from where Allison had holed the chip shot, Layton Euliss told her father, “Vance has won it back-to-back. That trumps you.”

Trumped indeed. By a shot that will live forever in Stampede lore.

Mark Godich spent 22 years as a senior editor at Sports Illustrated. He is the author of the college football book Tigers vs. Jayhawks: From the Civil War to the Battle for No. 1.