In a wide-ranging conference call Tuesday afternoon, new Augusta National and Masters chairman Fred Ridley discussed what may change—and what likely won’t—during his time in charge.

In his opening statement, Ridley stressed his enthusiasm for his new position. “When I drove down Magnolia Lane yesterday as my first day as Chairman of the Club, I promise you that I did so with the same excitement and anticipation that I had over 41 years ago,” he said. Ridley first set foot on Augusta’s grounds as a 23-year-old after winning the U.S. Amateur.

As in his press release yesterday, Ridley remained effusive in his praise for his predecessor. “I have to say that Billy Payne is the greatest leader I have ever known, and I sincerely thank him for all he’s done to elevate Augusta National.”

While adhering to Augusta National’s tradition of saying a lot while revealing very little, the new chairman tackled a number of subjects during subsequent questions from media members.

On his own golf career:

Because he suspected from an early age that he was unlikely to play professionally, Ridley was enamored with Bobby Jones. “I had a particular interest in Jones, and actually more so about him as a man and a person…I think he was a great example for how one lives their life with integrity and character.”

Ridley insisted that he has never second-guessed his decision to remain an amateur. “I haven’t looked back,” he said, “and I have to tell you honestly that there’s really no amount of money that would make me feel any differently about that.”

On returning to the course’s original principles:

Ridley stressed the importance of remaining true to the founding vision of Clifford Roberts and Bobby Jones.

“You know, it’s like if you have a certain key in your golf swing and you’re having trouble, if you always go back to that key that made you successful, you’re probably going to do a pretty good job.

“So, I go back to, really, the relentless pursuit of perfection and the drive for constant improvement that Mr. Jones and Mr. Roberts, really, mandated. When you take that and apply that to where we are today, I assure you that there are many, many opportunities that we have, that Augusta National has today, to make this place even better.” On President Trump and his effect on golf’s public perception:

Ridley was, unsurprisingly, eager to steer clear of politics and even declined to mention Trump by name in talking about the current perception of the game.

“I would say that first, our President, whoever he or she may be, doesn’t have any impact on the success of the Masters Tournament or any other aspect of Augusta National, and certainly, the steps we take to grow the game that I’ve talked about have been independent of politics,” he said. “So I don’t know what else I can say about that.” 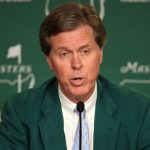 Once again, Ridley stressed the importance of Augusta’s original vision, emphasizing the “fundamentals” of designers Jones and Alister Mackenzie and their desire that “strategy and skill” be equal components in how the golf course should be played. He expanded on the idea that Augusta is considering changes to the golf course, but declined to get into specifics:

“What I think we should do, and what we have done over the years, is to go back to that philosophy and think about what do we need to do to make sure that we are true to the principles that Jones and MacKenzie established at the beginning.

“Now, Augusta National has changed many times over the years, and history has chronicled that. I think some of the most significant changes occurred back in the late 1990s, early 2000s under Hootie Johnson’s Chairmanship, and I think that time has a proved that those were very wise decisions.

“So, we do have some opportunities and some things we need to look at, and you know, you mentioned one of them. We haven’t made any decisions by any means, and I don’t know what those decisions are going to be right now. But I will tell you that we will take whatever action, whatever course of action is necessary to protect the integrity of Augusta National golf course.”