Natalie Gulbis: Bond Between Players, Caddies Unlike Anything Else in Golf 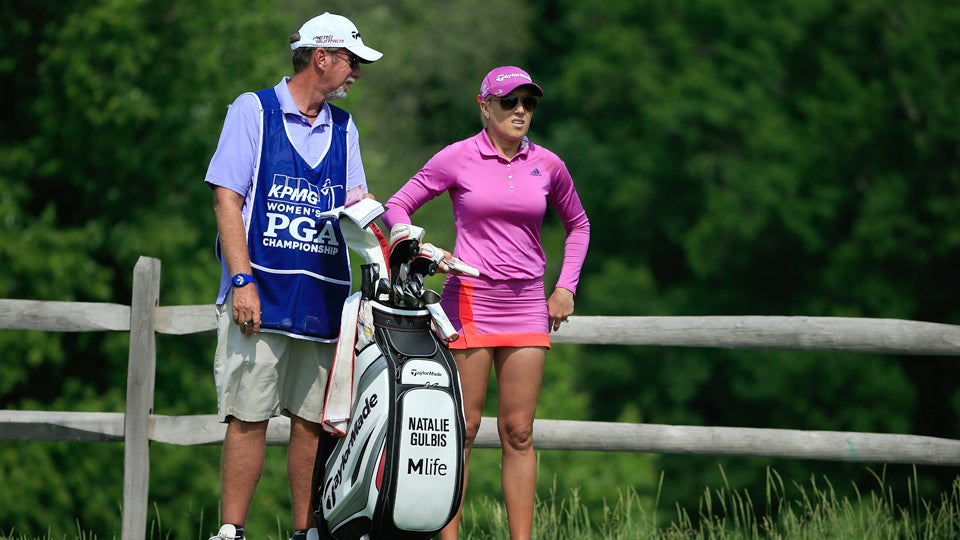 Natalie Gulbis stands with her caddie Greg Sheridan on the sixth tee box during the second round of the KPMG Women's PGA Championship held at Westchester Country Club on June 12, 2015, in Harrison, New York.
Getty Images

When I first turned pro at age 18, I had no idea how to find a caddie, so my manager and friend Randy Ramirez carried my bag. I quickly realized that a professional looper would be better for my career. But what to do? All of the caddies seemed nice, but I had no idea who was available.

Soon I settled on a local pro from Sacramento. A few weeks later I was leading an event for the first time in my career — until I snap-hooked a drive. My caddie wandered down the bank to see if it the ball stayed dry, but he lost his footing and took a wild tumble into the pond.

He continued to lug my bag while soaked to the skin, and a new nickname was born: “Splash.” We didn’t win, but we had a story to tell.

But things evolve, and six months later Splash and I had a falling out. We got into an argument about how to play a par 5 – I’ll admit that I was a hothead early in my career – and I ended up firing him on the spot. He tossed my bag upside down and stormed off. I hired a local and finished fourth. I went through a couple more caddies before finally winning the looper lottery by hiring Greg Sheridan in 2004, who had won 39 titles while caddying for Beth Daniel and Kathy Whitworth.

Greg now has 40 titles. Yes, I’ve slowed down his winning rate, but we’re having a wonderful run. We must be in the top five-longest of all caddy-player relationships – this is our 12th year together.

It’s often said that to be a great caddie you have to do three things: show up, keep up and shut up. In 11 years, I’ve missed my share of time with illness or injury, but Greg has yet to skip a single day. He is 30 years older than me, but walks just as fast as I do. And I disagree on that third point. – I like to keep a conversation going throughout the round. The last thing I want after making a bogey is the silent treatment.

GULBIS: How Golf Can Fix Its Slow-Play Problem

How do we make it work? He’s incredibly positive, and he’s quick to take ownership of any mistakes. So am I. (The years on Tour have mellowed my temper…at least a little) For 11 years I’ve made Greg a peanut butter and jelly sandwich every day. It’s the only thing he’s eaten on the golf course. That might sound like a good nickname for him, but that’s the number one food on our Tour — everyone devours them.  Greg brings me gum – Orbit sweet mint. It’s not a superstition, but I like it.

Some players carry a mini-convenience store in their bag, but we only pack what’s necessary for that day. As research for this column, I weighed my bag and found that it tips the scales at 41 pounds. That’s a lot to drag around for 6+ miles, sometimes at altitude. I don’t bring rain gear unless I need it. No novelty items. No snacks that won’t be eaten. The least I can do for Greg is keep the load to the bare minimum.

Greg and I have traveled the world, and today he is like family. Sometimes he’s a psychologist.  Last year my mom got sick and it was a distraction, but he was great. When I used to have boyfriend issues and breakup issues, he was my confidant.  In a world where caddies sometimes spill secrets, Greg has kept a respectful silence, and I can’t thank him enough for that. He’s an extension of me.

At a solid 6-foot-3, he’s also my bodyguard. We don’t have many security issues on tour, but about six years ago I was playing in Toledo and there was a problem. I saw Greg chatting with security between shots — I never want to know unless I need to know. So, we get to the seventh hole, and Greg says that we have an issue with someone, and he’s in our gallery. Sometimes you have to play through this stuff.

Soon we were stunned to see a guy sprinting across the fairway 20 yards in front of us. Two security guards were in hot pursuit. The guy hopped a fence, security hopped the fence, and they all disappeared. A few holes later I putted out and encountered a couple other guards, and I had to know. Turns out they chased the guy to a nearby little league field, where the wacko ran around the bases, slid into home, and was summarily arrested.

It all turned out fine. Thanks to Greg, I was never really worried.

Caddie payments are often a popular rumor, but I can probably clear most of it up right here. On our tour, a caddie receives 10% for a win, 7% for a top 10 and 5% for making the cut. I asked around, and believe most caddies make $1,500 per week as a base salary. (It seems to be about the same on the PGA Tour.)

If there are bonuses, it’s worked out individually, usually they are 1-3% based on the season. I also give Greg a few windfalls for exhibitions, Solheim Cups, practice sessions that he attends, and other things. I think I’ve been pretty good to him. He’s certainly been good to me.

I’ve also had a few other caddies here and there. I remember that the late Junior Seau once caddied for me as part of a TV show he was filming. He’s still the only celebrity caddie I’ve ever had.

My husband, Josh, has caddied for me twice. I’m pretty easy-going off the course, but I’m tough to work for. Once we were in Norway, and I was partnered with Lexi Thompson and facing Suzann Pettersen and Anna Nordqvist. Friends and family typically caddie this event, and Josh was on my bag. I birdied the first two holes and then three-putted the third. I slammed my putter against my bag and stormed to the next tee. Josh wandered over, saw that I was boiling, smiled and said, “I love you.” I didn’t even know how to react! I didn’t say anything. I was so ticked off. That was probably the safest thing he could say in that moment. I have to give him credit for handling that one so well. We’ve laughed about that moment at many dinner parties since then.

Today, when I get a pairing sheet, I check not only my playing partner but also the caddie. They can add so much to a long day on the course. (Remember, I despise slow play!)

* This column has been modified from its original version.