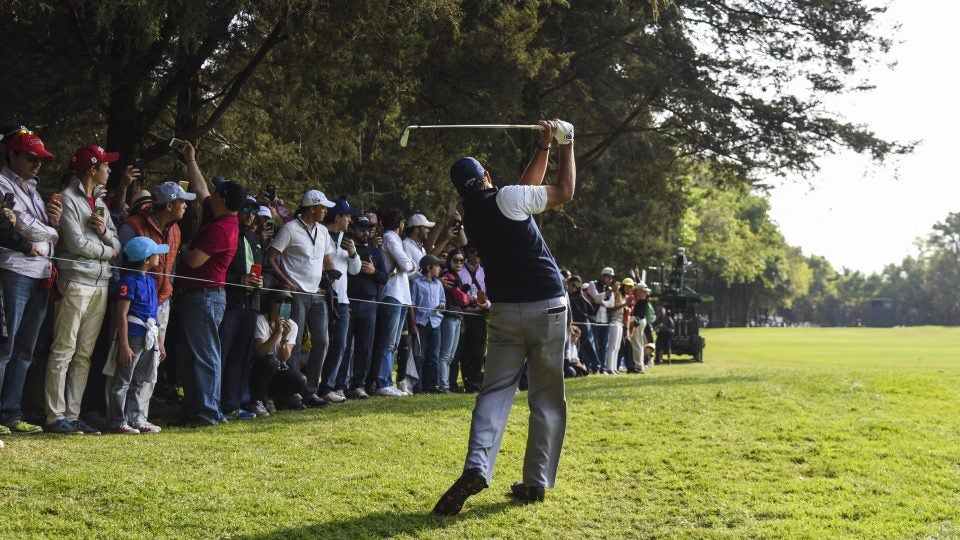 Phil Mickelson was one of several Tour pros who delivered some shotmaking magic to golf fans in Mexico City this weekend.
Getty Images

1. World No. 1 Dustin Johnson grabbed his fourth WGC victory in Mexico City on Sunday, becoming the second player to win an event the week following his ascent to the top of the world rankings (Adam Scott, 2014). D.J. and power are synonymous, but south of the border, his Strokes Gained: Driving tally was the weakest of his five “Strokes Gained” rankings, evidence that he’s eclipsed mere “bomb-and-gouge” status. Other than the moves often associated with his 120-mph swing—which most weekend players have no chance of working into their own motion—what are the other areas of D.J.’s game that can help mere mortals post lower scores?

Mark Durland, Durland Golf School at Naples Grande, Naples, Fla. (@durlandgolf): I like the stability Dustin creates in the bunker. It’s one of the reasons he’s rocketed to 18th in proximity to the hole from sand this season. He sets his feet outside and shoulders and bends deeply from his knees. This limits how much your lower body can move when you swing, creating a more consistent entry point. It’s that easy.

Martin Chuck, Raven G.C., Phoenix, Ariz. (@tourstriker): Dustin’s a bomber, but it’s his distance control with his short irons and intermediate wedges that has catapulted him to world No. 1. It’s not uncommon for D.J. to hit a shot and call out the exact yardage—plus or minus 1 yard—of where it eventually lands. He earned that mastery with hard work and excellent coaching. Tip: Focus on blending the rhythm of your arm swing with the rotation of your body. Think “pace and face.” In other words, once you commit an arm speed, prepare to “pace” that speed with your pivot and “face” the target in your finish.

Tim Cooke, Golf Learning Center at The Sea Pines Resort, Hilton Head Island, S.C. (@TimCookeGolf): Any golfer would be wise to emulate Johnson’s ability to accept what the course gives him and immediately shift into “recovery” mode once things don’t go his way. We saw it following the rules fiasco at the U.S. Open last June, and he’s only getting better. This mindset is a skill that can be developed similar to your full swing. When you find trouble, remind yourself that golf is a hard game, and that your good shots—not the poor ones—define you as a golfer. Drive O.B? Revel in the chance to pipe your next one straight down the fairway.

2. Justin Thomas, the hottest golfer on the planet not named Dustin Johnson, had a wild Sunday: five birdies and five bogeys or worse. Thomas has been quoted as not being afraid to tinker with his swing during the course of a round, and was spotted doing as much on Sunday. Advisable, or is it smarter to save swing fixes for the range?

Brady Riggs, Woodley Lakes G.C., Van Nuys, Calif. (@BradyRiggs): While it may be uncomfortable for many players, tinkering with his swing is rooted in the way Justin plays golf, and with three wins this year, you’d be crazy to tell him to stop. If you’re what I call a “practice player,” by no means change your M.O.—keep making in-round adjustments. Caveat: never try something on the course that you haven’t pulled off successfully in practice. That’s a sure-fire way to blow up both your scorecard and your psyche.

Tim Cooke: The word “tinkering” has always held negative connotations for me. If you must tinker, only attempt in-round corrections that lie within the framework of your game plan. For example, if you enter the round planning to hit fades off the tee, and suddenly those fades morph into slices, don’t start thinking, “draw.” It’s too big a leap. Ultimately, practice under the trained eye of a PGA professional will prove to be your most effective “fix.”

Martin Chuck: We’re all prone to tinkering—it’s a natural reaction to wanting to play our best. But instead of focusing on mechanics, use feels and images. When the sledding gets tough, reflect on past successes or memorable shots, then look for the intangibles that fueled them—a simple swing thought, your grip pressure, a song you had stuck in your head. As Gary Player once said, “Golf is a game you never own. You only rent it from time to time.” When you swing gets out of whack, think back to what surrounded those times when you truly “rented it.”

3. The greens at Club de Golf Chapultepec were small, but soft enough to create some serious backspin—we haven’t seen the ball back up like that in a while. Pros make spinning the ball back look easy, whereas weekend golfers are lucky to get it to even check. What’s the secret to pulling off the coolest shot in golf?

Mark Durland: For max backspin, make sure you have new, clean grooves as well as a high-spin, Tour-caliber ball. As far as your swing is concerned, it’s critical that you descend into impact. Try this: Lay an alignment stick on the ground on the opposite side of the ball. Set the stick where you normally position the ball in your stance. Take some practice swings. Your goal? Create a divot in on the target side of the stick, not behind it. Once you can do it with a practice swing, place a ball even with the alignment rod and do the same thing.

Martin Chuck: Weekend golfers love watching the pros spin the ball back. The players? I’m not so sure. As Sam Snead once quipped, “I’ve never made any money when a golf ball comes back toward me.” That said, generating enough spin to keep the ball from hitting and then rolling off the back of the green can be a boon for your game. Make sure that your weight is rotating and relocating onto your lead foot on your downswing. That will help you get your hands ahead of the ball as you strike the ball, creating the ball-first-turf-second contact that maximizes backspin.

Brady Riggs: The poa annua greens in Mexico were perfect for spinning the ball back: soft and primarily sloping back to front. Regardless, it takes significant clubhead speed to get the ball to moonwalk. If you don’t have it, no sweat. It’s not a critical skill, and as Martin suggested, can do more damage than good. Hey, Tom Kite, one of the best wedge players who ever lived, hated to spin the ball on the greens, because he found it impossible to gauge how far it was going to back up. It’s much easier to hone in on a yardage, pick a landing spot, and then stop the ball in its tracks.