Every Monday, we tap GOLF’s Top 100 Teachers in America for their insights on what went down between the ropes over the weekend on the major tours. Today, we sit down with Mark Blackburn, the coach behind Kevin Chappell’s breakthrough win at the 2017 Valero Texas Open. Blackburn has worked with Chappell since the 2012 U.S. Open. Together they’ve racked up six second-place finishes in addition to the victory in San Antonio, Kevin’s first. Pay attention—here’s how to use a Tour player’s big moment to generate your own.

1. You’re known to work with Chappell the Monday through Wednesday at the event he’s entered. What constitutes the bulk of your prep?

Mark Blackburn, Blackburn Golf at Greystone Golf & C.C., Birmingham, Ala. (@BlackburnGolf): We keep a pretty consistent schedule. Monday afternoon is when we look at Kevin’s full swing at the range, ending the session with distance wedges. We’ll head out to the course for a practice round on Tuesday, followed by some short game and putting drills. After the Wednesday pro-am, it’s more putting and distance wedges. The on-course time is critical. That’s when we look for shots that will make a difference—specialty swings to work the ball correctly depending on the course and the conditions.

2. Was there a specialty shot that made a difference in Texas?

Blackburn: Absolutely. It’s always windy at TPC San Antonio, so Kevin worked on his stinger off the tee. He hits it with his 3-wood using a low, abbreviated swing. Technique-wise, it’s pretty simple: play the ball back in your stance, cut your backswing at, say, three-quarters, and “cover” the ball at impact by swinging down and slightly to the left while holding off the release of the clubhead. Kevin’s key is to match how much he hits down on the ball with how much he swings to the left through impact. If he swings a little more left than he does down, the face hangs slightly open to the path for a reliable—and long—stinger fade. 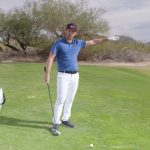 You may also like Kevin Chappell: How to hit the 3-wood stinger
​

3. In addition to Kevin, you work with other Tour players, notably Chez Reavie and Harris English. What’s it like juggling three players when they’re all entered in the same tournament?

Blackburn: There’s a lot of camaraderie among the guys I help. Each player is great about letting those who need more time get it. Plus, some players like to work early and others prefer the afternoon. With a little planning, everyone receives enough attention.

4. Going into this week, did you notice something in Chappell’s game that made you think, “This could be it?”

Blackburn: Kevin played well at Bay Hill and finished tied for 7th at the Masters. Those are two very difficult courses, as everyone knows. TPC San Antonio also plays extremely tough. Chappell has a knack for doing well on hard tracks and in less-than-ideal conditions. So, yes, we thought he could make a run. We’re big believers in the “horses-for-courses” adage. Some venues just suit Kevin better than others. If it’s one that demands ball control over birdie-bingeing, then you can expect Kevin to do well.

5. But before the Masters, his best finish in a regular Tour event this season was 35th—something had to have happened, no?

Blackburn: We did a lot of equipment testing in the off-season, and put some new gear in his bag following Nike’s decision to stop manufacturing equipment. Looking back, the addition of these new variables may have been too much to handle at all once, considering the other changes we made to his motion over the winter. So at Bay Hill, we got rid of the variables, putting his old Nike golf balls and irons back in his bag. There’s a limit to how many adjustments a player can digest.

6. Watching Kevin over the weekend, what jumped out to you the most about his game?

Blackburn: In heated moments, Kevin kept his cool. Specifically, he kept his tempo. He played the back nine on Saturday in 3-under, despite swirling winds. The temptation is to swing faster when the breeze is blowing. Big mistake. Kevin never changed speeds, and raced to the 54-hole lead.

7. Chappell left himself an 8-footer for birdie on the 72nd hole to one-up Brooks Koepka to claim his first victory in 180 starts. Talk about pressure! What were you feeling as you watched the drama unfold.

Blackburn: I really did believe he’d make the putt. Chappell’s tough—physically and mentally. We go over pressure situations all the time, and how important it is to lean on routine, not the possible outcomes. Was he nervous? I’m sure, but instead of fearing nerves, Kevin has learned to embrace them. There are no magical cures for butterflies in the pit of your stomach. Accept the fact that you’re going to feel rushed and a little out of sync. Appreciate the situation—you’re nervous because you’ve played yourself into a position to win! Run through your pre-putt routine like it’s any other putt. Make practice strokes while looking at the hole, imagining the ball dropping into the cup. As you settle into your stance, take some deep breaths, making sure the putterface is pointed in the direction you want the ball to start. Basically, that’s all you can do. Not only does running your routine put you in the best position to make the putt, it takes your mind off the nerves that can potentially doom your stroke.