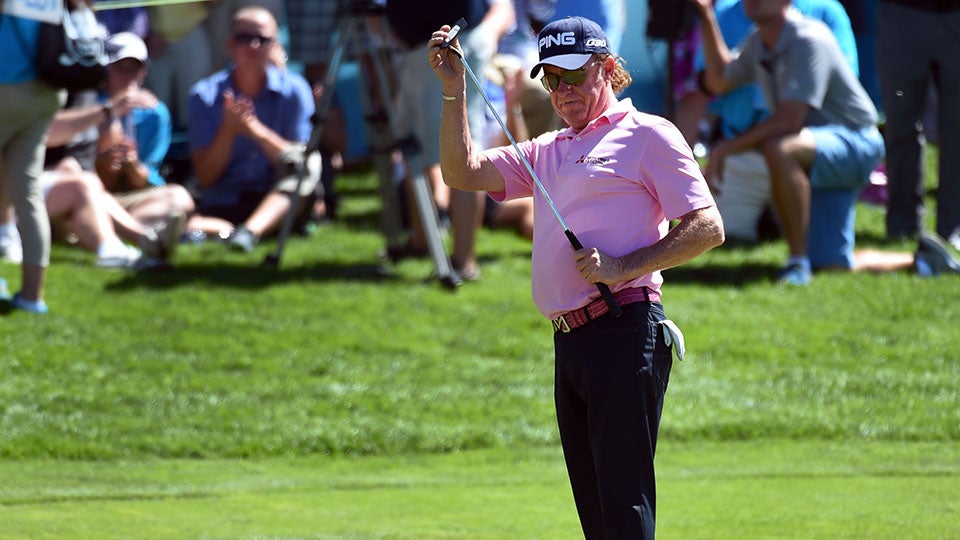 Miguel Angel Jimenez of Spain celebrates after sinking an eagle putt on 18 by putting his putter away like a sword during the second round of the Shaw Charity Classic at the Canyon Meadows Golf & Country Club on August 08, 2015 in Calgary, Canada. Jimenez
Getty Images

CALGARY, Alberta (AP) — Miguel Angel Jimenez eagled the par-5 18th hole Saturday to match the course record of 9-under 61 and tie Colin Montgomerie for the second-round lead in the Shaw Charity Classic.

Jimenez matched Fred Couples’ course record set last year. The 51-year-old Spanish player made seven birdies in a nine-hole stretch in the middle of the round.

Montgomerie, the first-round leader after a 62, birdied the 18th for a 66 to join Jimenez at 12-under 128 at Canyon Meadows. The Scot had an eagle, five birdies and three bogeys.

Jimenez won the season-opening Mitsubishi Electric Championship in Hawaii in January. He also won the Greater Gwinnett Championship last year in his first start on the Champions Tour.

Montgomerie successfully defended his title in the Senior PGA Championship in May for his third major victory on the 50-and-over tour.

Jeff Maggert, the Regions Tradition and U.S. Senior Open winner, was 10 under after a 63.

Defending champion Couples was tied for fourth at 8 under after a 65. Last year, Couples chipped in for eagle for a 61 in the final round, then beat Billy Andrade with a tap-in birdie on the first playoff hole.

Woody Austin also was 8 under after a 64.