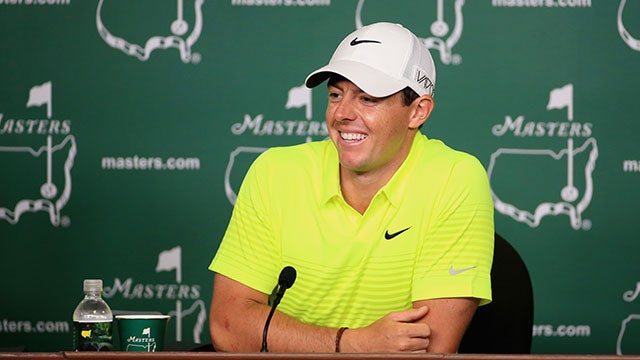 Rory McIlroy will have One Direction bandmember Niall Horan as his caddie during Wednesday's par-3 tournament.
Getty Images

AUGUSTA, Ga. — Tuesdays of Masters week are practices in chaos as a frantic pace of press conferences mesh with practice rounds to fill the day with action, even though the tournament is still more than 24 hours away.

This year was no different.

All the heavy hitters took the podium on Tuesday, and if you missed any of the news, we’ll fill you in.

Rory Has Unlocked The Secret To His Poor Masters Rounds Five years in a row, Rory McIlroy has finished Masters week with a round of 77 or worse. That’s not a winning formula at Augusta. McIlroy believes he’s found the cause of his inflated scores: trying to force birdies when a par will suffice.

“I think I’m more experienced now,” McIlroy said. “I had a run last year where I would throw in a bad nine holes and it was usually on a Friday. I think I’m better equipped now to handle if things don’t go quite the right way. Mentally, I feel like I’m in a far better place on the golf course and being able to handle adversity whenever it might come my way out there.”

McIlroy is the betting favorite, but when pressed on who he thinks will be the last man standing at Augusta, he thinks Bubba is the man to beat this week.

“He’s won here two of the last three years,” McIlroy said. “Perfect game for this course. Seems confident every time he tees it up. He’s been right up there his last few events. So if you’re looking at someone that will do well this week, I think Bubba is the main guy, not trying to put any pressure on him or anything.”

RELATED: A Masters Victory Is Not A Sure Thing For Rory

A Nike commercial debuted this weekend that showed how much McIlroy idolized Tiger Woods growing up. One way he’s not following in Woods’ footsteps? Focusing on the magic number of 18 majors.

“At the end of my career, I’ll add [up my major total] and see where it leaves me, and that’s the way I’m going to approach it,” McIlroy said.

Phil Mickelson Says The Big Hitters Have The Edge

Rains came pouring down on Tuesday at Augusta that will turn a soft golf course even softer. A soggy track would make length the key attribute, even moreso than it already is at a stretched-out Augusta National.

RELATED: All The Tee Times For Opening Two Rounds At Masters

“We’ve talked about it in the past, but the greens are very soft and receptive, and so the longer hitters are going to be able to reach the par 5s and get the ball stopped on the greens,” Mickelson said. “I think guys like Dustin and J.B. Holmes and Bubba Watson and Rory McIlroy, the usual suspects who really hit the ball long and far, have a distinct advantage coming into these greens.”

Mickelson averages 296 yards off the tee and is ranked 37th this season in driving distance.

“I’m going to be trying to swing as hard as I can,” Mickelson said, who will play his first two rounds with McIlroy. “I won’t be able to keep up with them, but hopefully I’ll be able to keep it in the same zip code and have short irons into greens so I can have opportunities at lots of birdies.”

Bubba Watson Needs To ‘Improve As A Man’

ESPN asked 103 PGA Tour players a series of questions, including who wouldn’t you help if you saw them in a parking lot fight. The majority of pros named the defending Masters champ.

“I take it as I need to improve as a man,” Watson said in his Tuesday press conference. “I take it with pride. I need to get better.  And I think over my career, since my rookie season to now, I’ve gotten better. But obviously there’s more room for me to improve as a man. And so hopefully next year or the year after, it improves. It’s a challenge. I’m glad that it came out and it’s going to help me improve. So if it’s a bad thing and people don’t like me, then I’ve got to improve and prove them wrong.”

On a happier note, Watson revealed the menu for his second Champions Dinner, and he’s sticking with what works. The two-time Masters champ will have the same dinner served in 2013: grilled chicken, macaroni and cheese, green beans, mashed potatoes and corn.

“It’s the same meal because it’s from my mom, homecooked meal and that’s why I do it,” Watson said.