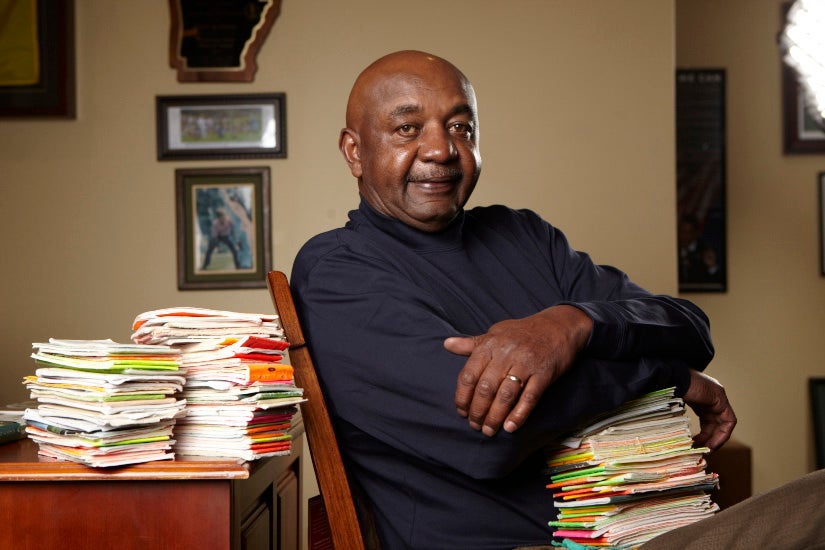 Carl Jackson at home with his yardage books.
Jeffery A. Salter/Sports Illustrated
Sore ribs kept longtime Augusta National caddie Carl Jackson, 67, from working with Ben Crenshaw during Thursday’s first round at the Masters, according to a Golf Channel report.

Jackson caddied for Crenshaw at Wednesday’s Par 3 Contest but called him Thursday morning to let the two-time Masters champion know he wouldn’t be able to work the bag. He was replaced by his brother, Bud.

This year’s Masters will be the last for the duo. It will be Jackson’s 54th and Crenshaw’s 44th trip to Augusta National.

Jackson joined Crenshaw in 1976. They won two Masters titles together, in 1984 and 1995. In 1995, after Crenshaw won the title, Jackson patted Crenshaw on the back, consoling him after the emotional victory in the wake of Crenshaw mentor Harvey Penick’s death. It was an endearing moment in Augusta history.

Crenshaw said earlier in the week at The Masters, that he was looking forward to have Jackson by his side.

“Carl means as much to what I’ve done here as me,” he said. “To go through this experience with Carl, he’s such a friend and helped me so much. I never could have done it without Carl. He’s such a special person in my life. We met each other on the prettiest place we know.”

Jackson told BBC Sports earlier this week,“My first time caddying at Augusta National was May 1960, when I was 13. All seven of my brothers caddied at one time or another. We played a lot of golf.

“When the time comes to say goodbye, I don’t know how I’m going to deal with,”  Jackson said. “I would love to get back in the heat one more time. I will miss the spirit of Augusta.”