Joe Buck, Brad Faxon and Greg Norman, Fox Sports TV Analysts, are seen on set during rehearsal prior to the start of the 115th U.S. Open Championship at Chambers Bay on June 17, 2015 in University Place, Washington.
David Cannon

Letting go of Greg Norman was no more than “changing some pieces around” for Fox Sports’ golf coverage coordinating producer Mark Loomis.

Speaking to Sports Illustrated’s Michael Bamberger at the PGA Show in Orlando, Fla., the Fox executive shared his thoughts on the high-profile firing of lead golf analyst Norman after just one year on the job — and the equally notable hiring of fellow broadcaster Paul Azinger to fill his shoes.

Loomis said Fox Sports is committed to improving its coverage of the U.S. Open and subsequent USGA tournaments in 2016 and 2017 after receiving heavy criticism after 2015’s debut. 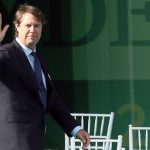 “When you think about a team, you get the best people you can get, you play a season, and you say ‘How do we get better?'” Loomis said. “We’ve made hundreds of changes people don’t know about, and what they do know is we changed Greg. It’s no more than changing some pieces around.”

Loomis was most disheartened to hear about the tone with which the Norman firing was being reported, and he said Norman was great to work with and a hard worker.

“He gave us a month of his life,” Loomis said of The Shark. “If anyone doesn’t have a month [to give] in his life, it’s Greg.”

RELATED: Fox Sports Gets a Mulligan By Hiring Paul Azinger

Instead, the embattled network will bring in Azinger, who has had years of experience broadcasting for both ABC and ESPN, along with a decorated history on the PGA Tour. And while vitally important, Loomis said Azinger’s experience is not the only reason Fox will be lucky to have him.

“[Azinger]’s an open book … probably gets him into trouble sometimes,” said Loomis. “He has this ‘no filter’ quality about him which is great for TV, and he’s a really thoughtful person. Very rarely do you ask him a question about golf or a situation in golf where he hasn’t thought about it. He is himself on TV, and that’s all you can ever ask.”

Azinger will broadcast all four USGA events — the U.S. Open at Oakmont, the U.S. Women’s Open at CordeValle, the U.S. Senior Open at Scioto and the U.S. Amateur at Oakland Hills — alongside Joe Buck in the booth. He will also provide commentary for the 2017 Walker Cup at the Los Angeles Country Club.