Marc Leishman opens with a 62 to lead BMW Championship 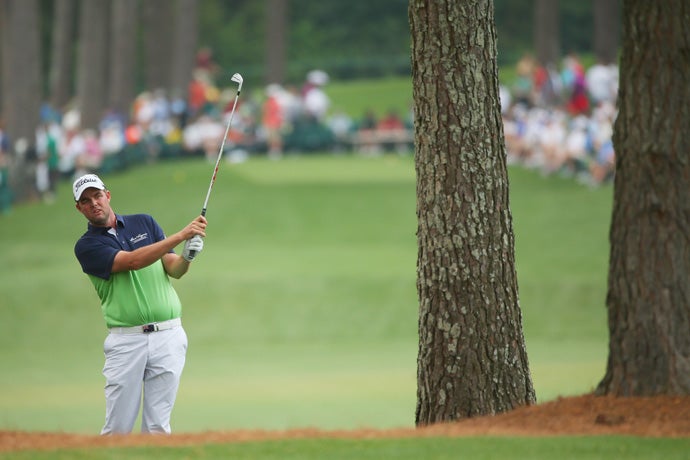 Marc Leishman is tied for the lead with Garcia.
Mike Ehrmann/Getty Images

LAKE FOREST, Ill. (AP) — Marc Leishman left his golf clubs in his garage during his week break from the FedEx Cup playoff and it didn’t change anything. He made 10 birdies in the opening round of the BMW Championship for a 9-under 62 to build a two-shot lead.

Jason Day made the biggest change of his career and had a 64, his best start in 16 months.

The race to the FedEx Cup finale got off to a blistering start Thursday at Conway Farms, and no one could top Leishman. The Australian finished third at the TPC Boston two weeks ago, did nothing last week except practice putting in the room above his garage, and then ran off seven birdies in a nine-hole stretch in the middle of his round and matched his best score on the PGA Tour.

“When you play golf and all you’re thinking about his making birdies, it’s a lot easier than trying to not make bogeys,” Leishman said.

Day made five birdies on the back nine to atone for a sluggish start in a tournament where his expectations were up in the air. He decided last week that Colin Swatton, the most meaningful figure in his golf career, would no longer caddie for at least the rest of the year. Day instead used an old roommate from his school days in Australia, Luke Reardon. If that wasn’t enough, he also changed putters.

That might not have been nearly as significant as the good vibes from a six-shot victory at Conway Farms two years ago. Whatever the case, he had no complaints about his lowest score since a 63 in the AT&T Byron Nelson in May, and his best opening round since a 63 at The Players Championship a year ago, which was the last tournament he won.

“A good step in the right direction, especially with having Luke on the bag,” Day said. “Obviously, not having Colin on the bag is something different and I just didn’t know how I was going to play. I think Luke did a fantastic job out there. We worked well together and hope we can keep that going.”

Charley Hoffman, picked for the Presidents Cup a week ago, birdied his last two holes for a 64. Jamie Lovemark also had a 64 with a little more style, drilling a fairway metal over the creek to 8 feet for eagle on the par-5 18th.

Jordan Spieth, a runner-up in the last two FedEx Cup playoff events to take over the No. 1 spot in the standings, turned a wild tee shot into a birdie on the opening hole, added a 30-foot birdie from off the green at No. 5 and settled down the rest of the way for a bogey-free 65.

“I felt like I really stole a few shots out of this golf course, which is rare to feel like you scored better than you played,” Spieth said.

Also at 65 was Rickie Flower, who showed a streaky side. Fowler birdied the first hole. He bogeyed the second hole. He followed with nine straight pars. And then he ran off six straight birdies, capped by a 65-foot pitch from short of the 17th green.

Fowler had a chance to match a career best with seven straight birdies, but he chose not to take on the stream at the par-5 18th and laid up. He hit wedge to 12 feet and missed the birdie putts, with no regrets.

This was only Thursday, and he saw no need in ruining a big finish with a shot he would have had to hit flush.

“Come Sunday, if I’m in good position, that will be a go, and see what happens,” he said.

Tony Finau, Keegan Bradley and Rafa Cabrera Bello also were at 65, while Phil Mickelson played bogey-free and opened with a 66.

The top 30 in the FedEx Cup after this week make it to the Tour Championship at East Lake for a mathematical shot at the $10 million bonus, with odds significantly higher depending on the position in the standings. The top five players – Spieth, Justin Thomas and Dustin Johnson already are assured that position – would only have to win at East Lake to claim golf’s richest prize.

Thomas hit a tee shot into the water on the par-3 11th and made double bogey, though he still shot 67. Johnson had a three-hole stretch at 4 over early in his round and recovered for a 71.

For players like Mickelson, Finau and Bradley, they need to play well over the next three days to get into the top 30.

Mickelson found something a few weeks ago, whether it was medication or his diet as it relates to psoriatic arthritis, but it has given him great clarity of the shots he sees and more energy to keep his mind from drifting. He tied for sixth two weeks ago outside Boston and was sharp again at Conway Farms.

Lefty already is assured of competing in his 23rd consecutive team competition as a captain’s pick for the Presidents Cup. Now he’d like to make it back to East Lake.