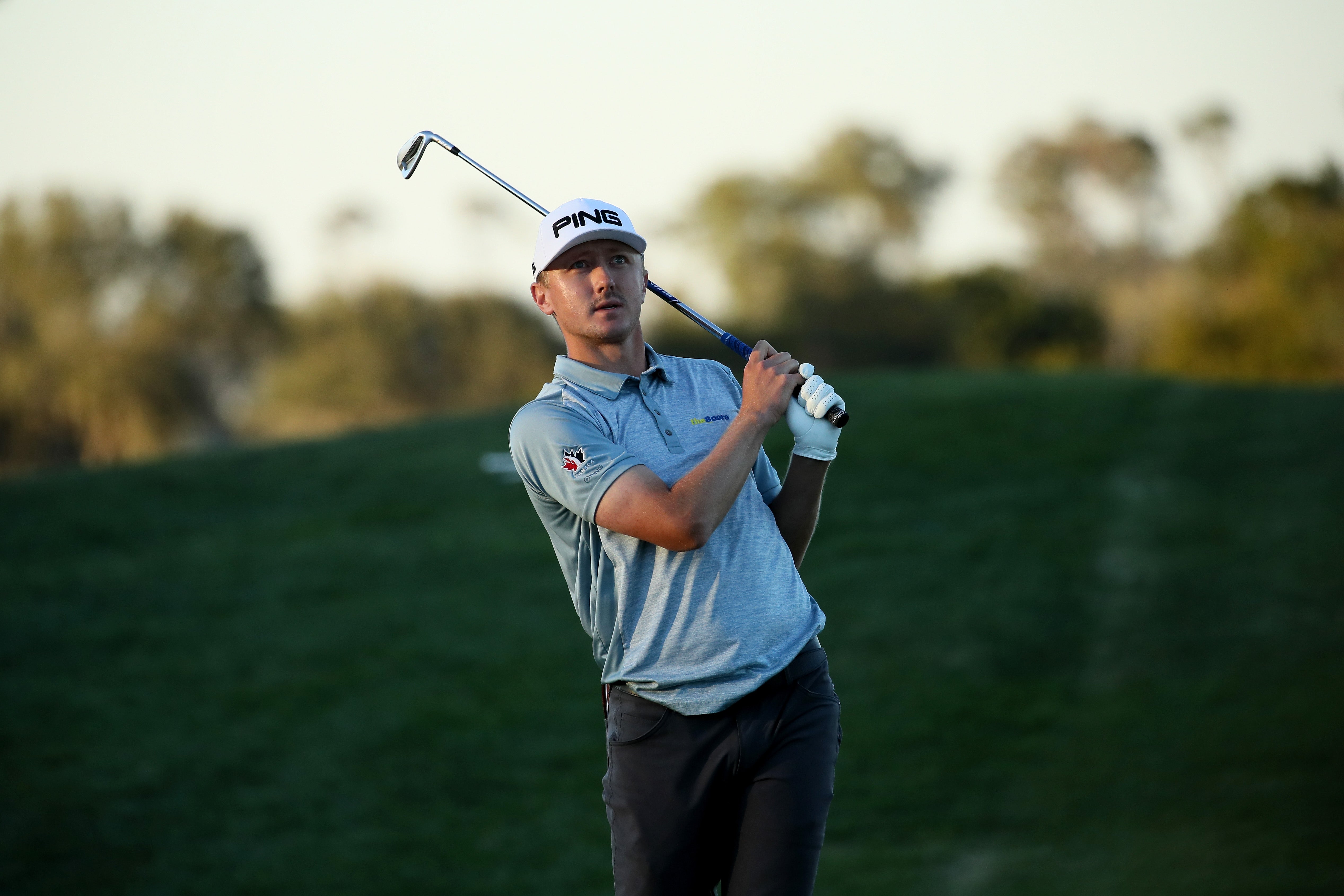 ST. SIMONS ISLAND, Ga. (AP) — Mackenzie Hughes holed an 18-foot par putt from off the green Monday morning to win the RSM Classic and become the first rookie in 20 years to go wire-to-wire for his first PGA Tour victory.

The Canadian calmed his nerves and came up clutch in the 42-degree chill at Sea Island. He was the only player of the four remaining in the playoff who was never on the green at the par-3 17th hole until his ball was in the cup.

“I made the putt of my life right there,” Hughes said.

All four players who had to return for the third extra playoff hole missed the green. Hughes was in the toughest spot with a pitch up the slope to a green that ran quickly away from him. It stopped a few feet short of the green and he figured he had to make it to stay in the playoff.

He poured it in for par, slamming his fist, more out of relief than celebration.

Then, he watched Blayne Barber, Henrik Norlander and Camilo Villegas each miss par putts from 10 feet or closer.

“As each guy went down, it was that much more real,” Hughes said.

Hughes was standing off the green when Villegas missed . He dropped the putter from his hand, knocked the cap off his head and rubbed his hand over his head in disbelief. The 25-year-old Canadian is headed to Hawaii a week earlier next year, and more important, he’s in the Masters.

Billy Horschel was eliminated from the five-man playoff on the first extra hole Sunday night when he narrowly missed a birdie putt, then shockingly missed a 2-foot putt. On the second playoff hole at the 18th, Hughes had a 10-foot putt for the win in the dark and didn’t see that it turned away slightly to the left.

He earned some redemption Monday morning, though it sure didn’t look that way when he didn’t reach the green with his pitch.

The last rookie to go wire-to-wire for his first win was Tim Herron at the 1996 Honda Classic when he opened with a 62 at TPC Eagle Trace. Hughes started this week with a 61, and he led after every round until he was posing with tournament host Davis Love III with the trophy.

Hughes, who closed with a 69 and finished at 17-under 265, capped a memorable fall season.

He began his rookie season by playing the final two rounds with Phil Mickelson, which helped him deal with the distractions of a large gallery. In his only week off, he and his longtime girlfriend from Kent State, Jenna, were married. They plan a honeymoon in the offseason, and now he gets to plan a schedule that includes Kapalua, Augusta National and the PGA Championship in Charlotte, North Carolina, where he lives.

Hughes earned $1.08 million and a two-year exemption on the PGA Tour. He was the second rookie to win during the fall start to the season. Cody Gribble won in Mississippi, though that was against a World Golf Championship event in China.

Villegas and Norlander do not have full PGA Tour cards, and a victory would have changed that. Villegas got into the field as a past champion, while Norlander has no PGA Tour status and received a sponsor’s exemption.

Villegas had made every big putt, from his birdies on the 16th and 17th in regulation to his 6-foot par putt on the 72nd hole to join the playoff, and another tough 4-foot putt in the dark Sunday night to stay alive. He missed from 7 feet Monday.

“I just pushed it a tiny bit,” Villegas. “But once again, I’m proud of myself. We want to win a golf tournament, so you go with a little bittersweet, but you’ve got to look at the positive and keep moving forward.”