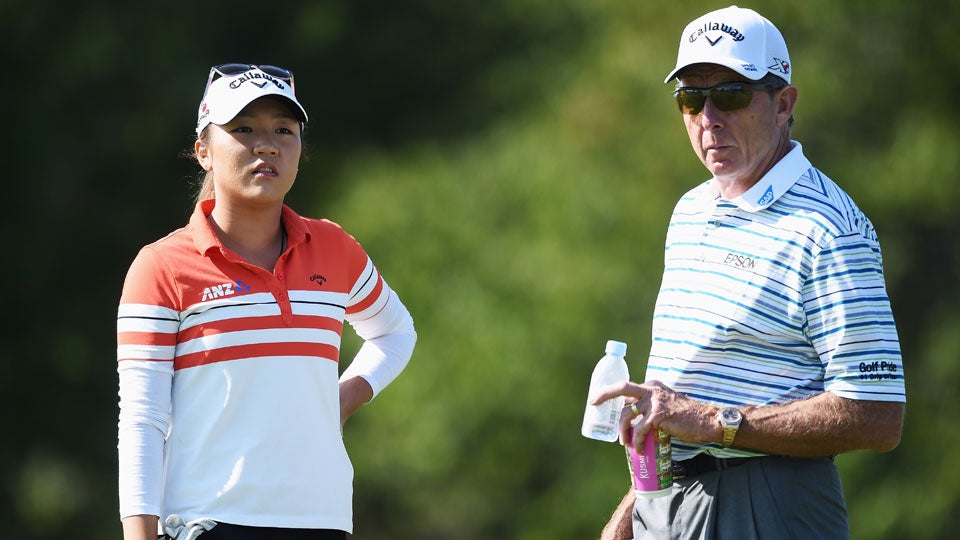 NAPLES, Fla. (AP) — Lydia Ko shot a tournament-record 10-under 62 on Friday to take a three-stroke lead in the CME Group Tour Championship, putting the top-ranked New Zealander in position to win the player of the year award with a victory Sunday.

Ko birdied four of the first six holes and had seven birdies and a bogey on the back nine to get to 12-under 132 in the season finale. Ryann O’Toole (67) and So Yeon Ryu (68) were tied for second, and Sei Young Kim (68) and Beatriz Recari (68) followed at 8 under.

“Going into today definitely my goal wasn’t the 62,” said Ko, the 2014 winner at Tiburon Golf Club. “The first three holes made great birdies. I was going in with really good momentum, and I was able to carry that for pretty much the rest of my round. I think I was putting good, so if I was within a distance that I felt comfortable I felt like, ‘Hey, I could hole this.'”

Ko needs a victory to top Ariya Jutanugarn in the player of the year race, and also would take the season points title and $1 million bonus with a win. The points in the CME Globe standings were reset for the finale, so Ko, Jutanugarn and Brooke Henderson all control their destinies.

“I think the big key mindset for me is that I’ve been not really thinking about everything that could happen,” Ko said. “For me to win player the year I know I need to win this championship. A lot of things come with that. So to me, it’s more important to finish off my season strong. I think that way I don’t feel more pressure about everything that’s going on.”

Ko is fighting Jutanugarn for the money title and In Gee Chun for the Vare Trophy for the lowest scoring average. Jutanugarn, the tour victory leader with five, was tied for 19th at 4 under after a 68.

“I started to make some putts,” Jutanugarn said. “Today was pretty good day for me.”

The 62 matched Ko’s lowest score of the season, shot in the second round of her Walmart NW Arkansas victory in June. She has four victories this year.

“Going into today, I just wanted to focus on my game,” Ko said. “I knew I had a great pairing Eun Hee (Ji) and Mi Hyang (Lee). Mi Hyang said, ‘Hey, whenever you play with us you seem to play well.’ Maybe it’s the good vibes I got from them. Obviously, it’s a great round. It’s a better position, even better than I could have imagined. Even on the weekend I just got to focus and keep playing great.”

Ko is using Gary Matthews as her caddie for the second straight event. She fired Jason Hamilton – now with Ha Na Jang – and used Sargunan Suntharaj in Malaysia, then teamed with Matthews in Japan.

She worked with instructor David Leadbetter on the range late Thursday.

“It was just more about my iron play,” Ko said. “I hit my drives really well yesterday. My irons were kind of on and off. Not that many where I was looking for birdies. So, it was just very simple. Just in the takeaway where I wasn’t going too out. It’s something that you normally do, but especially when you’re hitting it good, it’s more about the basics and the little things.”

O’Toole had six birdies and a bogey.

“I think usually my drives are my strong point,” O’Toole said. “Right now I’m hitting these little cuts that aren’t going as far as they could. Definitely could give me shorter irons in. But I’m striking my irons well, putting myself in position.”

Ryu earned a spot in the final group Saturday with friend Ko.

“It’s think it’s definitely going to be really fun to competing with world No. 1 player,” Ryu said. “She is not only great player, she’s really great person. … She loves food like me, so we just talk a lot of thing about food when we are on the golf course.”

First-round leader Shanshan Feng followed her opening 66 with a 73 to drop into a tie for 16th at 5 under. The Chinese star is coming off consecutive victories in Malaysia and Japan.