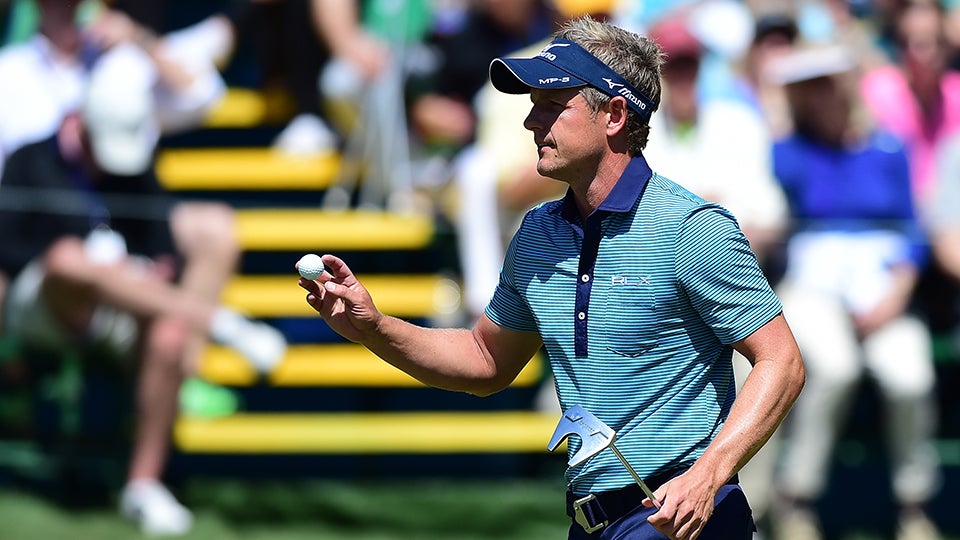 Luke Donald reacts after making his par putt on the sixth hole during the third round of the 2016 RBC Heritage at Harbour Town Golf Links.
Jared C. Tilton

HILTON HEAD ISLAND, S.C. (AP) Luke Donald shot a 2-under 69 on Saturday to take a one-stroke lead in the RBC Heritage on Saturday, while top-ranked Jason Day had a season-worst 79 to fall nine shots back with one round left.

Day, tied for the lead entering the round, has won two of his past three PGA Tour events and figured to contend at Harbour Town. Instead, the Australian made eight bogeys and a double bogey.

Jason Kokrak and Charley Hoffman were a stroke back. Kokrak shot a 68, and Hoffman bogeyed the closing lighthouse hole for a 71.

Now, Donald looks to end his hard-luck history at Harbour Town. The Englishman has five top-three finishes without a win.

Donald was a stroke behind when the round started and quickly moved up with three birdies on his first eight holes to reach 8 under. He bogeyed the 13th and trailed Hoffman by a shot. But Donald steadied his game with five straight pars over the windy back nine to get himself on top once more.

Donald has won more than $2.5 million at the RBC Heritage, the third-highest total. But he’s known as much for his disheartening defeats on Pete Dye’s tricky layout. Brandt Snedeker rallied from six shots behind Donald to force a playoff and win in 2011.

Three years later, Matt Kuchar’s chip in from a bunker in front of the 72nd hole capped a four-shot comeback and left Donald in second once more.

”I think it’s a bit dangerous to say a place owes you,” Donald said. ”Certainly, I’ve knocked on the door many times. I’d love to put that tartan jacket on tomorrow.”

One who figured to join the battle was Day, but his round went bad right from the start.

Tied for the top and playing in the final group, Day came up short of the first green and made bogey. Two holes later he drove into water way right of the third fairway for a double-bogey 6. The wheels came off for good during an awful stretch around the turn – Day made five bogeys in a six-hole span.

His 79 was his highest round of the year and his worst showing in 63 rounds since an 81 last year in the second round of The Players Championship.

Day attempted to take his poor play in stride, signing autographs for fans behind the 18th green. After winning the Arnold Palmer Invitational and The WCG-Dell Match Play, finishing 10th at the Masters, Day said several times this week he was ready for a break – which the PGA Championship winner will get next week.

Hoffman also has a score to settle with Harbour Town. He was the 54-hole leader here in 2013, yet ballooned to a 77 in the final round. He looked like he would hold the lead after moving to 8 under, one up on Donald, with a birdie on the 16th hole. Yes, he missed a 6-footer for par on No. 17 and a 17-foot putt from the back fringe on No. 18.

Divots: Jason Bohn continued his up-and-down play in his first tournament back since a heart attack in February. Bohn ballooned to a 4-over 75 on Saturday, a round that including back-to-back double bogeys. … Boeing, the presenting sponsor, showed off another of its 787 Dreamliners to the RBC Heritage crowd. The sleek aircraft glided along the 18th hole over Calibogue Sound before leaving. It’s the fourth time the company, the presenting sponsor of the tournament, has showcased its aircraft with a flyover. … Past RBC Heritage champion Carl Pettersson was among seven players who missed the cut after the third round.