SAN DIEGO, Calif. — It was a minor mistake with a major champion — a little funny and maybe a little understandable. When Lucas Glover was announced on the first tee Saturday at the Farmers Insurance Open, his last named was pronounced “Glow-ver” instead of Glover (like a glove).

The man did win a United States Open once and, as he said later, had eight or nine pretty good years on the PGA Tour. Then again, 2009 was six years ago.

Glover’s only win since that Open was the 2011 Wells Fargo Championship and you haven’t heard his name much in the three years since then. Still, being a major champion ought to earn you a pass from mispronunciations.

Glover, 35, and always among the smarter interviews in golf, thought it was all fairly amusing. The good news is, he’s back in the mix this week at the Farmers. Of course, an entire crop of players is in the mix at the Farmers. Half the field, practically. Check this out: Thirty players are within five shots of the 54-hole lead, which is shared by J.B. Holmes and second-round leader Harris English.

Glover is one shot back, along with Ryder Cupper Jimmy Walker, Spencer Levin, Chad Campbell and Nick Watney. Behind them, well, it’s a 20-car pileup. You need a guide and a program to handicap this horse race on Sunday.

Walker is a late bloomer who was among the few bright spots on last year’s U.S. Ryder Cup team. He won three times last season and his game travels pretty well — he’s long, pretty straight and he putts the lights out. Yeah, that works anywhere. So it’s not surprising that he’s frequently in contention.

“It took me until I was 34 to win,” said Walker, who played college golf at Baylor. “I’ve been out here a long time. I feel like I’ve been ready for this for a long time. I just hadn’t done it before. It’s very satisfying now. I’m healthy, where I really hadn’t been in the past. So yeah, it’s been fun to go out and play well. Anybody would say that. I’m not going to lie, it’s been fun, and I’m looking forward to tomorrow.”

Campbell lost a Masters playoff to Angel Cabrera, and it’s shocking to look at his bio and discover that he’s 40 years old. Wasn’t it just yesterday that he was voted by his peers in a magazine poll as the player most likely to win his first major soon? It didn’t happen and, in fact, he hasn’t won anything since the 2007 Viking Classic.

He moved up on the board with a strange round — he aced the scenic third hole, one of the prettiest par 3s in the world, with a pitching wedge — and didn’t manage a birdie until he scored a pair at 17 and 18.

“Any time you can make a birdie or an eagle out here on this course, it definitely helps,” said Campbell. “The rough is the worst I’ve ever seen it here so if you start missing fairways, it’s tough. It was great to finish up with a couple of birdies and get that momentum going. I feel good going into tomorrow.” 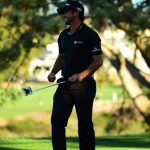 The final round is going to feel more like a Monday qualifier and a sprint to the finish than the closing round of a 72-hole event. Somebody is going to shoot a low score in that cast of pursuers, although the firm greens, tough pins and troublesome rough at the South Course are making it difficult.

Aussie Mark Leishman shot 66 to move up to a tie for 13th but 68, the scores shot by Holmes and defending champ Scott Stallings, also 13th, were really good too.

Glover has just as good a chance as anyone. Where’s he been, what happened to his game? He’s been hearing that for a while now.

In a nutshell, his putter went south and he’s only recently recovered it — well, he hopes he’s recovered it. Glover has putted very well this week, and that’s the big reason he’s in contention.

“If there was something to try, I probably tried it,” he said about his putting struggles.

It came to a head at the Humana Championship last month. His long-time caddie, Don Cooper, suggested going back to the form he had when he was playing well and won the ’09 Open. “Coop said, ‘Here’s what you used to do, let’s do that,’” Glover said. “He said, ‘We know it works. Let’s do that and stick with it.’”

“Coop said, ‘You’re a hitter, not a stroker,’” Glover added. “I’ve never had a flowy stroke. I was trying to roll the ball like Loren Roberts and that just wasn’t me. I’m a hitter, I’ve just got to be myself.”

It’s easy to forget how solid a player Glover was. After he won the Open, he was proud of the fact that he bounced back and played his way into contention at the PGA Championship two months later. From 2005 through 2010, Glover had two wins, one runner-up finish and 30 top-ten finishes.

Being an Open champion was never a burden, he said. He tries to use it to his advantage. “If I’ve got a tough 4-iron shot, I think about the 4-iron I hit at 17 at Bethpage,” Glover said.

When you look at players who are most likely to hold up in the final round, Glover has to be one of them just because of his experience.

Here are six players besides Glover to watch Sunday:

J.B. Holmes: He’s long, he piled up seven birdies on a tough scoring day in the third round and the South Course is a bit of a basher’s track. He’s tied for the lead so he doesn’t have to make up any ground.

Harris English: Another one of the many University of Georgia alums who’s impacting the tour. When he’s got his driver straightened out, he’s dangerous.

Jimmy Walker: He’s gotten used to winning and at No. 13 in the world, he’s the highest-ranked player in contention. If you had to pick one man on the board as the player to beat, it’s probably him.

Nick Watney: He was the rising young gun on the PGA Tour four years ago, then had a bit of a slump. He’s only one back, he’s a native Californian and is familiar with the grasses and the ocean breezes. He’s always been a very good iron player. Watney had a quiet round Saturday wit one bogey, one birdie, but if he can solve the South Course’s greens, he’s got a good chance.

Jason Day: The young Aussie is two shots back and is considered one of the world’s best players under the age of 30. He won the World Match Play title in impressive fashion and he’s made runs at the Masters and U.S. Open. Big things are expected of him, but he’s been delayed by a thumb injury. This could be the start of a big stretch for him.

Scott Stallings: The defending champ is a big hitter who excels on mid-iron shots. He wasn’t really in the picture until he shot 68 on Saturday, and that came with a bogey at the par-5 finishing hole. He is three shots back, but he’s already got a win on this track so he knows what he’s doing. Watch out for him, he’s underrated.