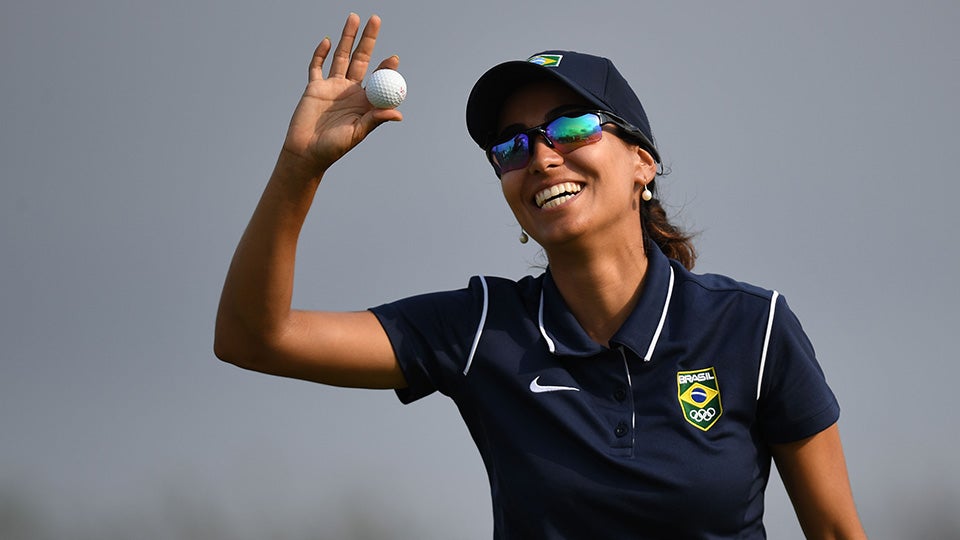 Ladies European Tour player Victoria Lovelady was one of the first Brazilian golfers to represent her country in golf’s return to the Olympic Games in Rio this year. We sat down with the LPGA hopeful to hear what she has to say about the future of the sport in her country, and why her favorite memory from Rio wasn’t necessarily what happened on the course.

What was it like being able to play the sport you love while representing your country, in your country, for the first time since 1900?

For me, it was a goal that I had for the past seven years. Right after I graduated college, it was something that was in my mind pretty much every day. I’m very, very blessed that I was able to live during this time in history when golf is coming back to the Olympics and to be able to play the Olympics in my home country. I grew up in Rio, so I spent a lot of my childhood there. After, I moved to San Paolo, but Rio is also a home for me. It is something that’s driven my career, I have improved because of this Olympic goal on the Ladies European Tour as well, and to be able to walk on the first tee, in my country…seeing the five rings of the Olympics, I had to really control myself not to start just bawling. To be received by my people and listen to Portuguese on the first tee — we don’t have professional events in Brazil, yet — so for me, it was just an amazing moment that I’m going to carry for the rest of my life.

Brazil isn’t a very big golf country. What got you involved in the game?

My dad. My dad has always been the sports leader in our family, and I’ve always been really attached to him. Every sport he did, I wanted to do. He played golf since he was a kid because of his grandpa, and when I was 12 he finally took me to watch him play and I said, ‘I want to do that too.’ From there, I just fell in love with the sport.

What will golf’s return to the Games, specifically in a country like Brazil, do for the sport?

The Olympic golf course is going to be the first public golf course in Brazil, so for the first time, people that walk by or people that live nearby are going to say, ‘Oh, there’s a golf course there,’ or ‘Oh, I can go in, I don’t need to be a member. I can try.’ My hope is that the organization that is in charge of the golf course can keep the price accessible for people in order for them to try out the sport, in order for them to develop new talents. Golf has never been talked about so much back home, and I’ve never been approached so much about golf. For the first time, golf is in that spotlight and people are going to be able to access it.

What are your professional goals after Rio?

Rio was a short term goal for me. My long term goal is to get onto the LPGA. It’s definitely where I want to be, where the best are and where I think I’m going to grow as a golfer the most. Hopefully in the next year, I’ll be there.

Your Instagram indicates you had a blast at the Games. Aside from playing, what was your favorite moment from the Olympics?

After that, we had to take a turn and then I hear someone calling my name. I’m like, ‘What?’ I turn, and it’s my dad. He didn’t even know he was going to be there — it was a last minute invitation. He was in the first row, so I was able to hug him, we were able to cry together. Because that moment summarized our investment in my career, and to be able to become and Olympian and live that moment with my dad…that was the most memorable experience I had.

You finished T53, 16-over. Nothing to slouch about! You had a slow play penalty on the second day. Can you tell me what happened there?

I took it. I did try to refute it, of course, you know we always do at the end [laughs]. But they were right. I took a long time in those two shots, I got a warning, and then I got the stroke penalty. I give them the credit to do so. But it was good because it made me just stop trying to be perfect and get everything checked out for the following day and say, ‘Come on Vic, just hit the ball,’ you know? So I was trying to do so well that I think I slowed down quite a bit, and it actually helped me for the following days. I entered as the 58th player, and I left as the 53rd, so that is an improvement for me. I got some points in the world rankings, so I definitely took that as a positive improvement.

You’ve been on the LET since 2014. What’s something you’d take away from your time as a professional golfer so far?

Golf has opened so many doors for me. To be able to come to the U.S., to be able to get a scholarship and play at USC, to meet my husband at USC, to turn pro and have that hope. And then to be able to travel the world doing what I love, competing, I think I couldn’t have asked for a better career and a better life, so I’m very thankful. The friends that you make, the people that you know, the experience that you have, traveling the world and playing golf…I think that’s irreplaceable. I’m very, very blessed that I’m able to do what I do.