LPGA Takeaway: For Brooke Henderson, Golf Is a Family Affair 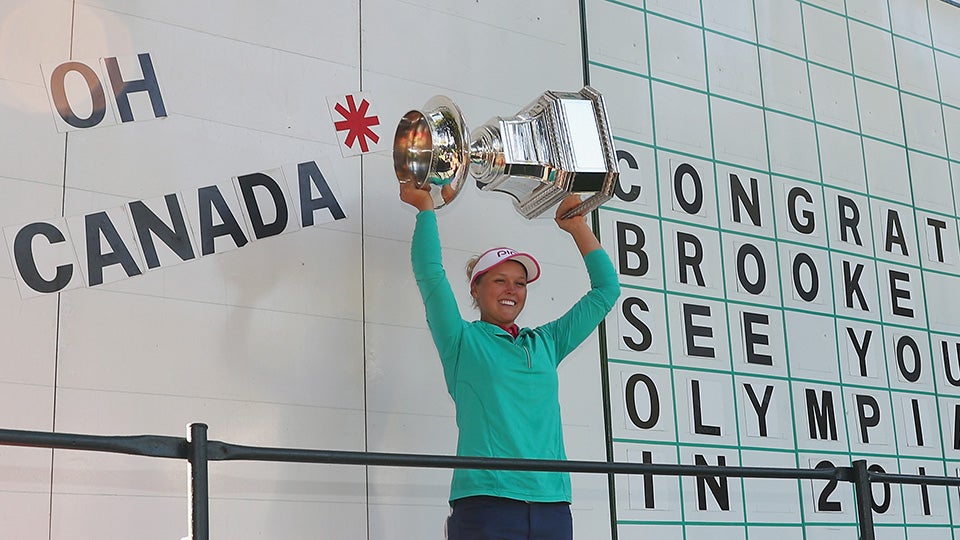 Brooke Henderson poses with the trophy after winning the 2016 KPMG Women's PGA Championship at the Sahalee Country Club.
Scott Halleran

Canadian Brooke Henderson plays big golf for a young lady. She won her first LPGA tour event (the 2015 Cambia Portland Classic) by eight shots, the largest margin of victory since 2012. She was the low-scoring amateur at the 2014 U.S. Women’s Open, where at 16, she tied for 10th. Henderson’s first major win at the 2016 KPMG Women’s PGA Championship made her the youngest winner of that event and vaulted her to second in the Rolex Rankings.

Not only was your win in Portland your first on Tour, it was historic and granted you your LPGA Tour card for the next season. Talk about a successful day!

It was an amazing win in Portland. It was a dream come true. Just the way I played and the way I felt that whole week was incredible and something that I’m hoping to repeat. You know, I didn’t feel nerves on Sunday until the 18th hole where I knew I had a nine-stroke lead, and all I had to do was not screw up on this one hole and I would have the win. [Laughs] Just thinking back and trying to do the same things every week now, so I can improve a little bit and I can repeat that and that feeling.

You’ve shot to the top of the Rolex Rankings now and are up there with the best of them, at such a young age. How does that feel?

Yeah, it’s super exciting! I remember looking up to Lexi Thompson, Lydia Ko and Jessica Korda, you know, some of the younger players on the tour, and now I’m one of those. Playing with them every week, and in the final groups on the weekend, it’s an amazing feeling. Little kids come up to me now and want my autographs and things like that, but I still want other people’s autographs. [Laughs] I want Juli Inkster’s autograph! It’s just an incredible way to live my life everyday.

Golf is a family affair for the Hendersons. Your older sister, Brittany, is your caddie and your dad is your coach. That must be a really special thing — to have that kind of support.

It is so special. There aren’t many scenarios like ours. Growing up, as a little girl, I wanted to be just like my older sister. She is six years older and I was always with her, following in her footsteps. And our dad is our coach and has been since we were little girls…and, you know, most importantly he is our dad and a best friend to both of us. Being able to spend everyday on the course together is really an amazing feeling. And then you look over at the sidelines and there’s mom waving so it’s an incredible family atmosphere.

You have an opportunity to represent Canada in the Olympics in Rio this year, as defending champions in the sport. What does it mean to you to represent your country?

The Olympics are an amazing thing for the LPGA and all the fans of the LPGA and to see all these countries represented…As a little girl I jumped at playing in the Olympics but I had no idea how I was going to do that or in what sport. I just remembered seeing the passion and the hard work and all the determination that all those athletes put in and I was like, ‘Man I want to be an Olympian.’ Then I found out a few short years ago that golf was going to be back in the Olympics, Canada was defending champion, and I was possibly going to have the chance to do it, so I worked harder to get my ranking up to the position it’s at now and it looks like I’ll be able to go and represent my country.

What’s it like coming back home to Canada, where there hasn’t really been a bonafide golf star there since Mike Weir’s days?

Going back home to Canada, whether it’s for the Canadian Open or Manulife — or just going home to relax — people stop and want to talk to me. I know the whole country is behind me and that as a whole is incredible. But not only Canada, you know, I’m building fans all over the world and in the U.S., everywhere, in many different countries. Building my fanbase is really a lot of fun and getting to know some of my fans is really special.

Every week out on tour since I was an amateur, I’ve played for Team Canada and I’ve worn the maple leaf on my shirt. Announcing, ‘On the first tee, from Canada…’ I’m always extremely proud. I don’t see [the Olympics] being much different. It’s against pretty much the same players I play against every week on the LPGA tour. Hopefully I can defend Canada’s gold medal and go and win.

So how did you settle on golf as the sport you picked?

I think [golf] is incredible for people of all ages. I started at age of 3 and my great grandmother was playing in her 90s. It’s a game full of integrity and perseverance and many great values, and I think if we can open up those doors to many people that’d be awesome.

How do you think the LPGA can open up doors to get more people involved in the women’s game?

I think the LPGA is really good with interacting with the fans and doing a lot charity work and things outside of the game of golf, which, I think, is really relatable to a lot of people. If we just continue to do that and kinda reach out to fans who may not necessarily like the game of golf but like what we are doing outside of golf and bring them in, they may play the game.

In your short time on tour, what’s your biggest takeaway from being on the LPGA?

I think that the most important thing for me in the LPGA is living my dream every single day and being able to wake up and do something that I love. I get to meet so many incredible people all around the world, whether it’s players, fans or supporters of the game, and it’s just an amazing way to live my life.