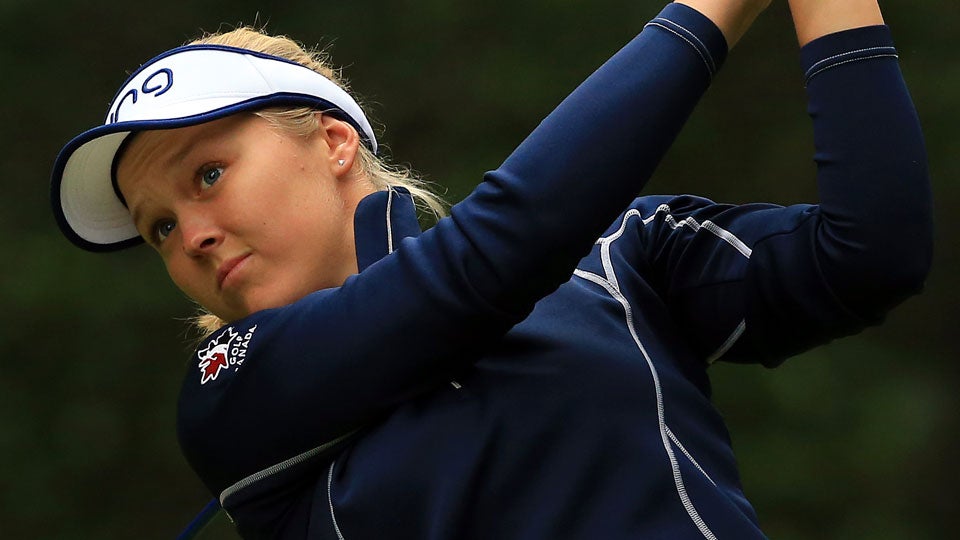 Brooke Henderson is a three-time winner on the LPGA Tour.
Getty Images

“It’s really exciting to meet actors like Jack and get to meet awesome athletes,” Henderson said. “It’s kind of eye-opening for me to see the different talent and how they can go from their careers and go to golf, which is secondary to them, but they’re really, really good. I’m excited for the week.”

The women will play from the same tees as the senior professionals in the modified Stableford event at Tranquilo at Four Seasons Resort Orlando. The LPGA Tour and PGA Tour Champions players are competing for a $750,000 purse, and the celebrities are playing for $500,000.

“To be able to play with Colt Ford and Jake Owen tomorrow is awesome,” Daly said. “They are good buddies, and we’re going to have a nice time. That’s kind of what it’s all about.”

“Whenever you have the opportunity to give back and show others that you care about them and playing golf for a great cause, you can’t beat it,” said Peterson, who will open with Arizona Cardinals teammate Fitzgerald alongside Perry. “I’m happy that I got the invite. Wish I was playing (football) this weekend, but it’s a great getaway to kind of relax and let the football life go for a couple weeks.”

Mulder is grouped with Thompson and Mardy Fish, the former tennis player who won the title year when it was a celebrity-only competition.

“It’s become a little bit more normal, I guess, the more and more of these tournaments I play in,” Mulder said. “It’s still not a great feeling on the tee. Baseball is what I did, and now it’s kind of turned into golf. I was never nervous on the baseball field, but this isn’t technically what I do.”