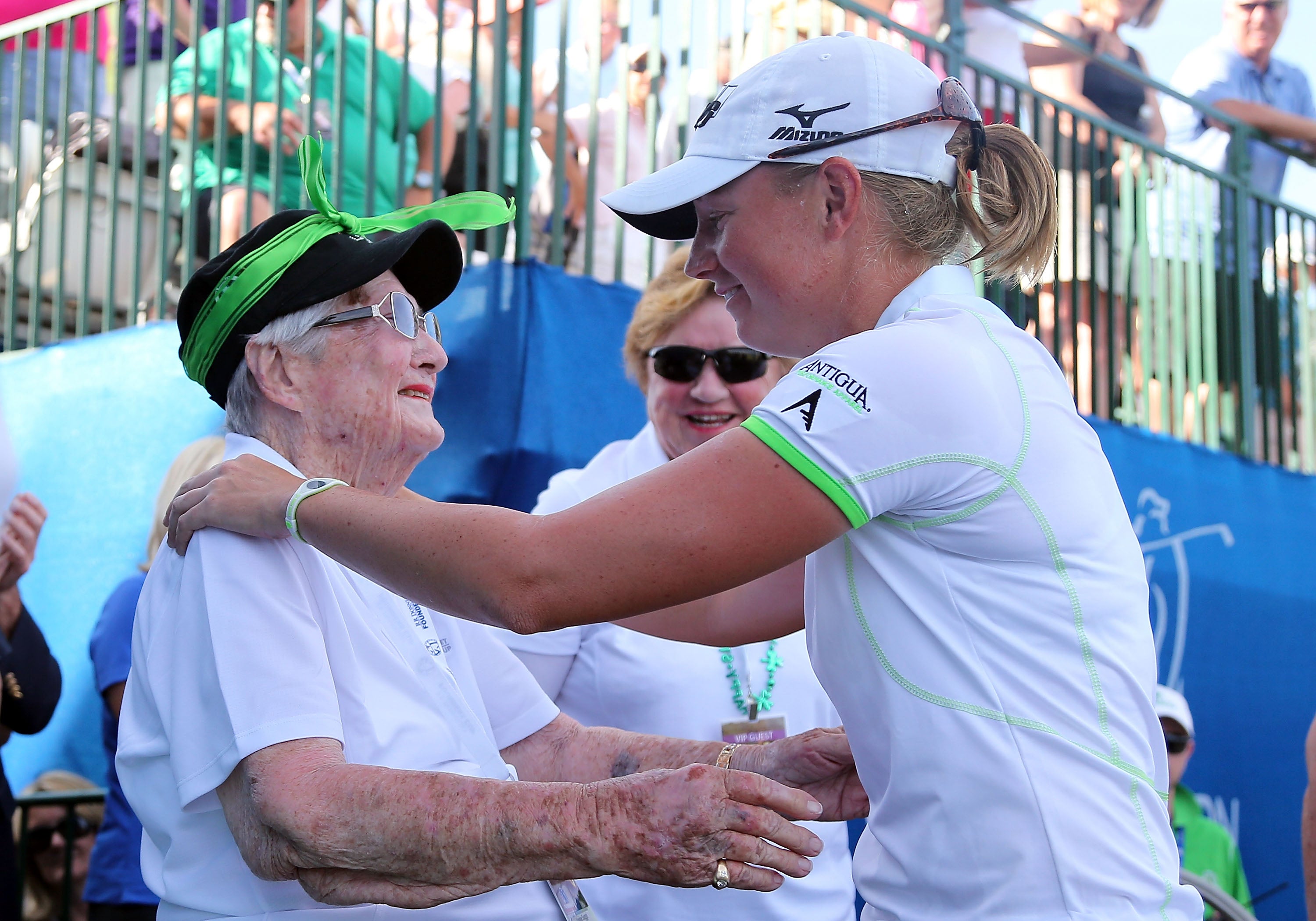 Louise Suggs, an LPGA founder and one of the greatest female golfers of all time with 61 wins and 11 majors, died Friday. She was 91.

The LPGA Tour said she died in Sarasota, Florida, of natural causes.

Suggs was perhaps the most influential player in LPGA history. Along with being one of the 13 founders in 1950, she served as LPGA president three times and was inducted into the World Golf Hall of Fame and the LPGA Teach and Professional Hall of Fame.

“I feel like the LPGA lost a parent,” Commissioner Mike Whan said. “But I’m extremely confident that her vision, her competitiveness, and most importantly her spirit will be with this organization forever.”

The LPGA Tour rookie of the year award is named after Suggs. She won every season of her professional career, including nine times in 1953, and she became the first player to capture the career Grand Slam at the 1957 LPGA Championship.

A steady presence at LPGA majors and Solheim Cup matches she could attend, her support of women’s golf never wavered and Suggs never lost her sharp tongue. She was at the LPGA awards dinner in 2007 where Angela Park won the Louise Suggs Rookie of the Year award by making $983,922.

“I wish like hell I could have played for this kind of money,” Suggs said. “But if not for me, they wouldn’t be playing for it, either.”

Her efficient, powerful swing marked her for greatest as a teenager in Georgia. Along with winning state amateurs, Suggs won the 1947 U.S. Women’s Amateur, the 1948 Women’s British Amateur and the 1949 U.S. Women’s Open, beating fierce rival Babe Zaharias by 14 shots, which still stands as the record margin of victory.

Ben Hogan once said after watching Suggs swing that her swing “combines all the desirable elements of efficiency, timing and coordination.”

“It appears to be completely effortless,” Hogan said. “Yet despite her slight build, she is consistently as long off the tee and through the fairway as any of her feminine contemporaries in competitive golf. And no one is `right down the middle’ any more than this sweet-swinging Georgia miss.”

Bob Hope once nicknamed her “Miss Sluggs” for how far she could hit the ball.

“Like a parent, she cared deeply for her LPGA family and took great pride in their successes,” Whan said. “She always made time to hear my problems and challenges. Her personal guidance was priceless. Like a parent, I think she was even more proud of the LPGA players of today than she was of her own playing results.

Born in Atlanta on Sept. 7, 1923, as Mae Louise Suggs, she began playing golf on the Lithia Springs golf course that her father managed. She won the Southern Amateur Championship and began piling up big amateur wins – the Georgia Women’s Amateur twice, the North and South three times and the Women’s Western Amateur twice.

She was a contemporary of the great Bobby Jones, her idol in Georgia. And long before Annika Sorenstam made headlines for playing on the PGA Tour, Suggs had her own famous competition against the men.

She took part in a 72-hole exhibition on what she once described as an executive course in West Palm Beach, Florida, in 1961. It was called the Royal Poinciana Invitational, featuring the likes of Suggs and Patty Berg, Sam Snead and Dow Finsterwald.

Playing 36 holes a day, and lacing her beloved 3-wood onto the greens, Suggs wound up winning. Recounting that event in a 2003 interview with The Associated Press, Suggs said Snead was irritated that he had finished behind a woman and was needling her.

“I finally said, `I don’t know what the hell you’re bitching about. You weren’t even second,'” Suggs said.

“It was the most perfect squelch I ever heard. He burned a quarter-inch of rubber,” Suggs said.

That story captured the essence of Suggs. She had a drive to succeed and told it how she saw it. The founders of the LPGA paved the way for today’s game, often going to cities and doing promotions to attract attention. They had to set up the golf courses by themselves and cope with complaints and challenges.

She retired in 1962 from competition, but not from the LPGA Tour.

She taught at Sea Island on the Georgia coast. She attended the majors, including the first one for the women at St. Andrews. She was fixture outside the clubhouse at Augusta National at the Masters. And last year she published her autobiography with the perfect title: “And That’s That!”

“Golf is very much like a love affair,” Suggs once said. “If you don’t take it seriously, it’s not fun. But if you do, it breaks your heart. Don’t break your heart, but flirt with the possibility.”

Suggs was the first women elected to the Georgia Athletic Hall of Fame in 1966, paving the way for women to become future inductees. The USGA honored her with its prestigious Bob Jones Award in 2007. And earlier this year, Suggs was selected to join the Royal & Ancient Golf Club when it finally invited women.