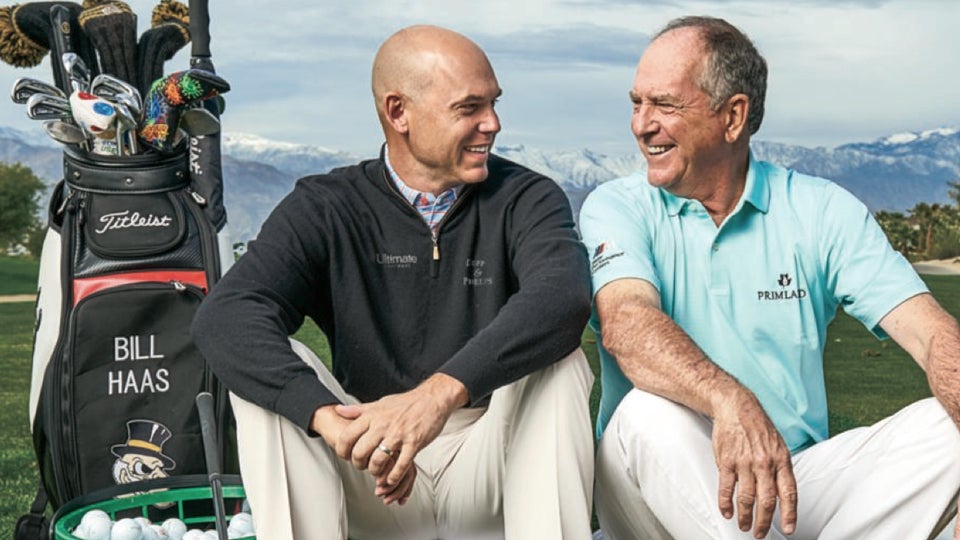 With 32 wins combined, Jay and Bill Haas might be the best dad/son duo ever on the PGA Tour. As Father’s Day approaches, the two talk family ties and finding redemption 20 years after a haunting loss.

Bill, what was it like growing up with a Tour-player father?

BILL: I guess I didn’t know any different. He was just my dad. Certainly, as I got older, I began to realize that what he did was different from most dads, and that made me appreciate it a little more. He didn’t get drafted to be a player on Tour, he earned that right. Even at a young age, I was very proud to say that I had a dad on the PGA Tour.

Jay, your sons, Bill and Jay Jr., managed to reach the Tour. What did you do to nurture them as players?

A lot of coaches would say there’s a time when Dad has to stop coaching. How did you walk that line?

JAY: I think I’m still walking that line. I’m not one to push myself on them. I hope they feel that way, because I didn’t like people telling me what to do.

What’s your perspective, Bill? How did being coached by your dad feel through the years?

BILL: I always looked at him as the guy who knew how to do it—and who proved that by doing it. I viewed my dad as the guy I needed to listen to if I wanted the correct answer. Now, there were times when he would give me a tip and I would say, “Well, that doesn’t feel good.” And I remember it very clearly: His response was usually, “If you want it to feel good and keep hitting bad shots, then don’t change.” [Laughter.] That was his way of explaining that it’s not easy to get better. You have to work at it. Did having a Tour winner for a father increase the pressure as you rose in the pro ranks, or did you feel more at ease knowing what to expect?

BILL: By watching my dad and knowing how good he was, I think I understood how difficult it was to win. Even as I got an ego about myself and my game, I still knew I wasn’t as good as my dad.

Jay, is there a good story about the first time Bill beat you?

BILL: I thought it was New Year’s Day.

JAY: New Year’s Day, probably 2000. We played at the Cliffs at Keowee Vineyards, in South Carolina. I shot 72, maybe, and Bill shot 70 or 69. It was the first time he’d officially beaten me, and he said, “That doesn’t count. You didn’t play well.” And I said, “No, I was trying my hardest every shot, so it sure does count,” because when [my sons] were younger, I told them, “I will never make it easy, I will never let you win, because then it’ll be a hollow victory.” Every time we did play, I would almost try harder, to make it tougher on them.

Would you say your swings are alike?

JAY: There are a lot of similarities, but he’s three inches taller, with a stronger, bigger arc. But if you look at our finishes, they’re almost identical. I think he’s a much better player than I ever was.

Let’s go back to that magical moment at last year’s Presidents Cup. Bill, you were one of your dad’s captain’s picks, and you ended up winning the clinching point for Team USA with a dramatic victory over Sang-Moon Bae.

BILL: It was the best moment I’ve had in golf. I remember standing on the 18th green after it was over, shaking hands and getting hugs from the best players in the world, and then hugging my mom and dad.

JAY: Coming down the last hole, after they tied the match at 17, I was hopeful that Bill could withstand the pressure. I had the same opportunity at the ’95 Ryder Cup. I was 1-down going into the last hole, and if I won it we’d tie the match and retain the Cup. All the players were there, all the caddies, both captains, fans. And I failed. I made a mess of the hole, and Europe won the Cup. So I was hopeful that Bill would do it for himself, to take those memories forward.

BILL: It’s a team victory, and that was just one match, but that moment for me, getting handshakes from Jordan Spieth and Phil—I’ll remember it as a bigger deal than any individual achievement.

JAY: It was a moment I’ll never forget. I think about it almost every day.

What quality are you most proud of in each other?

BILL: I’m proud to say that my dad has won nine times on Tour, 17 times on the Champions Tour, and was a Presidents Cup captain. But I’m also still waiting on the guy who says, “Hey, I played with your dad in a pro-am in the “80s, and he was such a jerk.” [Laughs.] It hasn’t happened yet. Everybody says what a great guy he is. That’s what I’m most proud of. I have two boys, and I try to raise them like I was raised.

JAY: Yes, kind of the same thing. Watching Bill parent reminds you that golf’s not everything. It’s not about how many tournaments you win, or how big your house or your car is. It’s about how you treat other people. And he’s done a great job of that.